The Revenge of the Rockerzine Goody Guide: 23 Rocking Gifts!

Is holiday time here again?  How is that possible since it’s 50 degrees in Boston?  But we digress!  We bet you need some ideas for what to get yourself, uhhhh…  your friends this holiday season so let us away to the list!

(and thanks again to our staff contributing to this article – Erin Amar, Kelly Patterson, Amy Prohaska, and Keith Valcourt) 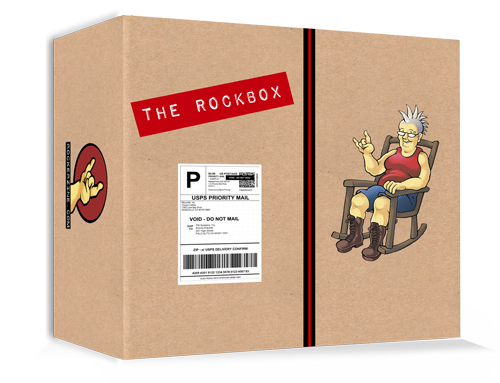 Well, we hate to be biased, but why shouldn’t we be?  Rocker’s superfantastic box o’ rock n’ roll fun would be good for any music fan on your gifting list, including you!  Buy the $40 version and get a copy of Jonathan Richman’s limited edition single “Keith” a love song to Rolling Stone Keith Richards, along with a bunch of other weird, fun, and informative rock n’ roll stuff sourced by the Rocker staff! – EA 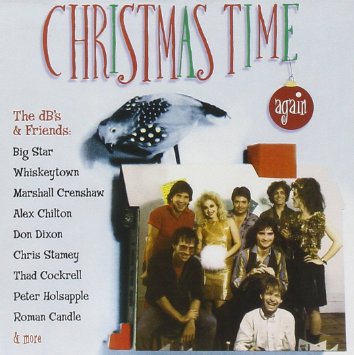 Christmas music is cheesy, monotonous, and not cool, unless it’s The dB’s and Friends CD!  This ever-expanding album sees its third CD release (4th if you count the original 1986 ep) with even more pals joining in the festivities.  The guest list includes everyone from Mike Mills (REM), to Jeff Tweedy (Wilco) with Yo La Tango, to Don Dixon, to Marshall Crenshaw. My favorite song is Robin Hitchcock’s wonderfully creepy and odd “The Day Before Boxing Day.” This disc is sure to turn your holidays hip! – KV

Were there ever truer words sung than these?  OK, seriously, we’ve never really understood what Suburban Lawns’ underground hit single from 1980 “Janitor” was about, but that doesn’t seem important to it’s inherent awesomeness. A freaky squeaky singer still wearing braces, a minimalist retro rock guitarscape, and a herky jerky new wave beat is all we need.  That’s why we’re so glad the folks at little UK indie label Futurismo decided to reissue this fine album for a whole new group of fans to rediscover. “Nuclear Reactor.  Boom Boom Boom Boom.” – EA 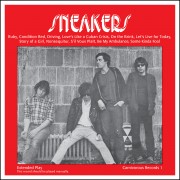 In a list of underrated “Power Pop” bands that deserved better, Sneakers have to be up there with The Shoes, The Records, and The Posies. This band launched Chris Stamey, Will Rigby (later of The dB’s) and super producer Mitch Easter of Let’s Active. This “Best Of” is a prime slab of raw talent and young ambition achin’ to be heard, spread over eleven tracks (ten originals and a cover of “Let’s Live For Today”). Sneakers is a must own for fans of jangly guitars, massive pop hooks and brilliance in general. – KV 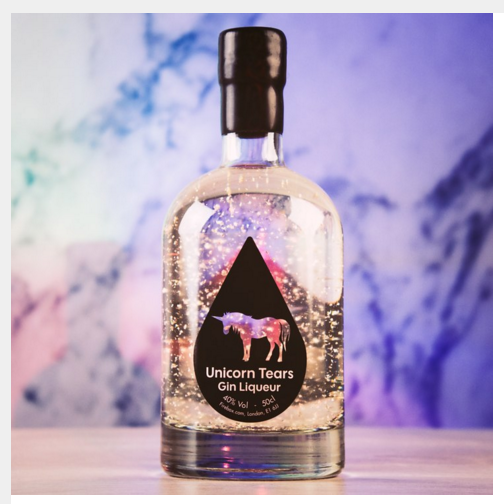 It’s pretty. It’s sparkly. It’s boozy. And it has a unicorn on the label. And gosh it’s just plain magical. – AP

Let’s face it: your friends love booze, but it can be an expensive gift. Make ordinary spirits special by infusing light rum or vodka with a split vanilla bean, a few cinnamon sticks or a handful of coffee beans. These infuse quickly, so you have plenty of time to create a special bottle of booze for your favorite drinker. Check home and craft stores for decorative bottles they’ll keep long after the hooch is gone! – KP 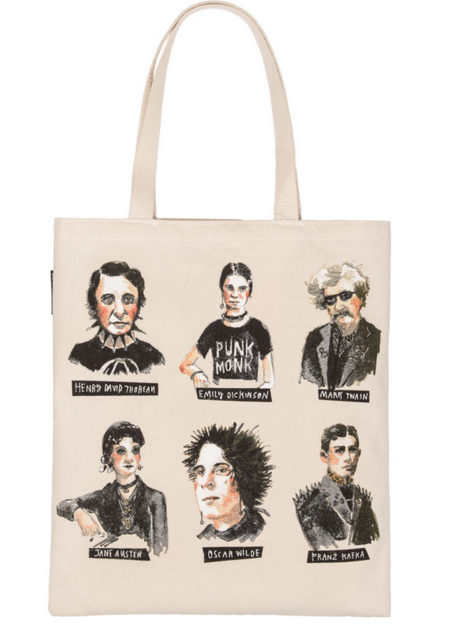 Got any badass literati on your shopping list? We’ve got you covered. Here’s a tote with Oscar Vicious and Wilde; Franz Jello Kafka and Emily Dickinson, the original punk poetess. Yeah, it kinda rocks! – AP 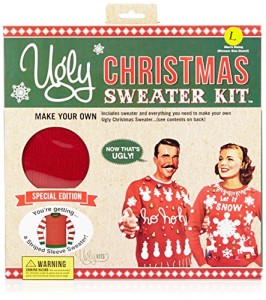 If someone you know is the type to rock an ugly Christmas sweater, help them to take it a step further and personalize it! Assist them in making a real fashion statement this year! – KP 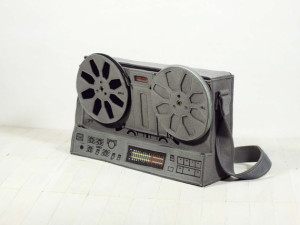 Any music geeks on your shopping list would LOVE this bag. I mean they would “reely reely” like this Reel to Reel Bag. – AP 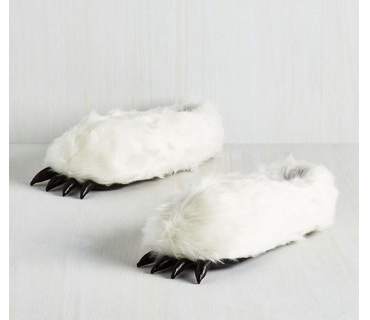 Cold toes, warm yetis, that’s a saying, right? Cause these sweet Yeti slippers plug into any USB junction and will quickly warm up your toesies. Perfect for the cryptozoologists on your list. – AP 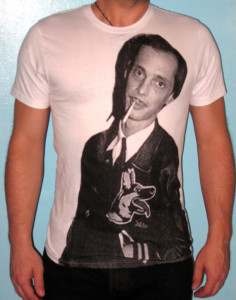 You’d usually never catch me dead in a white t-shirt, but there’s something so right about this black and white image of the young John Waters smoking on white. It’s so… sleazy.  And that’s why it’s awesome. – EA 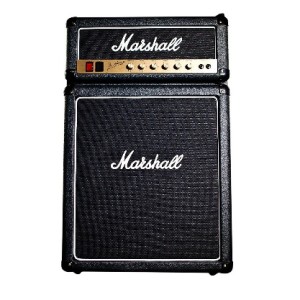 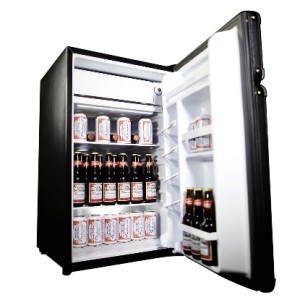 This is a present that goes to 11. And it’s cool. And it keeps things cool. See what we did there? It doesn’t get much better.  – AP 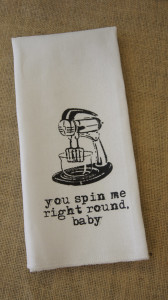 You Spin Me Right Round dish towel –  $8

It seems unlikely Dead or Alive’s Pete Burns had considered that his 80’s hit could have easily been about a very non-musical mixing machine.   But that’s no reason this doesn’t rock out. – EA 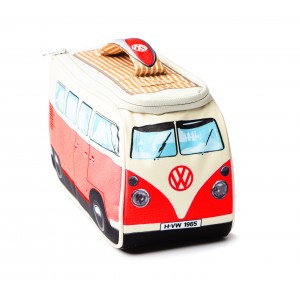 Cowabunga Dude! This lunch bag with its surf board handle is totally far out. So if you heading out to hang ten, don’t forget to pack a lunch. – AP 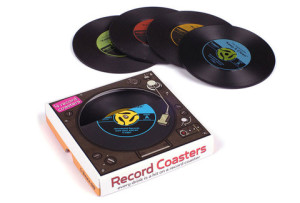 These coasters spin but they don’t leave rings. No matter if you know someone who’s a little bit country or a little bit rock n roll these 45s will be a perfect solution. – AP 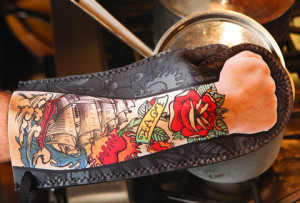 If you have a friend who keeps talking about getting a tattoo, why not get this one? Plus it’s always helpful to have an extra hand in the kitchen especially during the holidays.  – AP 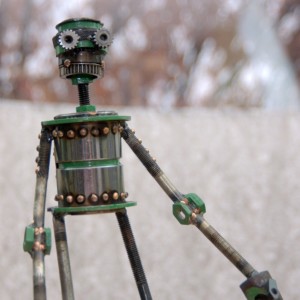 So many people would love a bundle of bolts,… err… we mean joy..  at holiday time. Massachusetts artist Skunk creates these amazing robots (also ray guns and rocket ships!). These robots need homes and would be a perfect gift for those needing something with a bit of steampunk flair! – AP 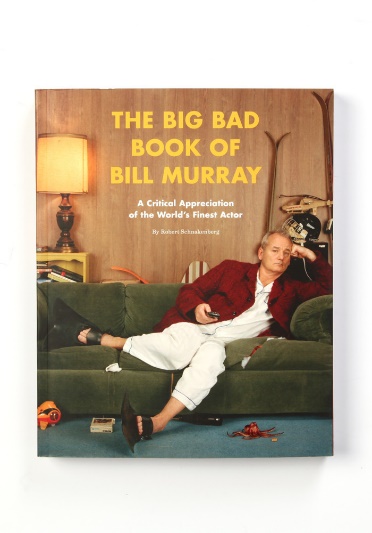 Tallahassee:  I’ve never hit a kid before. I mean, that’s like asking who Gandhi is.

Pretty much every one of a certain age has a love of master comedic star, poignant indie movie mainstay and wacky celebrity known to crash parties and photobomb random people on the street, Bill Murray. So who wouldn’t want a book that tells the story of Bill Murray aka Dr. Peter Venkman, aka  Carl Spackler, aka Frank Cross, aka Vincent, aka Herman Blume, aka Hunter S. Thompson, aka Bob (and, yeah… what about Bob)? – AP

THE SPIRIT OF THE SEASON 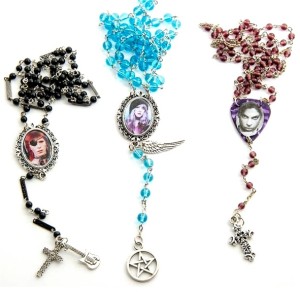 Leaving conventional religion behind in favor of something more pop culture?  These fantastic Rock and Roll Rosaries from Columbus’ What the Rock? can help you invoke the power of the rock gods. For instance, the Lux Interior model could perhaps help you resolve issues with a cantankerous Garbage Man, or pray the David Bowie one to find out if there is Life on Mars.. – EA 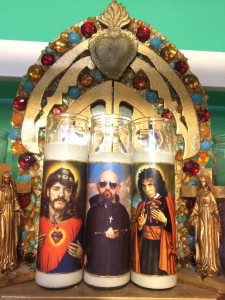 Whether you find salvation in Dio, Rob Halford, or Lemmy, burning this trio of novena candles featuring the metal gods seems the perfect choice for clearing your aura of things that do not rock and inviting those that do into your life. – EA 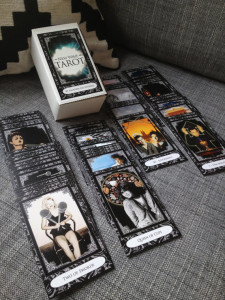 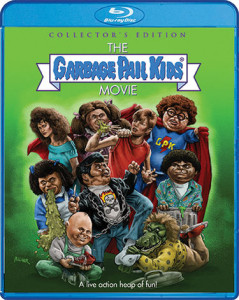 Just when you think all of the great films in the history of the cinema have been released on blu-ray, this so-bad-it’s-good gem comes out! This classic cult film “The Garbage Pail Kids Movie” was based on the ultra-popular collectible cards of the 1980s, but this live action film stars English song and dance man Anthony Newley who spends most of the movie looking confused as to how the hell the guy who wrote the music from “Willie Wonka” ended up acting with kids in creepy costumes.  For a slice of dumb fun you need to stuff this in your stocking. – KV 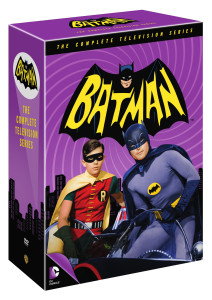 Holy Box Set Batman! It’s finally here! All of the original Batman TV shows (that’s three seasons, citizen) are gathered up in this “Bat-tastic Box Set.” They are remastered and look amazing, with Caesar Romero literally jumping off the screen in vibrant purple and orange. Plus, there are so many bonus features you’ll find yourself saying BAM! WHAP! WOW! – KV 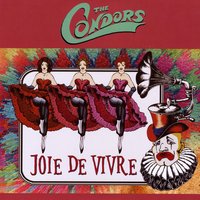 “An ace little six track E.P dealio which holds the “all killer, no filler” credo close to it’s Telecaster-toting heart.” 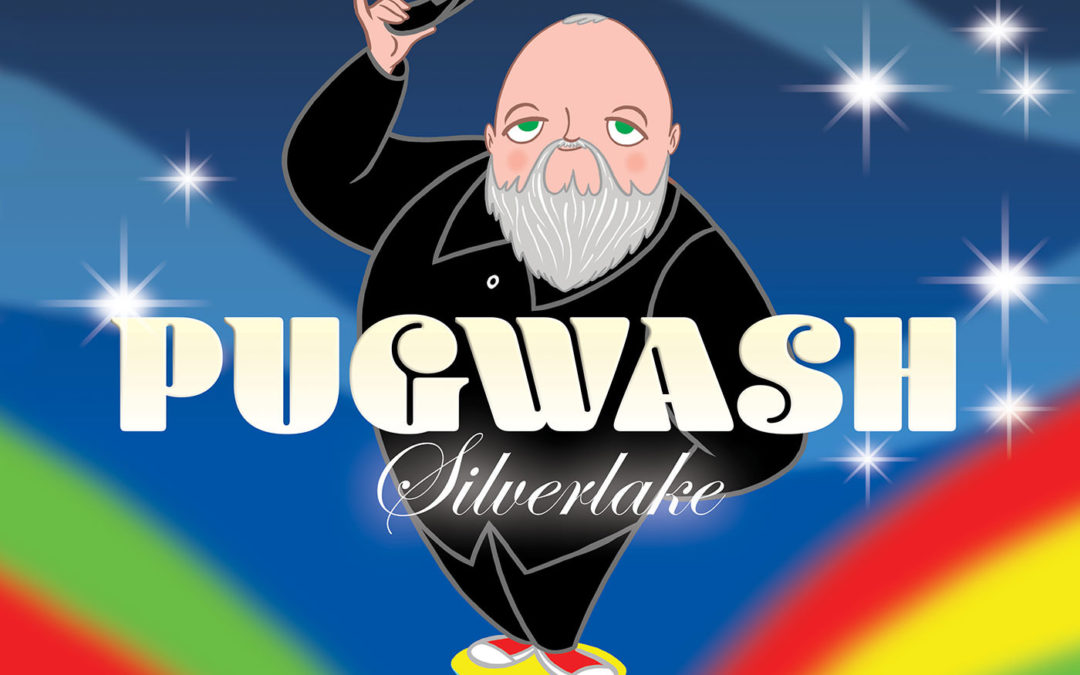 With a infectious lead single, and Jason Faulkner at the helm, how many rabbits can the Irish pop sensation pull out of a hat on their 7th release? Tons!

Reviewed: Lonesome Lies Before Us by Don Lee

While Lee’s depictions of carpet-laying and hotel room tidying are, top notch, can his novel about an aspiring guitarist trapped in a dead end job learn to sing? 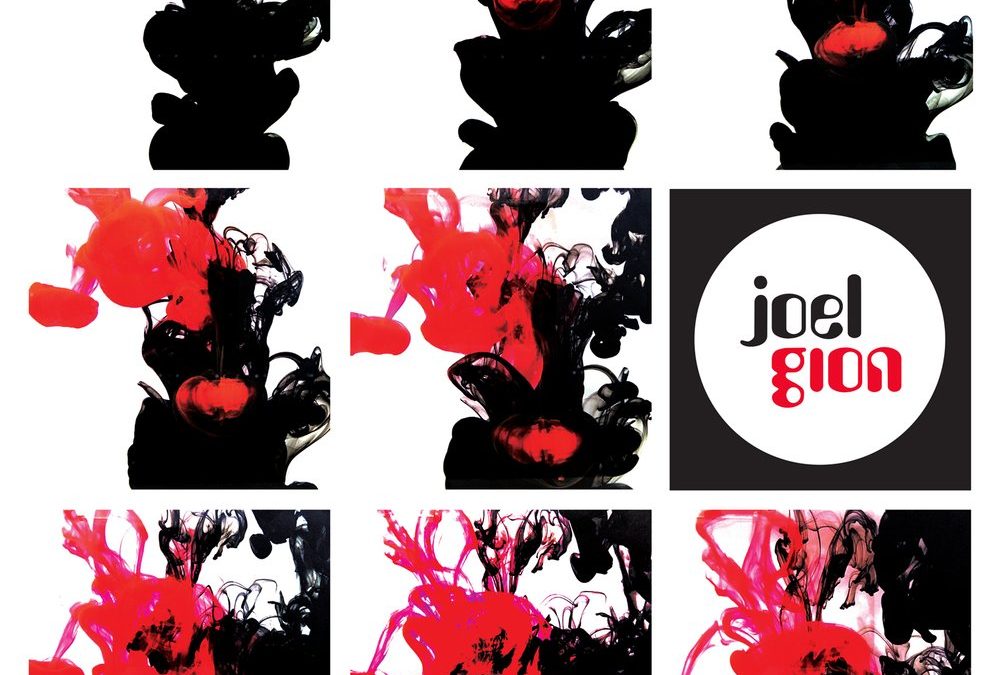 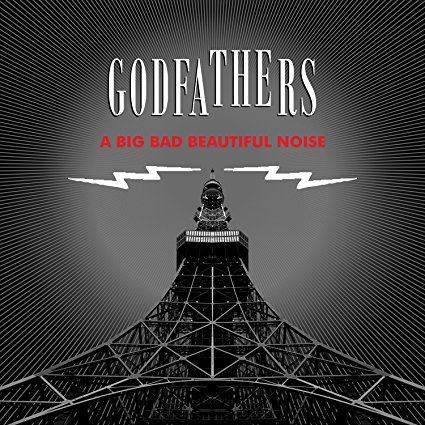 Rarely has an album title so perfectly captured its contents: The piss and vinegar of the Godfathers at their glorious British rock and roll finest.