A mystery that takes place in the 1980's Boston club scene? Sign us up! We chat to Author Clea Simon about youth, nostalgia and forgiveness.

Before Clea Simon became known as a world-class mystery writer, she was a music journalist in Boston. During the ‘80s she was writing regularly for Boston Rock, the Herald and a few national publications, and has the battle scars—and a closet full of vintage vinyl and cassette demos—to prove it.  Clea and I shared many a life-changing show in those days, and we can both claim bragging rights for being at the Rat the night Husker Du opened for R.E.M.

Yet the majority of her dozen-plus published mysteries don’t involve music—though they do involve journalism, Harvard, futuristic dystopias and quite a few cats. That changes with her latest, “World Enough”, is a stand-alone mystery set in the fabled Boston club scene. Her heroine Tara Winton found solace and a surrogate family in clubland, while keeping herself apart from the drugs and darker side. Twenty years later, she attends a reunion gig, learns what’s happened to some old friends, and comes to realize the unreliability of her memories.

We had the following conversation by email in early January: 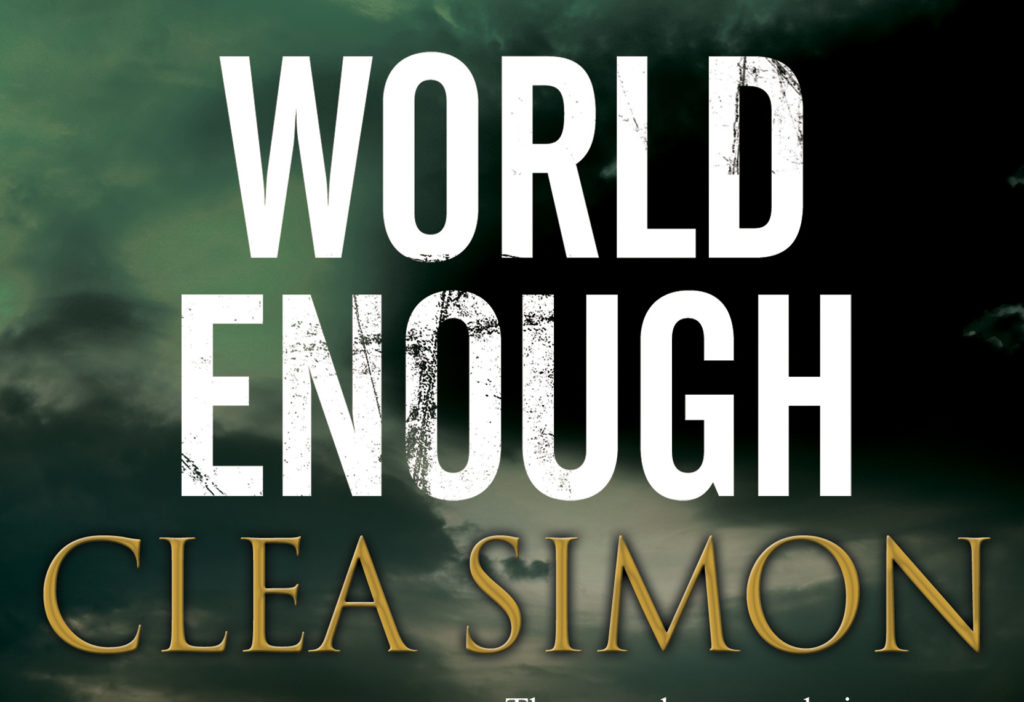 Rocker: You were well-known in Boston as a music critic during the 1980s, writing regularly for the Boston Rock and the Boston Herald and had a few pieces in Rolling Stone. Yet music hasn’t really figured in the books you’ve written up to now. Did it feel like a reconnection to write “World Enough”?

Simon: Yeah, it was. It feels like that was another life, in a way, and it was really fun to apply the new-life rules and skills – knowing how to construct a novel-length story and plot a mystery – to those old memories and details. Maybe I had to make a bit more of an effort to access that time and those feelings, but listening to old records and tapes – the Throbbing Lobster compilations! – really brought it all back, as did going out to hear some bands.

I don’t go out to as many shows as I used to, but when I do, I feel the same excitement. In fact, a few years ago – I don’t even want to say how many – I realized something. Sometimes, I’ll go see a band and think “I’m too old for this.” Then I’ll see another band and just get caught up, loving it – and realize that it wasn’t that I was too old for the first band, but that the first band sucked!

Rocker: In the book, “World Enough” is the name of a Boston band’s local hit. The lyric are quoted at a couple of key points in the narrative. To my mind it has a certain quality that makes it very convincing as a Boston rock song– kind of hopeful yet angst-ridden!  Did you give a lot of thought to how the song would go?

Simon: Well, I knew I wanted to use the Andrew Marvell poem (“To His Coy Mistress”). I figure, some band member read it in high school English and thought he could use it. It’s kind of a natural – its narrator is urging his mistress to have sex with him, basically, while they’re still young enough to enjoy. She clearly thinks she has better uses for her time.  So it’s a natural for a rock song. But I also liked it because it’s all about the fleeting nature of youth – and about how we choose to make use of that time.  I did my best to couch it so it wasn’t too pretentious. If it sounds like a real song, I’m glad.

Rocker: Lots of aging Boston rockers seem to have sentimental memories of the Rat and the heyday of local rock (a heyday for us anyway!) As a mystery writer your take is bound to be a little darker, but did you also mean for this book to be a bit of a reality check, especially as pertains to women on the scene?

Simon: Not so much a reality check about the scene as about ourselves – the nature of memory and nostalgia. It’s not just rockers. As we age, it’s natural to look back on our youth and see it as a golden time. Everything was new – to us – and we had boundless energy. I think that’s largely the basis for a lot of nostalgia – it’s not that the earlier time was golden, but that we were. We’re missing our youth as much, or more, than a particular external era. But in Tara I also tried to craft a protagonist who is essentially unreliable: she needed a certain kind of experience and so she found it. Only over time does she – do we – call into question how much of that familial, tribal experience was really in her head and not there in reality. As Tara and the reader begin to realize this, I want readers to question everything she has stated as fact – much as she is.

Rocker: You just raised the point that there’s a lot more going on in this book than the musical and nostalgic angle. Can you talk a little more about some of the other themes in it?

Simon: The rock scene is the setting, but I think it’s more about memory and about coming to terms with the world – with ourselves – as we age. It is also, of course, about forgiveness – what we can forgive in ourselves and others, and what we can’t. The book ends with a cliffhanger that centers on that very question. How much can we let go? How much do we want to?

“World Enough” can be purchased at Amazon, Barnes and Noble and Indiebound at the Author’s website www.cleasimon.com/book/world-enough