Anvil. The Rolling Stones. Both together 37 years. Both touring. But who puts on a better show? We head to a tiny industrial town in the UK to find out.

The Rolling Stones had been together for 37 years in 1999. To celebrate, they undertook the “No Security” tour, playing over 40 shows in North America and Europe and grossing $88.5 million from over a million tickets sold.

In 2018, Anvil have been together for 37 years and they find themselves playing in Bilston, an industrial town, 18 miles from Birmingham UK, to 300 people. Which band do you think, had the most fun?

If you answered, “A. The Rolling Stones”, please try again.

Anvil take the stage with absolutely no fanfare; no portentous opening music for these boys. They wander on, spend about two minutes fiddling with their amps and tuning up, before commencing the unrelenting blitzkrieg that lasts for the next 90 minutes. The first thing you notice is how well singer/guitarist Steve “Lips” Kudrow is bearing up. I can’t imagine he leads a particularly macrobiotic lifestyle, but he seems in rude health, with just an enlarging bald spot hinting at his age. He’s a sprightly 62, by the way. I don’t know what your dad was doing when he was 62, but it probably wasn’t scuttling around a stage in a cut off T shirt, playing the pointiest Flying V guitar in the world. If he was, please send some photographs, c/o rockerzine.com.

You don’t need a pretend, part-time “music journalist” to tell you [you are not pretend Ian, only the money we pay you to write is – Ed.] what they sounded like. Drummer Robb Reiner (no, not the “Spinal Tap” guy) plays every song like it’s the end of a song and the new boy, Chris Robertson on bass, looks like he’s just been let out of a secure facility for the day. He’s perfect for Anvil. They rip through their back catalogue and look like they’re having the time of their life – apart from Reiner whose expression resembles that of a father whose son has just come out as gay to him over dinner and is trying to process this information.

In spite of all the gurning, songs about pounding stuff and the occasional curse words, the thing that you notice about Lips is how nice he is. He seems genuinely grateful to the audience for coming to see the band, and interacts with the crowd in a way that is sincere and never embarrassing. For a frontman in a metal band, this may be unique. He namechecks the Anvil movie, and dedicates songs to Lemmy, as well as the band’s recently deceased producer Chris Tsangarides. The small but enthusiastic crowd lap it up. If he put a nice sweater on and sorted his hair out, your mother would love him.

There are a couple of songs which may cause the casual observer to raise an eyebrow. During “Mothra”, Lips pulls out a vibrator (yup…really) which he rubs on his guitar neck, while Robertson simulates the approach of a colossal sentient caterpillar by lurching around the stage. Both of these men can vote. The other “what the..?” moment occurs when Lips reveals that their next song, with  the charmingly non-PC title “Bitch in a Box”, is actually about the trials and tribulations of using a GPS. Who knew? Just to ramp up the bizarreness, there are actual, bona fide harmonies on this tune, too.

Drum solo, you say?  Sadly, yep. You can tell that Reiner is an outstanding drummer with almost superhuman stamina, just by listening to the songs. Why he (and every bloody hard rock drummer that ever lived…) feels the need to clatter about their instrument, unaccompanied, for five minutes, escapes me. There are times when Reiner’s flailing sounds like a badly loaded pickup truck full of scrap iron, driving at high speed over a never-ending cattle grid. Why, oh Lord, why? Unless it’s there to give Lips and Robertson the opportunity to rub on some embrocation.

Ninety minutes passes quickly. I didn’t think I was going to enjoy this show half as much as I did. I didn’t run to the merch table and buy two of everything, but I left happy. it wasn’t all good news – aside from the aforementioned Dr*m S*l*, “This is Thirteen” was pretty turgid, but other than that, it was a good, solid metal show. And Lips sings in an adorable Canadian accent and who doesn’t love that?

They finish with “Metal on Metal”. Of course. “Metal on Metal ‘til our dying day” go the lyrics. That’s about right. Would I see them again? Yeah. Would I prefer to see Anvil at a club or the Stones at some stadium? No contest – I’d take Anvil any day. And I wouldn’t have to pay seven dollars for a beer. 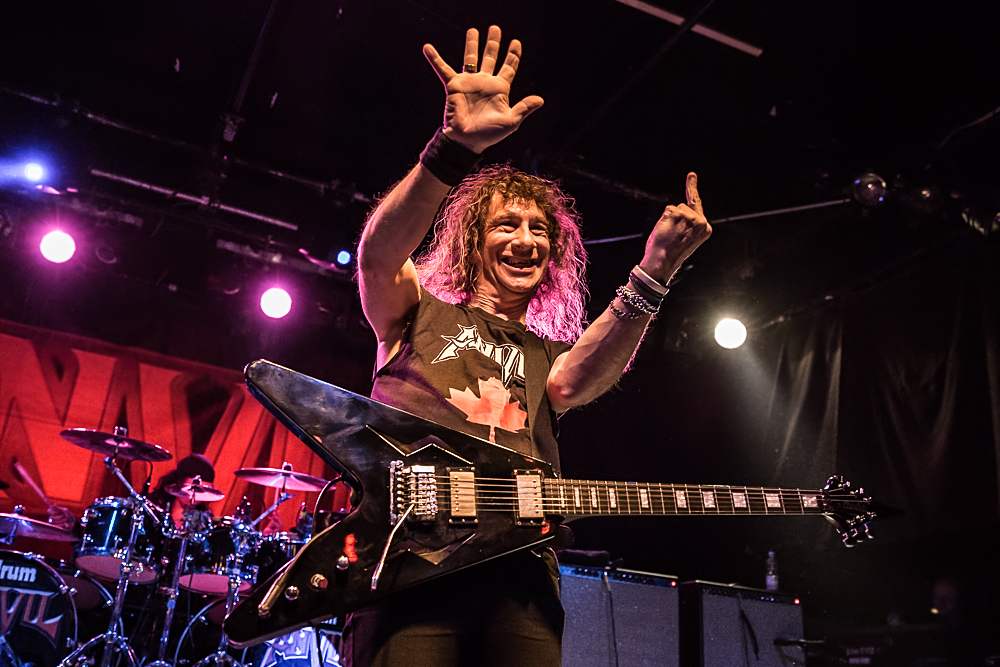