“Thank You, Boston, for being the life blood coursing through my veins.”

This was the final phrase from Alarm frontman Mike Peters as he left the stage of Johnny D’s in Somerville MA. It encapsulates pretty much everything you need to know about the guy. He is grateful, passionate, engaging, humble, and he does not take anything in life for granted. At 56 the two-time cancer survivor continues to tour consistently and is full of infectious energy on stage, letting nothing stand in the way of his message of love, hope and strength. 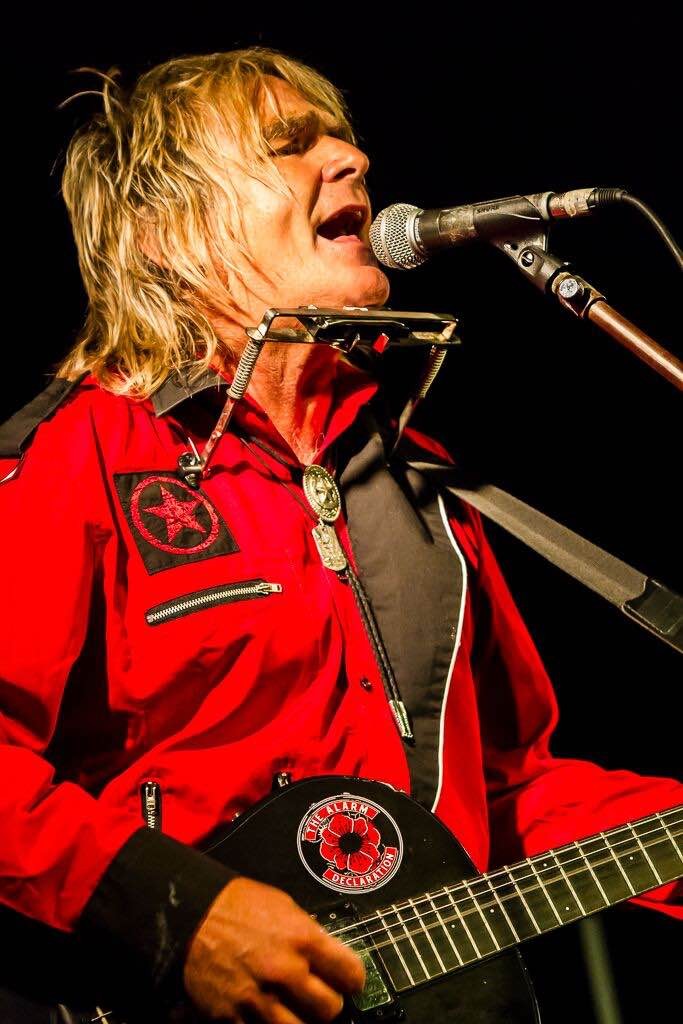 The Alarm rose to prominence in the ‘80s, riding the wave of jangly, guitar-based bands determined to bury the synth-pop that was then dominating the airwaves. Armed with acoustics, high hair and a blue-collar message, groups like Big Country, Dexy’s Midnight Runners, Stray Cats, Red Rockers as well as The Alarm all took part in this revolution under the shadow of the movement’s brightest stars: U2.  The Alarm’s star shone throughout the decade, with the release of 1984’s ‘Declaration’, followed by 1985’s ‘Strength’ and ‘Eye of the Hurricane’ in 1987 providing as good of a 1-2-3 musical punch you could ask for. When it was all over, it would have been easy to sail off into the sunset with this handful of hit records and some great stories, but this is not the case for Peters. He wouldn’t allow his teased-up hair, cowboy boots and “poor man’s U2” rap to be his defining moment. Through a lifetime personal adversity and change, he held the message of the Alarm close at heart, and like the title of one of his band’s early songs kept “Marching On.”

Surely this is one of the reasons hardcore Alarm fans have stuck by him, as shown by the sold-out crowd on a muggy late summer evening in greater Boston. On tour celebrating the 30th anniversary of the ‘Strength’ record,  the crowd was treated to a two-plus hour set of all the ‘Strength’ songs, plus b-sides and various hits; but the real treat was listening to Peters’ unique tales and tour stories in-between the songs, giving them perspective and depth.

For example, before launching into “Majority”, he recalled playing the Hammersmith Palais in 1985, a venue where the roadies habitually would lay long boards across the moat that separated stage from audience so Mike could “connect” with the crowd. This particular night the police had the boards removed – citing a safety violation – but unfortunately, no one told Mike, who went launching out into the darkness only to take a tremendous fall, landing flat on his back!

Or the time Peters was taking a piss, and Joe Strummer walked up to the urinal beside him, then Mick Jones appeared on the other side, and then Topper, and then Paul. “For one minute, I was ‘in’ The Clash, man!” Mike bursts out with little kid abandon.

My favorite was the story of his coming home to Wales after touring, to stay with his parents in his childhood home. Not really living it up like a rock star, his Dad would ask him, “So Mike, when are you gonna give this music nonsense up and get a proper job?”

If you’re wondering how Peters is able to recall so much detail, he shares with the audience a little black notebook – the exact book he took on tour all those years ago, where thoughts, stories, lyrics and ideas are all captured. At one point Peters holds it up and reads the original lyrics from “Spirit of 76”. How different the lyrics were, and what a treat for fans to get this level of artistic insight in such an intimate setting. It was like hearing a grand Irish poem. 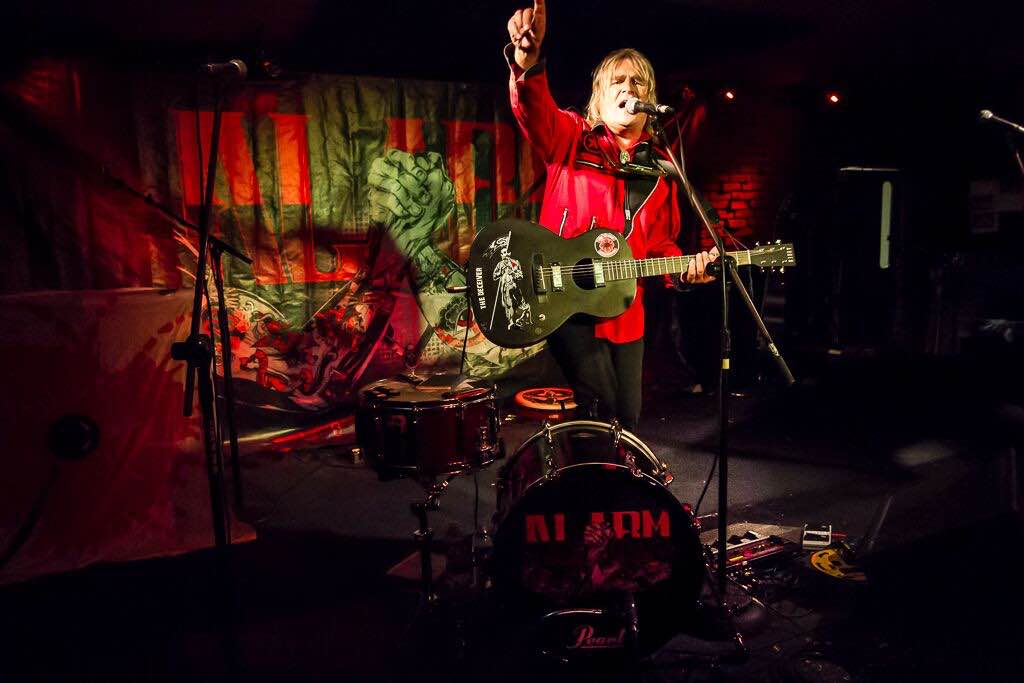 When he was not telling crazy stories, Peters was playing Alarm songs as a one-man band with three microphones set up – stage right, left and center – bouncing between them mid-song so he could maintain eye contact with as many fans as possible.  In addition to his black acoustic guitar, he kept a steady thump on a kick drum for many songs and even worked in some drum patterns and backing tracks with various foot pedals. The results were mixed: on the song “Deeside” it was wildly effective, while on “Knife Edge” it seemed the processed sounds were a little too over the top, taking away from the authenticity of the original.

But regardless of the details of how the tunes were delivered, the crowd were roused by the appearance of the album’s first single “Absolute Reality,” which Peters followed with more ‘Strength’ cuts: “Dawn Chorus”, “Father To Son”, “Deeside”, “Only The Thunder Knows”, and, of course, “Strength”.  By the 90 minute mark it seemed like Peters might be winding down with a couple beauties from ‘Declaration’: “Marching On” and “Where Were You Hiding When the Storm Broke.” But the crowd would not let him go. The table-covered dance floor (a big mis-step on the club’s part) should have been trashed like a Nirvana video as concertgoers rose up, danced, clapped, and screamed along to the songs, pushing the show toward a tidal wave of joyful abandon that crashed across the room. Peters responded to the charge by reeling into “Spirit of 76” (citing Neil Young and Bob Dylan along the way for good measure), “Rescue Me” and “Blaze of Glory.”

Whew. “Going out in a blaze of glory” is how I remember the Alarm ended their set back in the day, but not tonight. Instead, Peters picked up a head of stream and blasted into “The Stand”, downshifted for “Walk Forever By My Side” and then lifted it back up with the joyful “Rain In The Summertime”. Closing out the night was Slade cover (of all things), “Get Down Get With It” was a quirky and fun way to round out a night that was at times heavy on the sentiment and storytelling. A retrospective that never got caught up in looking back, remaining focused on Marching On, and on. 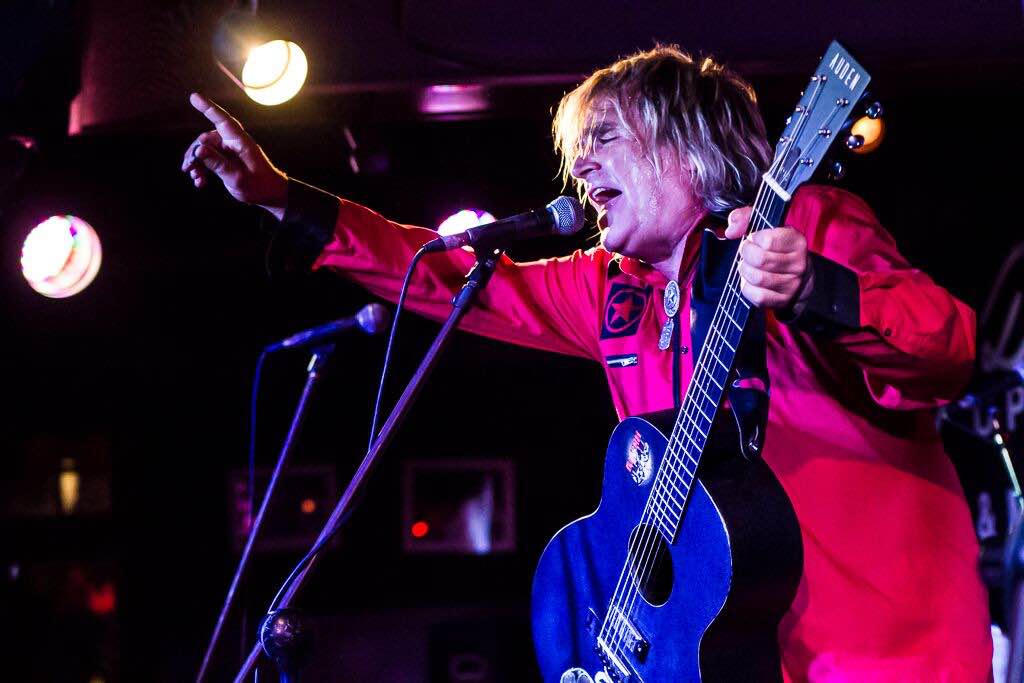