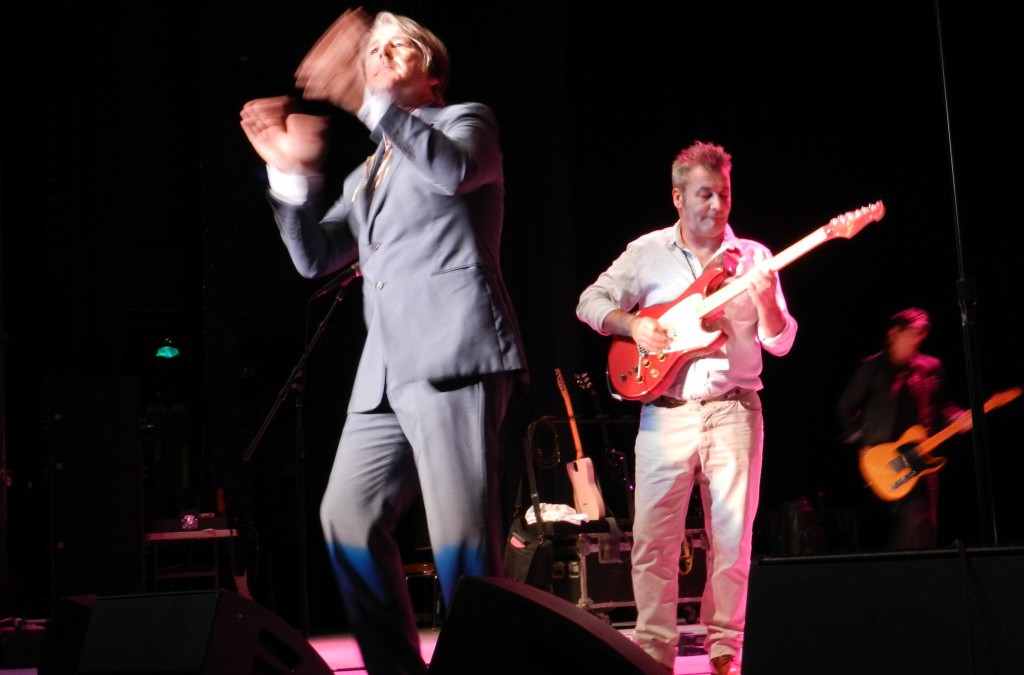 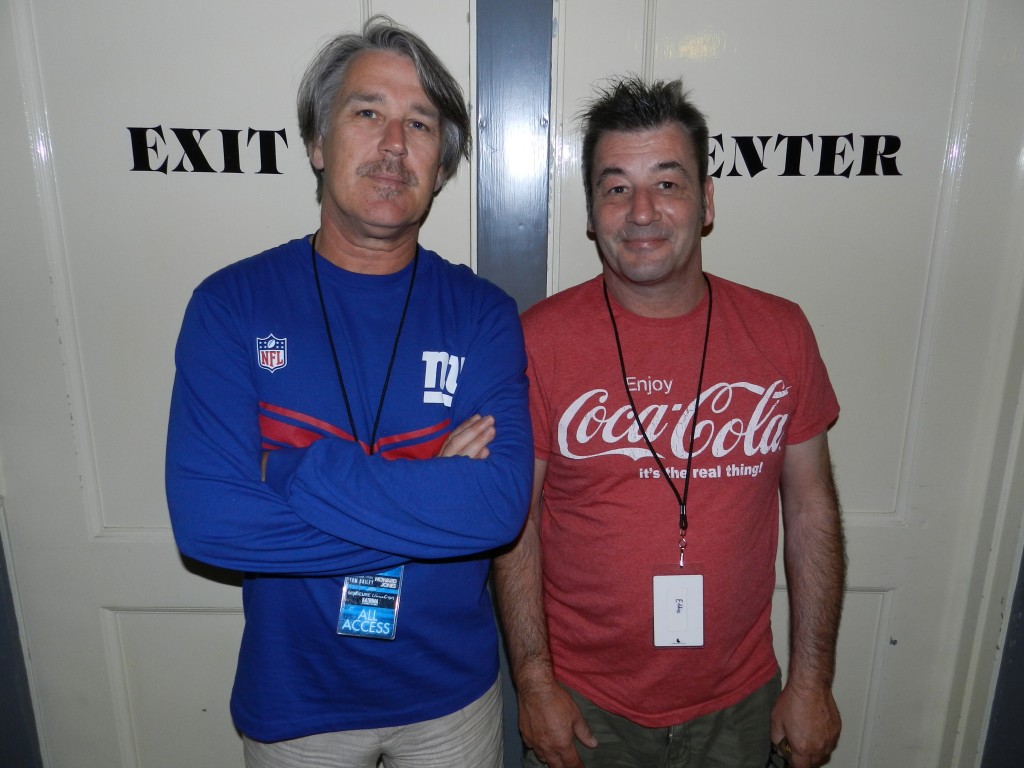 To call China Crisis underrated would be an understatement. The eighties duo of vocalist Gary Daly and guitarist Eddie Lundon are one of music’s best kept secrets.  Then again, to call them an “Eighties Duo” is also a bit of a misnomer because in a time of pre-programmed synth pop, China Crisis created organic solid rock records with songs played on real instruments.   Although they have always been hard to label, and impossible to pin down, they have remained constant in their brilliance during a career that now spans over thirty years.  After a far too long absence from playing live in America, China Crisis returned in 2014.  I caught up with Eddie and Gary backstage on the Retro Futura Tour’s Los Angeles stop at the Greek Theater to discuss the power of their partnership and the joys of NOT being a one hit wonder.

Rocker; Usually the first question I ask many bands on these package tours is “Where Have You Been?”  But truth is you guys never stopped

Eddie: We’ve been doing a hell of a lot of tours every single year. Mainly in the U.K., Europe and the Far East, but we never actually got back here.

Rocker; When did you last tour America?

Eddie: Last year we came over and toured twice just on the East Coast because our ex-agent, who represented us way back in the eighties, Rick Schoor somehow managed to get back in touch with us.

We played the East Coast only twice last year.  Then, he put this tour (Retro Futura) together and invited us on it.

Rocker; What is it like to be back touring in the United States again?

Gary: I always hoped we would get back to America.  I always thought we were good enough to come back. Now we’ve been back three times!  (Laughs)  It’s good though.

Rocker:  Members have changed but the two of you remain together.  What is the secret?

Gary:  We went to school together.  We’ve grown up together.  Our bond is not entirely musical.  We wanted to do this this since we were young.  We wanted to do this to avoid having to get a job.  Having success early on we soon realized this became our job.  It’s not like we think deeply about what we’re doing.  We just go out and play like everybody else.  Don’t fucking think too deeply about it. (Laughs)

Had you not had success early in music on what do you think you would have done for a job?

Gary: We would have done something in music.

Eddie:  We would have carried on doing music but obviously not to this degree.  The thing about longevity is I think we have it because we have a catalog.  It’s very seldom that people get by on the back of one hit single.  I think you do need some sort of portfolio to have a broader following.

Rocker; So is it better to have a catalog of albums people love than to be a “One Hit Wonder?”

Gary:  I think the guy who wrote “Walking On Sunshine” might disagree with you.  (Laughs) He’s retired from just that song.  And he plays in a little local band and that’s what he likes to do.  You can’t really say can you really?  It’s different depending on what happens to everyone. 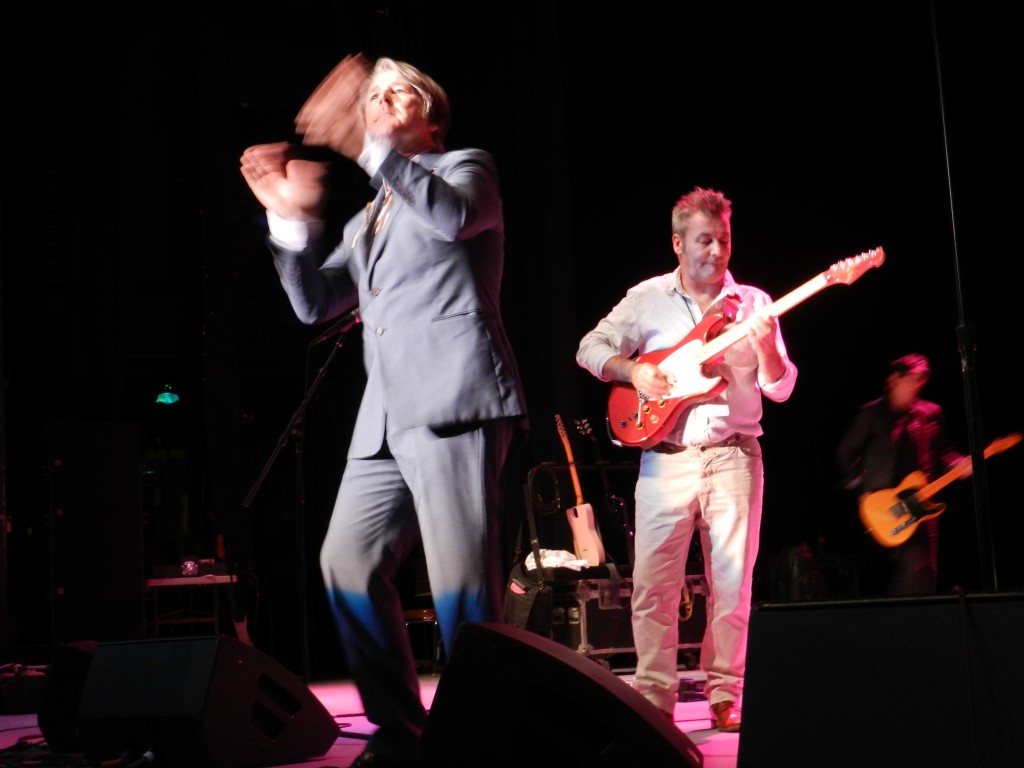 Rocker; Would you trade the career you’ve had for just one big hit?

Rocker; You’ve come close.  Why do you think songs like “King In A Catholic Style (Wake Up),” “Working With Fire and Steel” or “Arizona Sky” didn’t become huge?

Eddie:  I think there are a lot of different reasons.  We’re just one cog in the machine.  The song is a cog.  The band is another cog.  Also is the label.  It depends on how much effort the record company put in.  How music promotion.  How much radio.  You can really go unnoticed in this business if you’re not promoted correctly.  I’ve seen some of the greatest songwriters out there who have never done anything.  You’ve never heard of them.  And you never will.  They say the cream rises to the top.  But does it really?  I’m not quite sure.  People get overlooked.

Gary:  I hear amazing people, friends and people I know, small bands that are beginning in the industry now and they can’t get beyond one album if that.  The business has changed so much.  There is no investment.  There’s no support. People just generally aren’t interested in music across the board the way they once were.   We we were promoted in the eighties there were lots of radio stations and TV programs across the board.  Everybody got to hear them.  Now there is so much more stuff but that doesn’t mean everyone is hearing them.  Its fractured.  It’s just not the same.  We benefited from a different age or music and technology.

Rocker; Is it weird to be called an eighties band?

Gary:  We go out to the Far East and the Philippines a lot.  And with our recent tour of America there has been all this talk about how we’re a New Wave band.

Gary:  Are you serious? New Wave music lasted in Britain and America all of eighteen months or something like that.  Straight after punk rock.   Patti Smith Group became popular and The Talking Head, B52s, and Devo became popular. In Britain it was Elvis Costello, Magazine, Ultravox, The Bunnymen, Squeeze and us.  It was just a short time in music.  And those bands are different.  Not New Wave.    What’s strange to me I’ve met people this tour and they don’t listen to new music. They just like and listen to the eighties.  To me, it’s like, how could you turn off from music?  You could live a hundred lifetimes and not get to hear everything that there is out there.

Rocker; I always stay away from people who only own greatest hits CDs.   Is there any competition between the bands here on the Retro Futura tour?

Eddie: There is a sense of camaraderie.  Certainly no competition.  Everyone has had huge success in their own way.

Gary: We know where we are on the bill.  Tom (Bailey) is headlining.  Howard (Jones) is next.  Then it’s Midge (Ure.) Then us and Katrina.  There is really no competition.  You’d be an idiot to compete with the natural order of things. That’s not the point of it really. The point is to go out, play your songs and enjoy it as much as you possibly can.  That and to try and ID the people who come specifically to support us.  Hope everyone else enjoys it.  But make sure those fans are happy because they have waited for it.  It’s been over twenty seven years since we last played this theater.  There will be people out there saying, “Are they still okay?”

Eddie:  “Are these the guys I saw with Santana?”

Rocker; Is playing a short set easier or harder?

Eddie:  We were given a list of songs to play at the beginning of the tour.  We wanted to drop two or three of them and bring other songs in.  It’s maddening.  There are just to many to choose from.  People like different things. Do we want to do just the hits?  Or some album tracks?

Rocker: What was it like working with Walter Becker on your album “Flaunt The Imperfection?”

Eddie: He was certainly fantastic to work with.  He was very musical.  He liked our songs, which was important to us.  His recording.  He adds that quality of timelessness where the album doesn’t sound dated today.  I think “Flaunt” is still a good sounding record.  Working with him was great.

Rocker: You mention that “Timeless Sound” and while a lot of albums and songs recorded in the eighties sound like the eighties, dated, but yours do not.  Why?

Eddie: A lot of it was focusing on the right things.  Focusing on the melody.  Focusing on the structure and instrumentation.  If you listen to “Dare” by the Human League, the songs are good, but the sound is dated based on the technology of that time.  It’s bizarre.  But we always used natural instruments: guitars, keys, strings, brass mixed with synthesizers doesn’t sound as dated.  Because you have those natural sounding elements. We’ve done that from day one.  Used flutes, acoustic guitars and kept it natural.

Rocker: Do you have a favorite CD and song in your catalog?

Eddie: I know that Gary’s is the first album.  But mine would be a mixture.  Almost like a greatest hits.  (Laughs)  But not just singles and hits.  A mix of album tracks.  I do love “Flaunt” and “Fire and Steel” a lot.

Rocker: Word is there is a new China Crisis album?  When is it out?  Where can we get it?

Gary:  It is called “Autumn In The Neighborhood” and we will be finishing the mixing in late October. It was initially funded by Pledge Music.  It’s a bit like Kickstarter.  And the fans have paid for it.

Eddie:  You have to honor the Pledge thing first because they have paid for it.   When you honor the obligation of delivering the album to Pledge and the people who funded it they hand it back to you and say. “Here you go.  It’s yours.  You can do what you please.”  So we can manufacture it and sell it at gigs.  Sign to an indie label, or several different indie labels around the world, or a major, and it’s not like that.  You can do what you wish!  It’s great.  It’s gonna be out there so please check it out.