A wise woman once asked “who’s the talk of the town?” – our answer : Mr. Bob Dubrow.  The Boston scene stalwart, Kimchee Records big cheese, and former host of WMBR’s live local music show “Pipeline!” is the fellow behind the most fantastic rock and roll birthday party this town has ever seen! Namely Pipeline!’s 25th Anniversary spectacular – 13 shows with nearly to 80 reunited Boston-area bands performing at 5 venues over 5 weekends from September 12 to October 12.

We went to the source to hear more about how these shows came together. 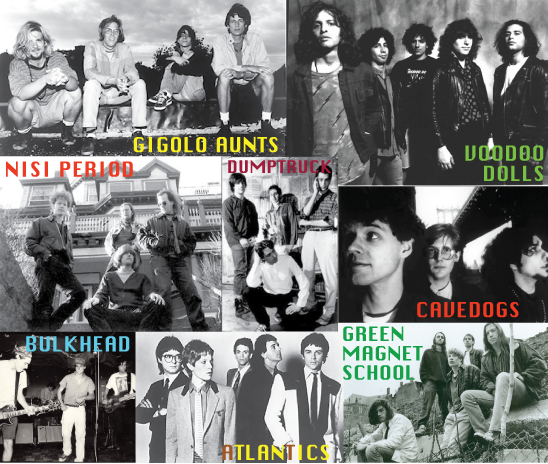 Rocker: Can you tell us a bit about Pipeline?  What it is and how the idea came up to do these shows to celebrate its anniversary?


Bob: Pipeline! is a weekly 2-hour live local music show on WMBR-FM (MIT’s student-run community radio station) The show first broadcast in March of 1989 with The Zulus at its helm. It primarily features bands from the metro Boston area,but does extend itself to acts from other states in New England. Following the live set, the band is interviewed. The first hour of the show features recorded music from a vast array of regional bands. The focus? The rock!  During the first four years of its life it had four different hosts, two of them being show founders Andy Hong and Ted Young (with Ron Spangler and Nancy T being the following two). From 1993-2003 I took over, and from ’03 to the current day the host has been Jeff Breeze.

Jeff called me at the end of March and said he wanted to do a 25th anniversary show and would like my help. I told him the 10th birthday show on 1999 had been a very successful sold-out show at the Middle East downstairs with The Volcano Suns, Moving Targets, Yukki Gipe of Bullet LaVolta doing a set of LaVolta songs with the Targets as backup, The Voodoo Dolls, Busted Statues, and The Titanics. All had reunited for the event. He gave me the go-ahead to try to repeat that success…so I kind of ran further down the road with it than even I expected.

Rocker: Were there certain acts you had an idea to get up front and what has it become?

Bob: I just figured I’d start contacting the bands I loved, who happened to (in my opinion) be beloved by many: The Cavedogs, Gigolo Aunts, The Dambuilders, Nat Freedberg for his killer bands (Flies, Titanics, Satanics, Clamdiggers, Upper Crust), and many more. I figured once i got a core group of stellar acts many others would want to join in. That presumption proved to be correct.

Rocker: How many venues and how many nights will this event last?

Bob: There are presently five venues and 13 nights of shows over five consecutive weekends from Sept. 12 – Oct. 12. I am working on a 14th night at a sixth venue that may well happen a few days after Oct. 12.

Rocker: Have you ever attempted booking an event this size before?

Bob: Yes, I do this every couple of months. Why not? I’m 57 and no one will hire me. Gotta stay busy.

Er…..the real answer is “Are you kidding?”

Bob: These are the bands I think I most regret could not play, not to put a damper on things: The Zulus or their precursor Human Sexual Response (Rich Gilbert is just too busy playing in Nashville), Helium (Mary Timony is touring with her new band, Ex-Hex around this time), Christmas (if Yo La Tengo keeps asking them to do it and they say no, who am I to ask?), Karate (a member lives in Belgium), La Peste (Peter Dayton prefers to leave the past where it is), and The Neighborhoods (David Minehan is playing with The Replacements on every one of my dates…and his wife Judy was wary of playing with her amazing old band Salem 66…a double disappointment from that family!).

But, on the other hand, I was surprised that ’60s psych virtuosos The Freeborne were interested in getting their band back together. It was serendipitous that they had just re-released their only album from 1968 on Arf! Arf! Records, run by record collector and musician Eric Lindgren, who will be playing during the fest with his band Birdsongs of the Mesozoic (which he founded in the ’80s with Roger Miller of Mission of Burma). I’m thrilled that Cardinal is playing in all their orchestral might, having just re-released their gorgeous album from 1994 on Fire Records, Richard Davies was eager to play. Anastasia Screamed, a killer band from the late ’80s and Chick Graning’s band before Scarce, also surprised me by saying yes very early in the curating process. I’m sure there are many others, but The Gizmos also come to mind, they are not a Boston band, but rather formed in Bloomington, Indiana in 1976, with later Boston mainstay Kenne Highland (Hopelessly Obscure, Johnny & the Jumper Cables, the Kenne Highland Clan, etc.). They just played their first reunion shows in the Midwest this summer, and I’m super excited to have them be a part of this. I know Kenne is too.

Rocker: Some people poo-poo “nostalgia” shows, and these reunions definitely fall under that heading.  But what is your feeling about getting these bands back together to play one more time?

Rocker: Do you have a show that you’re most excited to see out of all of them?

Bob: Do you have a child that you are most excited to see out of all of them? I have three kids. The answer to my own question is no.