5 Hours at The Nelsonville Music Festival

Sometimes it sucks being an adult. You try to line up four days to go off to southern Ohio for a big music festival and adult responsibilities and financial constraints collude to whittle your four days of fun in the sun down to just a few hours of making do. That’s pretty much accounts for my abbreviated Nelsonville Music Festival experience for 2013.

I arrived at noon on Saturday June 1st and immediately noticed some changes from my previous trips to Nelsonville. Instead of four stages the show was stripped down to three: Main, Porch and No Fi. The latter two being set up among the old historic cabins that dot the beautiful Hocking College campus (a great place for a music fest.) and there were more vendors this year than before. Mostly craft makers, vintage tee shirt and collectible vinyl peddlers, and print/poster artists. I certainly salute their willingness to brave the elements vending at a four day outdoor show. I gather the original festival was held entirely on one small stage behind a cabin, so things have come a long way! I think Nelsonville has hit that astronomical “goldielocks zone” where its not too big and not too small. Just right to be habitable. 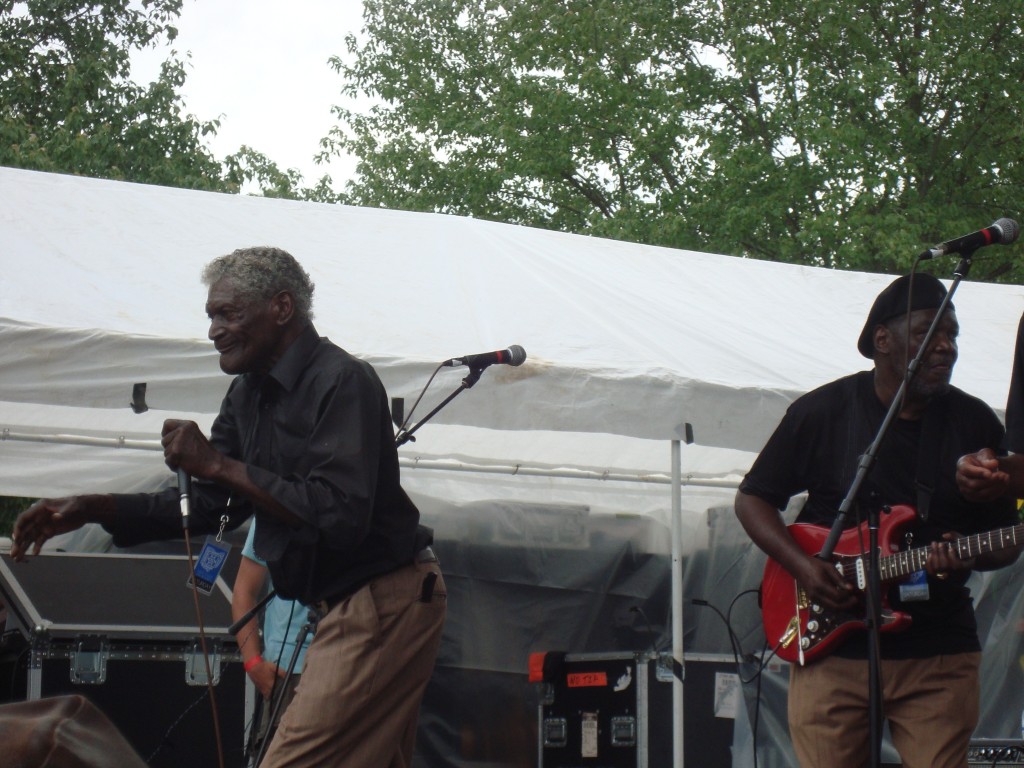 The first act I took in was the Flying Clouds of South Carolina. The ‘Clouds are a remarkable gospel group that has been doing their thing for over fifty years! What makes them so remarkable? Well first off the group features a lot of the original singers five decades down the road, and these guys still bring more energy to their performance than the best bands of today. Secondly, the Flying Clouds are a living breathing missing link between gospel and secular music. Their songs not only show that they are obviously connected to R&B and soul music, but also to genres generally considered separate from the African-American experience, like country and folk. Its all there. You can trace Little Richard, Hank Williams and Bobby Dylan all back to the kind of music that the Flying Clouds sing. The only other performer that could be considered their peer playing at Nelsonville this year was Mavis Staples and I knew that I was going to miss that sure-to-be fantastic show later in the evening so I was happy that the Flying Clouds were playing earlier. (have I cursed my adult responsibilities enough yet? CURSES, I say!)

Next up on my agenda was an act local to Nelsonville, Wheels on Fire from nearby Athens, Ohio. I knew nothing about them, but the program said that they sounded like a 60s garage band and I figured that they were probably the best thing going at this particular time slot. I figured correctly, Wheels on Fire is good. The program was a little off in it’s “60s garage rock” assessment… Their sound was more like the small label power pop revivalists of about a decade ago like the Exploding Hearts or the Fevers. More of a 70s or 80s sound, really. To be fair, I did see in their profile pick that they normally have an organist, as opposed to the stripped down three piece guitar-bass-drum unit that played this show. The addition of an organ would’ve given them more of a 60s vibe. At any rate, I liked these kids and will be looking for a record.

My final stop on my brief tour brought me back to the Main Stage for Jonathan Richman. It didn’t really dawn on me until I was there waiting for Jonathan to take the stage, but the last time I saw him play was in Columbus at the lamentably lost venue, Staches. Which closed in 1996. That puts my last sighting of Jonathan Richman at around 20 years past. I tried to pull up the specific memories of those shows I caught in the 90s, but failed other than remembering that I liked them. (Not Jonathan’s fault. The 90s are largely a blur.) No comparisons to be drawn, I just got up as close to the stage as possible to enjoy the show.

At first, Jonathan, and his drummer Tommy Larkins, seemed to need to settle in. There was some fussing with equipment settings to adjust for the outdoor venue. I wonder how many outdoor shows they play? Not a lot, I’m guessing. While it was a treat to see them, its an act that would be better in a small dark club. But that’s quibbling. Jonathan Richman put on a great set, heavy on material from more recent releases like 2008’s “Because Her Beauty Is Raw and Wild.” The actual songs almost don’t matter. The wonder of the show came from the performance came from Jonathan hamming it up. The 62 year old man performed like a precocious boy genius showing off for friends and family, weaving as many different musical style, narrative jokes and even foreign tongues as possible. He delivered everything with a wink and a smirk that charmed everybody baking in the sun beneath him.

The first was when he briefly put down his guitar and picked up a cowbell. Some lady behind me in the audience, of course, shouted out “more cowbell!” I think that same lady follows me around, because it seems anytime a cowbell is even so much as referenced, I hear her shouting out the same tired old line. STOP IT LADY! It was funny 13 years ago. When Christopher Walken said it. Not now, when you spout it out as a Pavlovian response to seeing a cowbell.

The second was how similar the schtick that made Adam Sandler famous on SNL is to what Jonathan does. Richman approaches it from a far more emotional and intellectual place, but its essentially the same act. Surely that’s not a coincidence, them both being Boston guys and all. I don’t follow Sandler, so I don’t know if he’s ever credited Jonathan Richman as an influence, but I hope he does.

Maybe Saturday Night Live was on my mind because, sadly, like so many of responsible and settled down middle aged types, I was actually home in time to see it that night. And so later, While the free spirits who stayed at Nelsonville enjoyed the musical stylings of Mavis Staples and Wilco, I was in bed fitfully dreaming of publishing deadlines, incomplete scripts, and shipping hassles on top of an impending week of nine to five drudgery.

But at least the five hours of fun I managed to carve out of a busy weekend was a definite spoonful of sugar.

Images in this story by Kate Boelky