Festivals To Watch Out For: Treefort – Boise 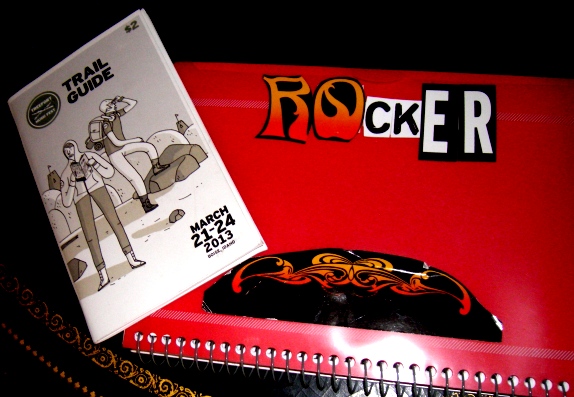 Boise is a little city with a big idea: put on music festival right after SxSW so that some of the bands making their way home have another place to stop and play. Also use said festival as a vehicle to showcase local bands. The result is the Treefort Music festival, which took over the city of trees for second year in a row on the weekend of March 21-24.

At first glance it all seems too ambitious: 270 bands, plus movies and panel discussions, tacked on. Are there really enough people interested to justify all that?

On the first day, the nervous excitement abounded. It looked like there might be more volunteers than attendees at the box office, where concertgoers picked up the glossy wristband that granted them all access to clubs throughout the city for the 4-day event. Then the people started to show. Clutching the well-designed and useful Treefort Trail Map, folks unfamiliar with the city got their bearings and headed out into the throngs of locals. As a non-fan of most music festivals, with their too-short sets, too many people, too expensive beers and too few porta-potties, I had my own trepidations. Over years of attending huge festivals– highlights include being serenaded with “Califonia Girls” by a posse of drunk British bikers at Monsters of Rock at Donnington Castle and getting high with an off-duty cop watching John Lee Hooker and Billy Bragg at the Guinness Fleadh Festival—I felt wearied by the options presented and worried about the crowds—would there be too many or too few people?—before the day even began.

The devil is in the details at events like these, and the details worked. After being soundly annoyed by the aggressive omnipresence of Treefort in the local press and social media worlds, I found the subtle touches of the real-world details to be refreshingly, well, real. The banners that hung quietly in the corner of the stage, the Trail Guide, the fine graphics that dotted the landscape and the smooth-runnings at all the venues—no announcer, no cheering for ourselves, no insider back-slapping—made it feel like just a night out at the club, with a shit-ton of options of other places to be.

The key is in the choices. My press pass decision: go straight to the metal showcase, get beers, tip well and stay (words to live by, those).With the headliner Earth promised at the best bar in town, I headed to Neurolux to plant myself for the evening. The hopping could begin the next day.

Living in Boise, we have the great benefit of having one of the truly great guitarists living in our midst and playing regularly: Brett Netson of Caustic Resin and Built to Spill. Whenever you have the chance to see him, go. We passed on seeing the debut of a dear friend’s son’s band and two of our best friend’s bands playing at other venues to see Brett Netson and Snakes, who we just saw 1 ½ weeks ago. It was worth it. It is always worth it to see Brett Netson. He has a way with the guitar that is all his own, using effects pedals and a whammy bar the size of a letter opener (god, does anyone remember those?) to transport you waaay past heavy psychedelia while grounded in the real world. There was one effect where his guitar sounded like water running over rocks, I swear it’s like that. Although the crowds ebb and flow in this setting of many choices, as Netson put it, “This is where all the heavy, sensitive people are.” After a long pause and maybe some crowd grumblings he adds, “There’s no shame in that.” Indeed.

Next best thing: Wolveserpent, a duo whose utterly unique, magisterial drone just keeps getting better. They compose and execute pieces that create their own force field. Leading the charge is Brittany McConnell, a woman whose towering presence started their set playing a bone-white electric violin. That sound was looped and replayed, distorted, effected throughout the first of two long songs that they played. After violin duties, McConnell brings the sticks to the drum heads as her partner, Blake Green, adds guitars and vocals, also manipulated beyond conscious recognition. The image of Brittany with her arm raised high, paused, ready to descend is an image of undistilled power. We are lucky she has a kind heart, or she could destroy us all.

Headliners Earth had never played in Boise before. They were joined onstage, in lieu of their cellist, by Green of Wolveserpent on bass and Netson on guitar. The local flavor worked like a charm as Dylan Carlson led, guitar, through a set list worth the wait. Drummer Adrienne Davies’ absolute might and timing advance the charge, hold it back, and maintain a rhythm nearly motionless through time. They may have been a tad too heavy for most, but if you love Earth, this was the place to be.

Elsewhere in the festival, reports from reliable sources were all positive from other venues across the city, each and every night. The positive vibe throughout the city was one of surprise and pride that it all worked.

The next day was for wandering. The main stage had all of the failings of an outdoor festival, which is why I hot-footed it outta there after two songs of one band. Instead I headed to The Alefort, where regional breweries served up their finest in customized taster glasses, had its own mini-festival vibe, with raucous music that drove us all to drink (in a good way).

This day’s highlight was to be the El Korah Shrine, a venue that houses the goings-on of the ancient Eastern-themed Shriners, directly across the street from Boise’s independent record store, The Record Exchange. The building itself is awesome, and a throwback to shows in the 70s and 80s when no one had a place to play the types of music that filled Treefort, so it stood as a good reminder of all that has been accomplished in the world of alternative music leading up to this. The Shriners themselves welcomed concert-goers with open arms, letting patrons drink in the downstairs bar, selling drink tokens, and being readily available with helpful directions and kind smiles. You passed by fez-donned photos of Potentates past to get to the Ballroom, where a glorious neon El Korah logo hung above the stage. An added a bonus and a topic of conversation among nearly every woman I spoke with was the lounge in the ladies bathroom. All cream carpet and fake flowers, it was truly a respite from the outside (and modern) world. I had the nearly uncontrollable urge to shoplift make-up and make use of those fabulous mirrors.

The music on the ballroom stage was capped off, every night, by local indy-pop heroes Built to Spill, who had a hand in choosing the line ups for Friday through Sunday. We caught the evil-Schroeder antics of Quasi one night, but had to mosey on down the road to the Evil Wine Showcase at the Red Room Bar, which featured the inimitable Andy D, the self-proclaimed offspring of Grandmaster Flash and Peaches, whose Levi-vest over bare chest, mustachioed, steps-in-the-side hairdo rapping and dancing would make the grumpiest person alive crack up. He sold clip-on rat tails after the show, to boot. 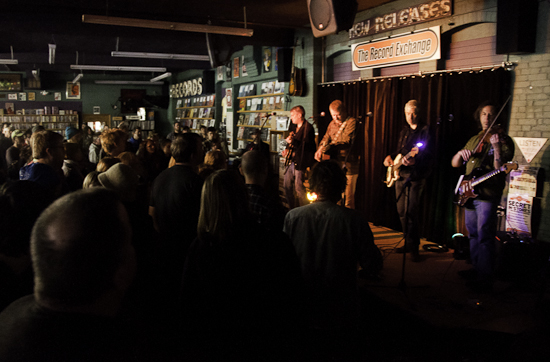 The last night of the festival was an epic night at El Korah, as Doug Martsch from Built to Spill joined the Hand onstage to play 4 songs from their shared former band, Treepeople. This meant a lot to folks from Boise who grew up with that band and the mood was ecstatic. Camper van Beethoven played for second time that day, following an in-store acoustic performance at the Record Exchange with a fully electrified set of songs new and old. Who would have thought that “Take the Skinheads Bowling” would still be a sing-along in 2013? But it is. I can’t get enough Camper Van: they played at my freshman orientation at UC Santa Cruz in 1987—Slugfest—and I have loved them since. They always seem to enjoy what they do and bring you right along with them. For their final set of the weekend, Built to Spill played all covers, which included flawless versions of work from Blue Oyster Cult, Metallica, the Clash, the Smiths, Captain Beefheart and Caustic Resin. It was a great set, well executed and thoroughly enjoyed.

The same could be said for the whole festival. The city is still aglow: it all worked, and it worked well. This is just what a festival should be but rarely is. We are all better for having been there. 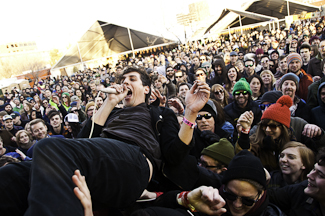