When it comes to icons of modern rock, they come hardly more iconic than The Smiths. Rocketing out of the Manchester, England scene nearly 30 years ago on the back of singles like “What Difference Does It Make?,” “This Charming Man,” and “Heaven Knows I’m Miserable Now,” the band quickly became the drug of choice for a generation of thinking-man’s indie-rock fans. Led by the haunting voice of fresh-faced-yet-unreasonably-world-weary frontman Morrissey, whose cleverer-than-thou lyrics twined round playfully shimmering beds of strum und drang conceived by guitarist Johnny Marr, drummer Mike Joyce and bassist Andy Rourke, The Smiths showed an uncanny knack for musically and lyrically tapping into the darkest ennui and alienation in the hearts of fans the world over. Just 5 years into their reign the band’s time was up, but the perfection of their vision has left generations of music fans forever asking “How Soon Is Now?”

In ironic twist for an ex-member of a band that once musically invoked listeners to “Hang the DJ,” today Smiths bassist Andy Rourke continues his career stateside with his band Jetlag, as well as weekly spinning the soundtrack of his life as a DJ at East Village Radio. We caught up with Andy before a DJ gig at The Pill / Throwed at Cambridge’s Middle East Restaurant to ask about the music that says everything to him about his life. 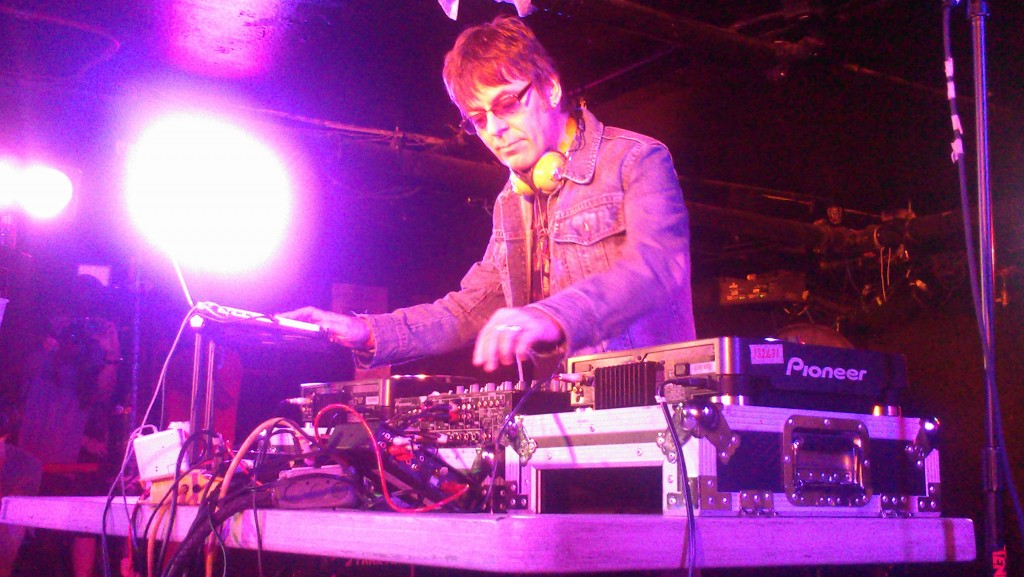 Rocker: When did you become interested in becoming a DJ?

Andy: The DJ thing happened by accident. A friend of mine called DJ Tintin, who’s the on tour DJ for New Order, he had a residency in this club called South in Manchester, and they used to have guests on from time to time, and I used to frequent the club quite a lot. One night – one drunken night – he said, “Next week, bring some CDs, you can DJ,” and I was like, “No, I can’t DJ,” and he said, “Of course you can, just bring your favorite records, it’s easy, I’ll help you.”  So I just brought a box of CDs in and played them and it went down really well, and I really enjoyed myself.  So it got kind of infectious from there. Then somebody else asked me after that, “Oh, why don’t you come DJ at my place,” and then I got an agent, a European agent and an American agent, and it just kind of exploded. I’m certainly not a DJ, I’m a musician.  DJing is just something that I do for fun, and I hope people enjoy it. I don’t take myself seriously at all, I don’t have any DJing skills as such. I do have good taste in music, I think, but we’ll see tonight!

Rocker: I saw the stuff you’re playing on your radio show – what would you call it, stuff you’ve always been a fan of or stuff you’re discovering now?

Andy: I’d say 90 percent of it is stuff that I grew up listening to as a kid and stuff that I love, and I want to expose it to maybe some young people who haven’t heard some of these great records, and the trouble I’ve had since I made the move over to America is that there are so many radio channels, so many new bands, it’s hard to keep up with what’s going on, so I just retreat into my turtle shell and my safety zone and play stuff that I know and love. I know I need to push myself a little more.  I’m sure there are some great new bands out there, I just need to find them.

Rocker: Tonight you’re going to be playing for a lot of kids. Is that the usual turnout? What people come see you?

Andy: I don’t know, because it depends on who’s DJing with me, how I’ve been promoted. You never can tell. I may be playing to a lot of young kids who probably hate what I play, but we’ll see!

Rocker: You’re going to school them then?

Andy: Yeah, I feel like a teacher, it’s an education for these kids, and I’m playing great music. I believe I have good taste.

Rocker: I see kids do retro nights and make missteps. Do you have a philosophy about what you won’t play?

Rocker: It’s from your heart, then.

Andy: Yeah, I go with my feeling, go with the gut.

Rocker: I see you’re not shy about playing the Smiths in a set.

Andy: I’m a little bit shy, I usually play one or two, because I think it’s kind of expected of me. It’s not like I play a Smiths set when I DJ, I think usually I play one or two maximum over a two-hour period, eight minutes over two hours, I don’t think that’s excessive.

Rocker: Do you feel you have to play it, or do you want to?

Andy: Not that I have to, but if a Smiths fan has paid $15 to come see me DJ, then I I’ll play a Smiths song for them, but also I actually like to hear it loud, through some big speakers, because my apartment, I can’t play the music so loud, so it’s nice to hear it blasting out.

Rocker: You’ve also been doing some remixing work lately. Do you think your experience as a musician gives you a unique spin on remixing?

Andy: Definitely, yeah. You said the word ‘experience,’ and nothing can beat that, if you’ve been doing something for years, then yeah, you have the experience and you know what you’re talking about, you trust your instincts and your ideas, and new bands are looking for help sometimes. What I tend to do with remixes is I rip it apart and start again and tear it all to pieces and usually make it a bit of a dance floor mix of stuff, just something that is club-friendly, and all the bands so far that I’ve remixed have loved it. It’s usually indie bands that approach me, so I give them a club mix and they go, “Oh wow, I didn’t think of that.”

Rocker: And what about your band projects?

Andy: I’m still doing the Jetlag thing, me and my partner, Ole Koretsky. We shot a video on my roof two days ago with 40 people.  It’s a bit like the Beatles on the roof at the Apple studios, their last ever gig. In between that and the Spike Lee film, Do the Right Thing. The hottest day of the year…it was a bit like that. We had all our friends come down and we had fun, it was good. We didn’t have any power on the roof, so we had this boombox, it was $40 just for the batteries and they lasted one hour, so by the time everyone arrived, the boombox died. We had a drummer tapping out a tempo, people clapping hands…it was the best song they’d never heard! I promised them I’d send them all the video when it comes out.

Rocker: Do you know when that will be done?

Andy: I think it’s going to get edited in November, so probably in the new year, probably January. Everything takes forever in this business.

Rocker: Why did you move to the States?

Andy: I was just really uninspired and needed to be myself and get kicked in the ass. I was spending way too much time on the sofa, sleeping 12 hours a day, and life was passing me by. I thought “I could stay here and continue that, or I could make a bold move and wake myself up.”

Rocker: Had you always wanted to live in New York?

Andy: In the Smiths, it was the first place in the USA we ever came to play.  New Year’s Eve, 1983, we played the Danecteria, and we stayed here for a week, and I just fell in love with the place. Back then, it was a little bit more dangerous. We stayed in a hotel called the Iroquois, Morrissey insisted we stay there because James Dean had stayed there once.  It had a bulletproof reception and the slowest elevator in the world. It all turned into a bit of a disaster. Mike, the drummer, got chicken pox after one day, and Morrissey fell off the stage on New Year’s Eve.  It was also one of the coldest days on record, there was snow, I think the wind chill was like minus-40 degrees or something, I felt if I scratched my ear, it was going to fall off. I’d never felt cold like that before, this dry cold. But, I don’t know, somehow I got infected, and I just loved the place. So when I decided to make the move from Manchester to it would either be to L.A. or New York.  I thought I could go to L.A. and try to get a suntan, but I have Irish blood in me, so I don’t tan easily. And I was afraid I’d get lazy in L.A. I thought I’d get a lot more done in New York because I had a lot more connections and knew other musicians. So one day I said, “Fuck it, I’m going!”  Sometimes it’s time to make that change.

Rocker: Do you think your perspectives on music have changed at all, being in New York?

Andy: A little bit, but probably a bit opposite, because I can’t listen to the radio. I do my show at East Village, but all the radio in New York is R&B or boy bands or girl bands or whatever, and unless somebody recommends a new band to me, I find it really hard to find any new music. I think I need to start asking record companies to start sending stuff so I can have a listen. To listen to the radio, it’s so random to try to listen to new stuff.

Everybody’s in a band now, or everybody’s a DJ, it’s so fucking hard to keep up with stuff. I try. Every now and again something brilliant pokes out. Don’t ask me to name anything, though.

Rocker: The Smiths are really important to a lot of people, what is it like to have your songs be the soundtrack to someone else’s life?

Andy: I’m comfortable with it now. It’s a bit strange. I’m always very polite to Smiths fans, my fans, because without them, then we’d be nowhere. I hate it when artists and musicians are dismissive of their fans, they won’t take a picture with them, they won’t talk to them, they just walk right through…I think that’s terrible. I always try and sign stuff, take photos.  Being polite never hurt.  I hate it when people become successful and then complain about it, because they don’t get any privacy. This is what you’ve been wishing for your whole life, people taking photos of you, and when it happens, you go, “Ooh, I don’t like this.” Be careful what you wish for!