Mick Fleetwood: The Art of Rock 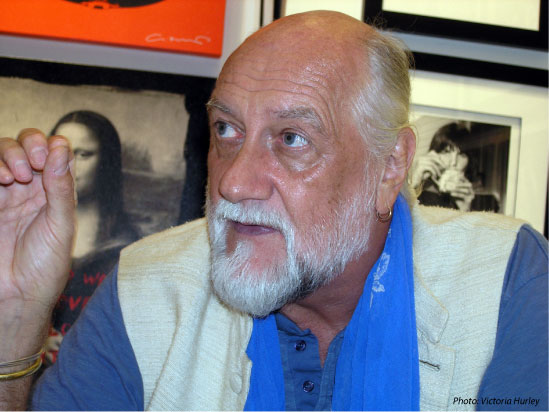 Art galleries are pretentious by nature, and usually full of pale, gaunt hipsters dressed in black with their fingers firmly pressed against their chins downing as much free wine and cheese (which they will throw up later) as possible.  So while an invitation to an art opening is not something I’m quick to RSVP to, this show promised to be something special.  The opening night of the Mouche Gallery in Beverly Hills was to feature a show based around the art of rock and roll luminaries and world famous photographers including Steven Tyler, Ron Wood, Jerry Garcia and legendary drummer Mick Fleetwood.  Hell, Fleetwood himself was scheduled to be there showcasing his digitally altered nature photography.  As the drummer/leader and namesake of the multi-platinum selling hit machine Fleetwood Mac, the man is rock and roll royalty, providing the soundtrack to our lives for nearly 5 decades now.

Apart from music and the occasional acting gig, Fleetwood has turned his longtime love of photography into a passionate (and profitable) business.  In the end I was glad I attend the show because I had a chance to sit down with Fleetwood to discuss art and why passion still drives him to create the finer things in life.

Rocker:  When did you discover that as well as being a musician that you were also an artist?

Mick Fleetwood:  Well I really don’t consider myself and artist.  So that’s the answer to that.

Rocker:  If you’re not an artist then how did these lovely photos come about?

Fleetwood:  I’ve sort of blundered into this.  I’ve always taken photographs, mostly black and white landscape stuff, and I always took care in the creation of them, but it was not stuff I showed off.  Maybe about ten years ago a dear, artist friend of mine, Gerard, who live in Hawaii near me, pursued me to start showing some of my stuff at the gallery where I live.  We had fun doing it.  Then I started using digital manipulation on my photographs to create these (he indicates nearby large brightly colored art prints of roses.)  I was sort of nurtured into the process of doing it. I’ve enjoyed it.  I don’t consider myself a Svengali technician though, it’s all about what I see.  Now I take a lot more time in the post-process.  I didn’t even think about things like what type of paper they’re printed on.  I enjoy it because it’s different from what I normally do.  It sort of puts your nuts on the line.  You’re not just part of an ensemble.   Not that I’m desperately worried about that, but if you’re on stage with eight other musicians and something goes wrong you can always blame someone else.  With this, it’s just me.

Rocker:  How come so many musician and actors are also brilliant artists?

Fleetwood:  Amazing isn’t it?  You imagine someone like a Ronnie Wood, who has gotten very successful at it, or Paul McCartney, Sir Anthony Hopkins,…   It makes sense since they are all people from the arts.  I don’t consider my work to be anywhere as advanced as theirs.

Rocker:  What is the process behind creating the roses?

Fleetwood:  It’s a real exercise in lots of tripods and patience.  You can’t move a thing.  If you do, you just don’t get the real stuff you can blow up that big and get away with it.  So there’s a lot of set up stuff, and working with people that know a lot more about lighting than I do.  I don’t paint, but what we do is put paint on top of my photograph.  I just do what I feel.  It’s a personal touch.  Consequently, because I’m learning to do what I think looks right, I have to scrap a whole load of shit.  I’ll tell Gerard, “I fucked this all up”  (Laughs)  The real art is that someone likes the photograph.

Rocker:  How many do you have to scrap to get one perfect?

Fleetwood:  Not too bad now. Because I don’t do that many.  I’ve gotten better at it now.  I over did it early on and have a slew of mistakes to practice on.

Rocker:  Do you shoot all the time?

Fleetwood:  I went through period of time where I don’t take any photos at all.  Then Gerard will say, “Get at it.”  Then I knuckle down and start shooting.

Rocker:  What are you working on now?

Fleetwood:  I now have another series that I’m going to do when I return home.  In Hawaii, if you know where they are, you find all these old abandoned cars from the 1930s and 40’s.  Not modern cars.  They are abandoned in forests and stuff.  I know where about twenty or thirty of them are now.  So I’m going to do a series of photographs of them.  They have all these incredible flowers growing out of them.  I like the bittersweet feel of it.  In addition I would love to do another series on the crashed planes and other items that were dumped there.  In the wars there was huge usage of the Hawaiian islands for military training.  There is a massive amount of all sorts of crap scattered about on all of those islands.  To me, that would make an interesting series of photographs where you have paradise and peace on these islands which were never touched by the horrors of war.  And yet if you dig into it, you find all the iron mongery they used to train with that was left behind.

Rocker:  Do you have a favorite photograph?

Fleetwood:  My favorite little series of photographs is the one I took before my mother left England, all done in black and white.  The poppy fields all around where my mother lived.  There is a lovely one of a swan on a river I really love.  The series from England is my favorite.