You could fill a warehouse with mediocre books about Hendrix, but Gillian G. Gaar's new tome gets it right 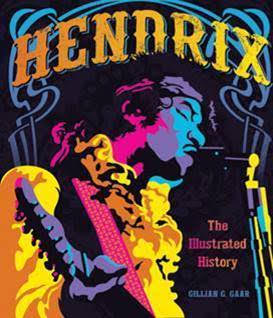 In just under four years, Jimi Hendrix changed the world of popular music forever. Four years. Today, it’s not unusual for bands to spend four years choosing what t-shirt they’re going to wear for the drive to the studio, but in the late sixties, the pace was a lot quicker. It also helped that the whole world seemed to be in a state of flux and nobody embodied that more than Hendrix. He became an icon, unparalleled and untouchable, in just four years.

You could fill a warehouse with books about Hendrix – entire rainforests have been levelled so that authors – from the great and good, to the “paid by the word” hacks – could wax lyrical about him. Not all those books are good. Not all of those books manage to consistently spell his name correctly. Gillian G. Gaar gets it right.

The life of Hendrix could be summarised by almost anyone with the slightest interest in popular culture, so why bother? Why go to all the effort of telling us something we already know? Fortunately for us, Gaar has gone deeper than the average writer and produced something which will appeal to know it all rock trivia bores (this writer gingerly raises his hand…) and people who are just discovering Hendrix’s work. It’s a sumptuous thing – and nicely designed, too. It’s punctuated by some lovely Rick Griffin style graphics and is packed with posters, album and single covers and photographs – many of which I’ve never seen before, and I am a card carrying, no-life, rock trivia bore (see above). The earliest years of his career are well documented with some charming and surprising shots of his tenure with the US Army Band, the King Kasuals, the Isley Brothers and Curtis Knight. This is the bit of his career that is woefully overlooked by the typical Hendrix bio, but a sizeable chunk of “Hendrix: The Illustrated Story” is devoted to this crucially important part of the guitarist’s life.

It’s written with love and care and it’s not uncritical. Not all of Hendrix’s output was stellar and Gaar tells it like it is. She also turns up a lot of new stories and information, like the time that Hendrix gave a talk at his old alma mater, only to leave halfway through, flustered and uncomfortable, saying that he could only communicate with a guitar in his hand. It’s stuff like that, which sets this book apart from the rest.

In spite of being no slouch when it comes to writing herself, Gaar has drafted in some help from some of the big names in rock crit; Harvey Kubernick, Chris Salewicz, Jaan Uheslzki and Dave Hunter all contribute, giving the book the gravitas that many (too many…) other Hendrix books lack. Even a die-hard “read everything, seen everything, heard everything” Hendrix mega-buff will get something from this book. I did. I wasn’t expecting to, but I did.

I have one negative criticism. This is a superb book. Well written, beautifully annotated and superbly illustrated. The cover however promises much less than the content delivers. The jacket has a sort of velveteen texture and the image is a psychedelic, paint by numbers job. It’s the kind of thing that would sit “nicely” next to a black light poster of a Harley Davidson being ridden by a well-endowed (and possibly naked) lady biker. It’s off-puttingly tacky.

“Hendrix: The Illustrated Story” has snuggled up nicely next to “Crosstown Traffic” by Charles Shaar Murray and “Setting The Record Straight” by John McDermott and Eddie Kramer at the top table of Hendrix literature. If you have even a passing interest in the context of pop music, you need this book. ‘Scuse me, while I kiss this librarian.

“Hendrix: The Illustrated Story” by Gillian Gaar can be bought at the Quarto Books Website