Standing in line for my final screening of SXSW’s 2017 film program, it occurred to me that almost every movie I’d seen over the course of nine days matched up with another one in some kind of thematic pairing, as if each film had a doppelganger at the festival. Some twosomes were obvious, some less so, but thinking about the movies in this way helped illuminate the ways they succeed or fail.

21st Century Noir
Neo-noir is a genre that’s persisted far longer than the original film noir cycle that inspired it, and every SXSW seems to bring a new take on the down-and-dirty crime story. It wasn’t hard to spot the contenders this year given the similarity of the titles Small Crimes and Small Town Crime. Both concern disgraced former cops and both feature Robert Forster in a supporting role, but tonally they couldn’t be more different.  Small Crimes stars Game of Thrones’ Nikolaj Coster-Waldau as Joe Denton, released from prison after serving six years for attempted murder. Denton’s attempts to restart his life only end up drawing him back into his bad old ways. Director E.L. Katz’s 2014 debut Cheap Thrills lived up to its name, but despite some tense moments, the follow-up is too contrived and self-serious to pack much of a wallop. That’s not a problem for Small Town Crime, starring John Hawkes as Mike Kendall, an alcoholic ex-cop on his own redemption mission after stumbling on the body of a young woman. This collaboration by writer-directors Eshom and Ian Nelms plays like an adaptation of a lost Elmore Leonard story, mixing its thrills with laughs and populating the supporting cast with such colorful characters, you almost wish it was a pilot for an ongoing series.

Aging Hollywood Icons
Two older movie legends, one real and one (mostly) fictional, are forced to confront their pasts. The Hero stars Sam Elliott as the very Sam Elliot-esque Lee Hayden, a boldly mustachioed former Western star now lending his Texas mesquite pipes to commercial voice-overs and spending most of his time getting stoned with a former co-star (Nick Offerman). When he gets some bad news from his doctor, Hayden goes on a bender with a younger woman (Laura Prepon) and opens his eyes to new possibilities. It’s a story we’ve seen before, but Brett Haley’s laconic direction is perfectly suited to his leading man.  Hayden could be a Hollywood Hills neighbor of David Lynch, who looks back on his childhood and formative years as an artist in the documentary David Lynch: The Art Life. Director Jon Nguyen cultivates a moody, intimate intensity, capturing Lynch at work in his studio (sometimes aided by young daughter Lula), chain-smoking, and offering distinctive memories that illuminate his art (such as a naked woman stumbling across the lawn, later brought to life in Blue Velvet).

Women Tell Their Own Stories 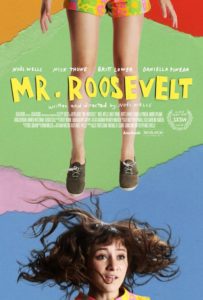 Great roles for actresses are always in short supply, so two up-and-coming talents took matters into their own hands, writing, directing, and starring in their own features. Short-term SNL cast member Noël Wells presented a 35mm print of Mr. Roosevelt at the Paramount Theater and- despite a number of technical hiccups that could have chased the audience – won over the crowd with her charming, very funny tale of a young comedian who returns to Austin from Los Angeles in order to bury her cat. Wells captures the spirit of a slacker Austin, persisting despite the encroachment of condo culture, and brings fresh, surprising humor to what could have been a conventional relationship comedy. Spanish actress Ana Asensio goes much darker in Most Beautiful Island, which transitions from realist immigrant-in-New-York fare to heightened, disturbing night odyssey so seamlessly it becomes all the more suspenseful and unsettling. Both are worth seeking out, but if forced to choose:

Blurring the Documentary Borders
Two documentary hybrids chronicling unlikely efforts to break into the movie business take drastically different creative paths toward the subject. Becoming Bond tells the story of George Lazenby, Australian car mechanic turned male model turned one-time James Bond (in On Her Majesty’s Secret Service). Josh Greenbaum’s film mixes the present-day Lazenby’s talking-head recollections with lightly comic recreations of his misadventures starring Josh Lawson as the man who would be Bond only once before turning down a six-picture offer to continue the role. It’s a trifle, but an amusing one that ends up packing a surprising emotional punch. California Dreams is more like a gut-punch, and not in a good way. Director Mike Ott follows several show-biz wannabes scratching out minimum wage or worse existences in the Southern California desert. They’re close to Hollywood geographically, but realistically these deluded souls might as well be on the moon. Ott intercuts one-on-one interviews with scenes that may be dramatic reenactments or wish-fulfillment scenarios, but does nothing to distinguish reality from fiction. The result comes off as a queasy, mean-spirited piece of exploitation that’s genuinely hard to watch at times.

Rockumentaries Will Never Die
Rock docs have been a staple of SXSW for so long, it seems few stones are left unturned. Two of these year’s entries offer an enlightening contrast between digging deep on a single individual and casting a wider net. Bill Frisell, A Portrait gives us an extended look at universally loved and respected guitarist Frisell, who is perhaps better known as a collaborator (with Bonnie Raitt, John Zorn, Elvis Costello and many others) than for his own extensive discography. Frisell is genial and soft-spoken, and while his talent is not in doubt, he makes for a singularly dull subject, particularly at A Portrait’s punishing length. As I Walk Through the Valley, on the other hand, is a wide-ranging look at the musical scene of the Rio Grande Valley south of San Antonio, Texas. Although it has produced few well-known acts (most notably Freddy Fender), the area has been fertile ground for musical creativity since the ‘60s, when bands like the Cavaliers and the Playboys of Edinburg played teen dances at the McAllen civic center. Since then, acts playing everything from Conjunto to punk to prog have kept the largely unknown but locally beloved scene alive, and the enthusiasm of the fans and musicians comes through loud and clear.

Pick to Click: As I Walk Through the Valley