Sublime vocals, solid retro-style production, a surprising single, and the most annoying Pretenders song ever: Alone has it all.

Remember that time I ordered a double cheeseburger in front of Chrissie Hynde? Of course you don’t because it never happened. I may be a fool but I’m not a damned fool. So when my editor here at Rockerzine World Headquarters™ mused via email if the artist releasing the record should even be called Pretenders since it’s only Chrissie Hynde and some hired guns, my response was, “why the hell not?” I mean, let’s not tempt fate: what happens if the redoubtable Ms. Hynde shows up on our doorstep, fists balled, looking to call us out on our gaffe? After all, Alone isn’t the first time she’s used the Pretenders name and none of the previous players. When one has an instrument as sublime as Hynde has in her voice, one gets an awful lot of leeway from the universe. Martin Chambers*, I love you, man — but Pretenders were, are and always will be C. Hynde, Esq. along with whomever she chooses to surround herself.

Hard to believe it’s been eight years since the last album released under the Pretenders rubric – 2008’s Break Up The Concrete. The Album was a solid show of affection for Americana, with rockabilly and C&W both poking their heads out from the usual chock-a-block rock and roll. After that came 2014’s Stockholm, Hynde’s first titular solo record, a mixed bag, suffering at times from too much production and too little songwriting. Alone largely avoids the former with an honest, well thought-out sound courtesy of producer Dan Auerbach from the Black Keys, who provides a Cook’s Tour of mid-Sixties/early Seventies musical genres, all the while making it sound very much like a natural development of the Pretenders’ style. As for the latter, well, things start to get a little same-y towards the end of the record but let’s concentrate for now on the stellar first half.

Things get off to a fine start with title track, which opens with a chunky guitar/piano riff that screams “The Faces” so loudly one is surprised to hear Hynde’s voice rather than Rod the Mod, and thank goodness too because that fuck-you-if-you-don’t-like-it vocal is like an old friend showing up at your bedside with a chocolate milkshake when you’ve got a sore throat. An ode to urban solitude, the kind that allows her go to a movie or walk through a graveyard if and when she damn well wants to, “Alone” bristles with the kind of attitude that grabs you by the collar just as “Precious” did the first time you heard it, with Hynde’s spoken/sung drawl, reminiscent of late-eighties Lou Reed. (Doubt it? Cue up “Romeo Had Juliette” sometime, then get back to me – postcards only please, usual address.)

“Roadie Man” rides along on a guitar/organ hook that harks right out of 1966, combined with some tasty pedal steel guitar from Nashville session hand, Russ Pahl. Don’t let that scare you, rock purists, let it free you: there’s little in this world closer to aural nirvana than Ms. Hynde’s voice paired with some pedal steel guitar. “Gotta Wait,” perhaps more than any other song here, sounds like classic Pretenders, stomping along like a swamp mist-tery achievement, while “Never Be Together”, cleaner and less raucous, is a nod to early ‘70s soul with Hynde’s molasses-drip vocal and guitar work from twang bar king Duane Eddy. “Chord Lord” does away with anything outside the guitar-bass-drums triumvirate. No keys or pedal steel here; just blues-cum-Zep rock and roll, along with that magnificent voice.

After this, things tail off a bit with skein of five quieter tracks that tend to blend into one another. Taken on their own, songs like “One More Day,” “Blue Eyed Sky” and “The Man That You Are” would be fine, but mashed together at the end of what started as a pretty great album takes a lot of steam out of the musical locomotive. It’s worth noting however that “I Hate Myself” breaks up the monotony with one of the most annoying songs the usually reliable Hynde has ever penned. Is there a color you can’t bear to look upon or a strident TV commercial that make you reach for the remote every time? Here’s the Pretenders’ equivalent.

At first listen, one might be tempted to label album closer “Holy Commotion,” with its electro-steel drum keyboard riff and bouncy beat, a novelty tune but listen again – it’s a novelty that works. Call it a sell-out (I don’t), call it a blatant reach for radio play (hmm, maybe) but either way, it’s catchy as hell, something that pleasantly gets under your skin and, for Pete’s sake, it’s Chrissie-Bleepin’-Hynde! So it’s worth hearing and, compared with much of what the music industry is serving up today, worth savoring. Just like a double cheeseburger.

*As an aside, original Pretenders drummer Martin Chambers apparently WILL be drumming for the upcoming tour, the bulk of which to be spent supporting Stevie Nicks. 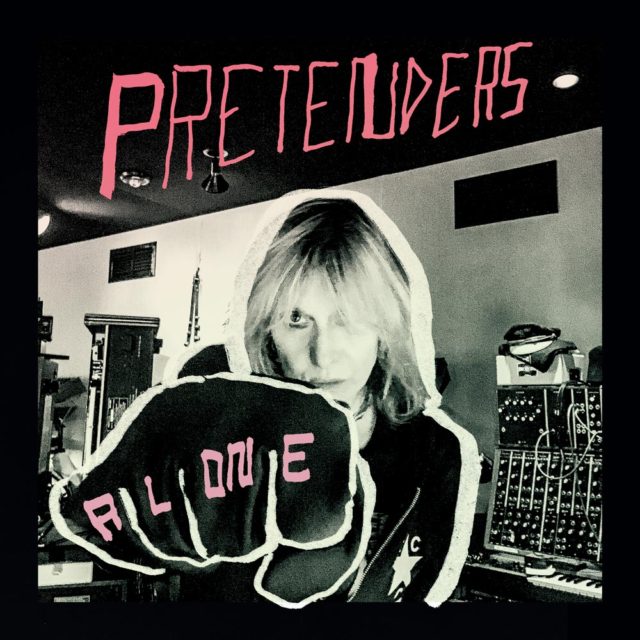