Poster Children: All Grown Up

A tour, a re-release and a reason to fall in love all over again with the Midwest's finest - We talk to founding member & bassist Rose Marshack. 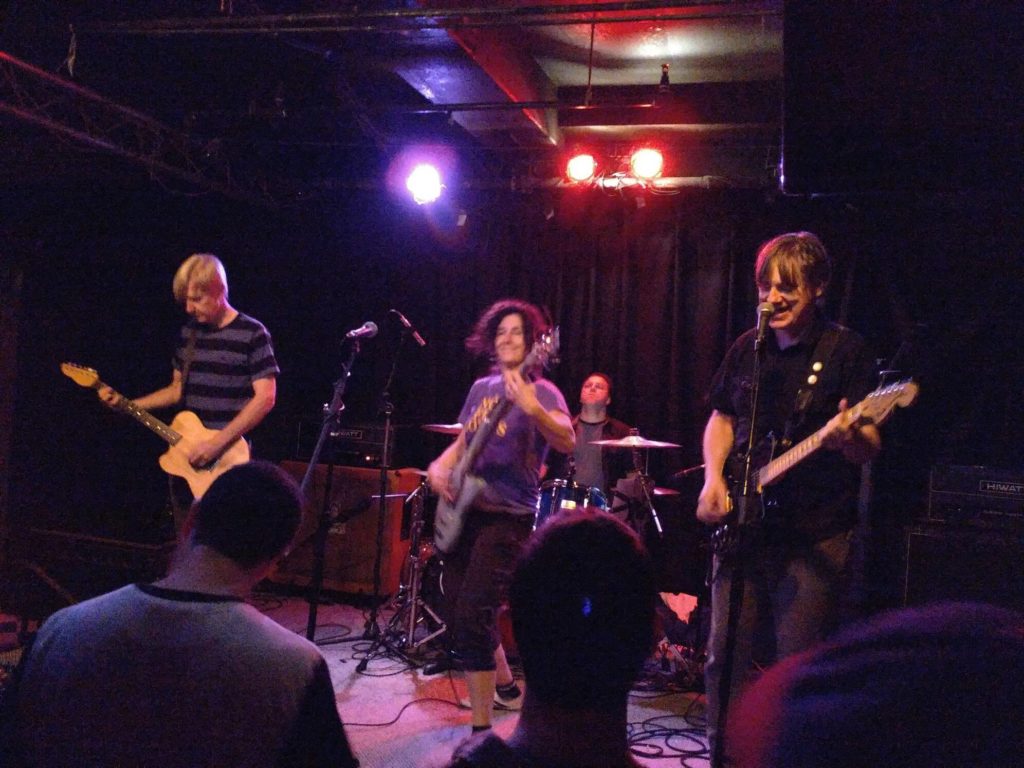 The year is (mumble mumble) and I am a young band manager at CBGBs. I am in NYC for one of those interminable “music showcases” held during the CMJ Festival or New Music Seminar or some such.  As young hopefuls play their hearts out on stage with the dream of getting signed, the problem becomes the music being played over the PA when the bands switch sets is much more interesting than anything we’re seeing live.  “Who is this?” I ask.  “The Poster Children,” someone answers “they’re amazing.” And (mumble mumble) all of the assembled low level indie label reps and PR people agree: Poster Children are super SUPER cool.

In the years that follow buy every release and play them faithfully on my Walkman, then CD Walkman.  I can’t make out many of the lyrics that often only fleetingly peek out from under wild, brutal lashes of steamroller guitars and tottering rhythms, but I sure can holler along with frontman Rick on the lead track to the band’s debut album: “I LEAD A DANGEROUS LIFE!” I howl, and being in my 20s, I truly believe I do.  Poster Children are fierce. Far fiercer than my image of what residents of the bubbly city of Champaign IL should be.  Their songs are crazily elaborate, and powerfully produced, with each musician showing off their chops in every song.  Is it math rock?  Possibly.  But the band certainly don’t forget about the “rock” part of that equation.

The year is 2016 and I am finally getting to see Poster Children live, something that weirdly never happened during their heyday. It is a Sunday night in Boston.  Not exactly the greatest evening to draw fans out, but they are here.   After a brief opening set by Boston’s historic noise rockers Kudgel (who announce they opened for the band the last time they were in town – about 15 years ago) Poster Children ask how many people in the audience were here last time they were in town, and more than half the audience raise their hands.  A show then unfolds that is so exciting it puts bands half their age to shame.  Flying through a tight set of back catalogue hits, tracks from their newly re-released “Daisy Chain Reaction” and a smattering of new tunes it is everything I ever wanted a Poster Children concert to be.  But don’t confuse that statement for my being sated. Like returning to a nasty addiction after a long period of sobriety, I toodle home and spend the next weeks rediscovering those old albums, and finding again that this band leaves me just as fired up as they did years ago.  Even though I NOW LEAD A RESPONSIBLY ADULT BUT SOMEWHAT DANGEROUS BY SOME PEOPLE’S STANDARDS LIFE.

Naturally Rocker was going to have to have a wee interview, so we caught up with Bassist Rose to hear about the band’s recent re-entry to rocking.

Rocker: It’s been about a decade since we last heard from The Poster Children, what has been going on?

Rose: We have been raising children. Turns out it’s really hard. We have also day jobs; Rick and I are professors at Illinois State University in the Arts Technology Program, and we get to develop courses and steer our curriculum. I’m currently teaching a course in Augmented Reality, and another in Computer Programming, and a third in Music Business. Along with teaching, Rick has released a couple of albums under the name “Thoughts Detecting Machines,” Jim has played in a band called “Bully Pulpit” and Matt plays in various cover bands. I spend my extra time practicing and studying Capoeira Angola; the Brazilian martial art.

Rocker: How did the Daisychain Reaction re-release come about?  Why Daisy Chain Reaction now?  Are you or any of the members of the band vinyl enthusiasts yourselves?

Rose: This is the 25th year anniversary of the release of Daisy Chain Reaction, and we feel like it’s an important album for us and perhaps even for the DIY / indie rock canon. During this time, I had just started writing my tour diaries, the internet was born, we had started touring.

I think that just by the fact that we are old, we are vinyl enthusiasts. But now, after so many years of intangible music formats, I think it’s somewhat spectacular to be able to once again HOLD an album, to view the accompanying design without it being mediated by a screen, to perform the actual act of placing the album on the turntable; “doing the work.”

Rocker: What can you tell me about the extra stuff that people get with the Daisy Chain Reaction vinyl and how they all came about?

Rose: Back when Daisy Chain Reaction came out, you heard about the local and global scenes through zines! The typography and images xeroxed had so much personality, the design was very rebellious. It was like we’d taken control of our communication and it happened before we had control of our part of the internet. For this record, we wanted to celebrate that type of control and design again.  We were lucky enough to be able to convince Jon Fine to comment on our album and career, so that essay that he wrote is a big part of the zine.

Rocker: Last night in you were saying that you last played Boston 15 years ago. From a look at your live dates page, it looks like this is the band’s first venture to the coasts in quite a bit. What has led to the current tour and do you think fans are going to get to see more of you in the near future?

Rose: This is our first tour in at least 10 years. Before that we’d played a couple of shows sporadically – it is SO fantastic to be able to travel around again and be on the road, have consecutive shows in a row. I know you could see from our performance we were ecstatic on stage!

This tour is in support of our re-release of Daisy Chain Reaction, so we are playing mostly songs off that record, and some songs from the newer “No More Songs About Sleep And Fire” – and one brand new song from our recordings last summer with Steve Albini. We are hoping that when we release our new album (2017 or 2018) we’ll be able to tour again.

Rocker: Unlike most bands, last night you seemed to be playing songs even faster live than they appear on record.  Am I imagining this?

Rose: No, you’re not imagining things; we do have a habit of playing songs a bit faster than on the records; especially DCR. I think we’re all so excited to be on stage that we are pounding through the songs.

Rocker: You are a true rock goddess on stage. I was wondering if it was always this way, or if the band evolved your stage presence over time?

Rose: Thank you for your kindness. I think the way I move on stage is tied to many, many years of martial arts training. But I am also inspired by my Midwestern sister bass goddesses Heidi Ore (Domestica / 13 Nightmares / Mercy Rule), Candice Belanoff (Walt Mink), and Barb Schilf (House of Large Sizes).

Rocker: In a related thought, I saw Go-Gos the past few years, with my 70-something year old mother, and she noted that she felt frontwoman Belinda Carlisle seemed too intent on “being pretty” to allow herself to rock out as the rest of the band does.  I did think her criticism had some merit.  I wonder if, as a female performer, you’ve ever felt you had to confront this split yourself when it comes to performance and how you appear on stage?

Rose: Obviously not, hahaha. In fact I make sure I lean the opposite way; I try to never wear anything I may deem as “sexy” on stage. I have this amazing Archers of Loaf t-shirt now that shows sweat so strongly that when I saw a picture of myself wearing it, I felt so proud that I had “transcended” any type of visual female aesthetics. There were giant sweat marks all around the armholes, the neck and the tummy; I had my bass raised above my head so this was all glaringly visible. It was awesome and strong, and not glamorous in any way and I was very proud. I want to let my body movements and my bass playing speak and fit in with the rest of the band as a unit; not stand out as some sort of weird decoration.

Rocker: I can see some of the band’s albums are available for download on your website but others aren’t.  Which of your recordings are still in print and which aren’t? Or is the concept of being in print just old school now with downloadable recordings?

Rose: Some of the albums are owned by Warner Brothers, since Sire / Reprise put them out, and so we do not own them. Daisy Chain Reaction was out of print, so we had to find a record label (Lotuspool!) to buy copies from WB. I think when the albums run out, they are out of print unfortunately. Unless there’s a call for them. And for a major label album, unfortunately, there’d have to probably be a call for around 10,000 of them.

Rocker: I also recall there was at least one new song last night, can we expect a new album in the future?

Rose: Yes, we have recorded 6 new songs with Steve Albini; they are more reminiscent of our Daisy Chain Reaction days. I’m very excited about the new songs!

Rocker: I know in the past you authored a tour diary, wondering if anything was worth reporting from the current tour?

Rose: Yes, I have started working on new entries; but I am also working on a printed book form of the diaries. I put them all together and calculated how many pages of writing I have and it adds up to more than 1000 pages! So it has to be organized a bit!

But you can read my tour diaries for the west coast on Innocent Words HERE.

Poster Children music is available at the band’s website HERE!