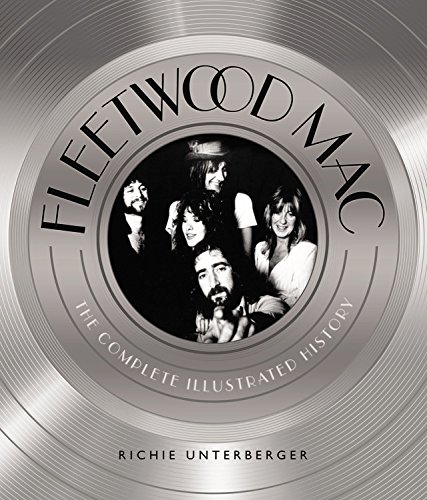 It says a lot about Fleetwood Mac, a band I don’t particularly care for, that by the time it’s most famous/beloved iteration appears in Richie Unterberger’s new hardcover bio, I was happily jumping on YouTube and Spotify to make myself familiar once again with their music. Not that I haven’t had ample opportunity to listen. Over-saturation on 1970’s FM radio combined with heavy rotation in the current liquor store of my choice and being married to a woman who adores Stevie Nicks/hates Lindsay Buckingham, means that I’ve heard plenty of Fleetwood Mac songs over the last 40 years. And nearly all of it against my will.

Or maybe it says more about Richie Unterberger, who does a particularly swell job describing the earliest years of those who would eventually form Fleetwood Mac – drummer Mick Fleetwood, bassist John McVie and, most particularly, Peter Green, the talented yet enigmatic guitarist who would not once but twice replace Eric Clapton in John Mayall’s seminal English blues band, the Bluesbreakers. Unterberger nicely weaves together the fascinating threads of the coalescing London scene with anecdotes featuring Bill Wyman, Rod Stewart and journeyman drummer Aynsley Dunbar. At some point in the early to mid-1960’s, McVie, Fleetwood and Green all became ex-members of the Bluesbreakers, voluntarily or otherwise, did some low-key recording for themselves, added second and third guitarists (Jeremy Spencer & Danny Kirwan) and thus a band was born, albeit a band almost unrecognizable to the legions of fans that would glom onto Fleetwood Mac in the 1970s.

Before those record-breaking, hit-making years, however, the Mac would have some lean times. Some initial success in the UK, built upon heavy club gigging, placed them among the forefront of British blues groups. Their first album, Peter Green’s Fleetwood Mac, scored well with UK critics and fans, reaching #4 but left nary a mark in the US. An interesting side note here is that just a few days before the February 1968 British release of the album, the band recorded a Green composition entitled ‘Black Magic Woman’ that would be rerecorded by Santana three years later to become a US Top 5 smash, one still played (relentlessly, one might say) on classic rock stations today.

A second and third album are released to minor success, a key new player joins the band (Christine McVie née Perfect, drafted from Chicken Shack, yet another London-based blues band) and Fleetwood Mac gets their first taste of US success (‘Oh Well’ reaches Billboard # 55 in March, 1970.) This, of course, is a convenient time for Peter Green, FMac’s heretofore mastermind, to freak out, a thing musicians did with some regularity in the late Sixties/early Seventies. Taken to wearing flowing white robes at gigs when bothering to show up at all, giving away his money and urging his bandmates to do the same, Green becomes another acid casualty of the age and a relative footnote in the history of a band that would soon become one of the biggest groups in the world.

Along the way, one comes across trivial tidbits such as Mick Fleetwood’s playing drums on erstwhile FMac member Bob Welch’s hit single, ‘Sentimental Lady’. Really? There are drums on ‘Sentimental Lady’? Okay, that’s a bit of an unfair shot at a guitarist who was a key component of Fleetwood Mac in the period leading up to the golden age of the band. Five albums over five years ain’t nothing except perhaps in the eyes of the Rock and Roll Hall of Fame who did not find his contribution to Fleetwood Mac’s history worthy enough to enshrine him along with everyone else who may have struck a cowbell for them in the studio.

Also interesting is that Nicks and Buckingham, the catalysts for the great leap into superstardom, weren’t even a glint in Mick Fleetwood’s eye until a studio engineer played for him a demo tape of theirs. A few pages on, the same engineer is quoted comparing Stevie Nicks’ voice to the sound of a goat.

The rest, as they say, is history, the type of which anyone with even a passing knowledge of the band is likely to know. The classic quintet made their album debut in 1975, scoring hits with ‘Monday Morning’, ‘Landslide’ and the hugely influential (well, at least for some 12 to 25 year old females who were looking to refashion themselves with long swirly scarves and top hats) ‘Rhiannon’. Two years later, lightning struck with the epoch-making Rumours, followed the double album Tusk with its audacious – for them – eponymous single. Things start to go awry from there with ego, finances, booze and blow all having their way with the individual members.

Unterberger outlines these years competently and thoroughly but, as with the entire book, it’s entirely based on secondary sources – other books, magazine and newspaper articles, radio and television interviews – and therefore very little in the way of depth or analysis. Yes, Unterberger makes some salient points about the effects of substance abuse or how later albums made without the input of Buckingham or Nicks generally sucked but these are facts his target audience will already know. Ultimately, it’s the lightest of reading except in the matter of size and bulk which is not insubstantial. Only the hardest-core Fleetwood Mac fan would ever be tempted to carry this beyond the living room. Still, someone is going to want it for Christmas, if only to gaze lovingly at the vintage photos of the divine Ms. N and, potentially, to swat Lindsay Buckingham in the head should he ever appear in their wheelhouse. Remember, I live with a Stevie fan so I know.

Fleetwood Mac: The Complete Illustrated History by Richie Unterberger
is published by Quarto Books and can be purchased many places including their website HERE