The Runaways guitarist and heavy metal goddess comes clean on a dirty life. 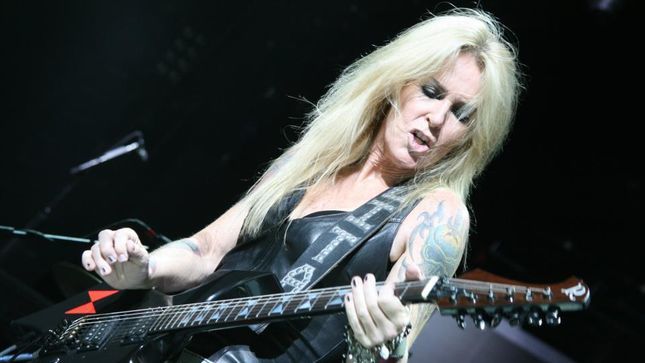 Lita Ford’s Living Like a Runaway is the antithesis of a Beach Boys song. There are no golden-haired honeys waxing up surfboards, catching waves, or having fun all summer long. Rather than soak up the rays like some Pollyanna, The Runaways’ lead guitarist is more likely to hunker down with a bunch of drunks in a dive bar where they can trash their livers, gulp down pills, and spit in each other’s drinks.

Even though Ford was a California girl who grew up in a nice middle class home, she wasn’t exactly the fun-in-the-sun type. Hers was the LA of grit and gloom, teenage toughs, chick fights with bike chains, bars filled with sleazy dudes and the underage girls who love them.  In short, she was born to rock.

A rebel from the get-go, at age 13 she eschewed the lily-white high school of her parents’ choice for a high-security, doghouse education at a Long Beach Polytech. She dug the switchblade aesthetic; cut class, got drunk, got high, and traded guitar licks with other aspiring guitar shredders. This was the real Lita Ford: a tough-ass chick with an axe to grind.

She was all of 15 when she was plucked out the tenth grade by Kim Fowley, a Phil Spector wannabe and Hollywood hedonist with some real claims to fame: he had number one hits with Alley Oop (1960), and Nut Rocker (1962), and is most affectionately known for foisting Papa-Oom-Mow-Mow upon the Western world.

As a human being, Fowley was a complex of mental abrasions. Without his ambition, chutzpah, and connections he would have been just another shmuck on the Vine. But he had a vision, a crude little vision that one day he’d sexualize a bunch of underage girl-musicians, turn them loose on the world, and cash in big time. Although it sounds crazy, that’s exactly what he did.  He found the girls who would comprise The Runaways (not one of them over 16), booked the tours, landed a recording contract, and collected (and kept) the money. He also gave them a few bitter life lessons along the way, most notably the alleged rape of fellow band member Jackie Fuchs (an infamous incident that Ford chose to omit from her memoir).

Although only one-third of the book is dedicated to the Runaways, the stain Fowley left on Ford’s psyche is still palpable. According to Ford, Fowley was demanding, vicious, and unsparingly cruel. He referred to them as “dog shit” and “dog puke” and drilled it into their skulls that without him they were nothing but a bunch of dumb little whores.

Even without the unrelenting abuse, being a Runaway was a tough gig. You had to be tough to deal with the chaos of the road; the drink, the drugs, volatile temperaments, fistfights, screaming matches, depression, suicide attempts, and sexual interludes with predators, psychos, and the occasional well-meaning gentleman. No wonder Ford seems to prize toughness over all human traits. You had to be tough to deal with the rivalries, the unrestrained tension of performing, recording, and living with a bunch of fickle, frightened, and vulnerable teenage girls, most of whom coped by drinking and drugging their troubles away while lying to their parents about keeping up with their schoolwork.

But to her credit, Ford proved tough enough to stand up to the ridicule of the press, the chauvinism of fellow musicians, and the fans who couldn’t believe a girl could play guitar like that! Toughness went into mastering her craft, showing up her supposed betters, and bolstering up her I-don’t-give-a-shit attitude by popping pills or chugging booze. Being born to rock, Ford seems compelled to prove that a chick could be just as crude, and reckless and self-destructive as the next rock star.

These images stick: Lita puking her guts out; Lita constipated for a week and finally finding release in a filthy gas station crapper; Lita waking up soaked in blood after some guy slashed her below the waist during a sleazy hotel tryst; Lita getting punched in the face by one-time rock idol, fiancé, and Black Sabbath guitarist, Tony Iommi. You get the unfortunate impression that, to Ford, everything harsh, soul crushing, and rabid is by definition rock n’ roll.

After the Runaways, Ford found some success in the 1980s scoring a #1 hit and two top tens, including a duet with Ozzie Osborne. But by the 1990s she fell into obscurity. Her entrée into the void coincided with 18 years of conjugal torture with Jim Gillette, lead singer of Nitro. She claims Gillette manipulated her, kept her captive, abused her mentally (and possibly physically), and finally divorced her and took the kids away. A quick search on the web coughed up an article that throws Ford’s victim status into question. It’s called “Our Mother is a Child Abuser,” written by her son, James Gillette.

The last chapters of Living Like a Runaway are spent grieving over her lost children while trying to raise awareness of her pet cause: Parental Alienation. Even with all the emotional loss and devastation, the book pretends to end on a triumphant note: Lita leaves her family, forms a band, resurrects her career, puts out a new album, and, at 57, becomes the self-anointed Queen of Heavy Metal. But this title is unconvincing, a little stupid, and seems more like a consolation prize than anything else.

Before closing the book on the book, Living Like a Runaway does have quieter moments. There are tender meditations on her mother’s life and death as well as Ford’s own experience of motherhood. But what stuck with me were the psychological trappings of its narrative, the distortions, the megalomania, and the desperate plea to be taken seriously as a musician, a woman, a human being. At times it was a frustrating read, but if you’re into Lita Ford, the Runaways, or just like rock and roll, it just might be worth your while. The tone is breezy, she’s seldom boring, and it’s packed with some good, trashy gossip. Even if Ford’s veracity is pretty easy to question, you should never let the truth get in the way of a good story. And she’s got a few good ones to tell.