Robyn tells Rocker why he's no Bob Dylan, why his songs are like an old house, and why having a band is his most expensive hobby 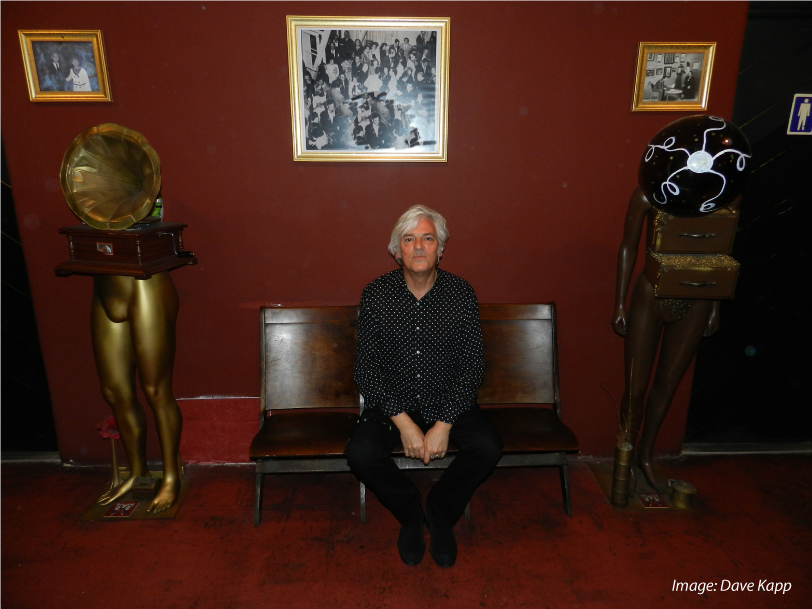 If you are like me (and I know you are) then you discovered the music of Robyn Hitchcock in college, perhaps, by mistake? That’s how I stumbled upon the enigmatic genius. A used copy of “Fegmania!” stared at me from the “Just In” bin at my local record store, and I bought it because the cover looked cool. Once I listened, I was blown away. Of course if you are a bit older like me (and I know you are) you may even have been tuned into the work of his early band The Soft Boys.

Younger folks we deemed “Uncool” in the 1980s discovered him through a string of radio hits that included “Balloon Man” and “Madonna of the Wasps.” Both were great songs, but success meant we cool kids might lose Robyn to the masses. Thankfully, he had no interest in selling out, and like that fickle girlfriend junior year, the Johnny-come-latelies who claimed to love his music “Their whole lives” soon moved on. But like you, I remained a fan, buying everything he put out. Why? Because in a world of bland pop drivel Robyn Hitchcock always delivered quirky quality, right though 2014’s album “The Man Upstairs.”

Robyn took a moment to check in from Nashville, where he is busy at work on a new album (produced by pop wunderkind Brendan Benson), to talk about the music that made him who he is, why his songs are like an old house, and his most expensive hobby.

Rocker: Who do you count as your earliest musical influences?
Robyn: Bob Dylan was first. Having been tipped into music by Dylan, I then listened to The Fabs. I’m still learning from Beatles songs. Hearing the double tracked voices with the similarities between George, Paul and John, yet the differences… Hearing how glorious that was but never overly rich… It wasn’t like The Beach Boys. It wasn’t like a really thick layer cake. They could do it, but they were smart enough to keep it simple. Then Syd Barrett as well, but unlike Dylan he was unstable. Barrett lasted a season and he was gone, Dylan is still with us. He’s a tough old bat, but he is nothing at all now like he was then.

Rocker: If there were no music, what would you be?
Robyn: People like me would have probably became either an author or a poet. Some sort of performer like that.

Rocker: Do you change the set list every night or are there songs you play every night?
Robyn: There are usually three or four that stay from night to night, but when it’s just me I can usually be a bit more adventurous. I’ve written probably a thousand songs, and recorded close to five hundred, but there are probably only sixty that I play regularly. There’s hundreds that I don’t remember the words of the chords of. People send in requests, and increasingly the sets are request-driven. Half of them just ask for the same old stuff, but every so often a good idea will come through. There are some I prefer not to play, but I know that people like to hear them, so I will play some, but not all. Unlike Bob Dylan. Dylan will give you what you want but not in the form that you recognize. Dylan, the paint doesn’t dry on his compositions. After twenty years they just lose their shape. He’s not really interested in what they were. Perhaps they’re never quite finished? The listener has an idea from a record what the finished song is, but the composer doesn’t necessarily think along those lines. McCartney on the other hand is a pleaser and a diplomat gives people exactly what you want. My instinct is to do more of a Dylan than a McCartney (laughs). Bryan Ferry seems to feel similarly these days; I saw him two years ago and it was all Roxy Music with a couple solo hits. It’s interesting that as they get older they actually dip further back into their past.

Rocker:You mention paint not drying, you once said your songs are “Paintings that you listen to.”
Robyn: Yeah. My father was a painter when I was a kid. I came from drawing and painting, and I do draw and paint when I get the chance. I listened to all my favorite records when I was a teenager while drawing and painting, long before I had any mastery of the guitar. Syd Barrett and Captain Beefheart carried on painting long after they had given up music. Even people like Bowie and McCartney and Dylan himself paint. I like a picture. I like the words to create a picture. I’m just talking about the lyrics, I don’t think the music is very visual. The music determines the emotion and mood you feel when you hear the words. The words kind of give you the picture and the music suggests how you might like to feel about it.

Rocker: Painters often say art is never truly finished. Do you feel that way about your songs?
Robyn: Mine are more like a house, like how an older house sort of settles into the ground and the floors ungulate just a bit. It is not how it was when the long dead masons, plasterers and carpenters built that house a hundred-odd years ago. I think my songs settle. Something like “Queen Elvis” which I wrote in 1988, I play it now but its form has changed; but not intentionally. To me a song is ninety-percent finished when it is recorded. Sometimes I will have alternative verses, but I don’t find myself writing “Madonna of the Wasps Part 2” or “The Balloon Man Suite.” They’re all done really, it is more of a question of editing. Sometimes I hear my songs and think, “I should have cut that but out,” but very seldom do I think, “I should have made that longer.” I like visual songs and I write visual songs.

Rocker: What was the oddest part of signing to a major label in the eighties?
Robyn: They had a painting of me on the lot of the old A&M studios, this rather mournful oversized black and white photo of me. If I walked through the grounds everyone saluted (laughs)! What I didn’t get was the whole thing of you have the facility to sell millions of records if you want, but you have to give the label records that will do that. I simply gave them what I did. Every so often it did well as a radio hit, but I had no idea what I did. I didn’t really attempt to exploit myself. The more promotional tricks that we succumbed to the more we compromised ourselves. I made a living, but I didn’t necessarily need to make two livings. I was amazed to be able to come over to America, home of dreams, and go around playing in clubs to people who wanted to see me. But we were encouraged to think things had to grow; the illusion of progress. I wasn’t really about that. I was about writing songs I liked. Having a big label meant I had money to record them well and I had a means of promoting them.

Rocker: Are the covers you play live songs you wish you had written?
Robyn: They are songs I like. My most recent record “The Man Upstairs” has five covers on it and they are all songs I wished I’d written. Some are by friends of mine like Grant Lee Phillips and some by people like The Doors who I have been listening to since I was fifteen. I still managed to get the chords wrong (laughs)!

Rocker: Why was your last CD ( 2014’s “The Man Upstairs”) available on cassette?
Robyn: They’re just part of the current retro iconography. They remind mature hipster of when they were younger and cared about music, and excite the young hipsters who buy record players from Urban Outfitters and find their grandparents’ old ELO cassettes. They buy them, but I don’t know if they actually listen to them.

Rocker: Will The Soft Boys ever do another reunion?
Robyn: No. The last Soft Boys reunion didn’t really feel like a touring-friendly outfit, but I’m glad we did it. We got that done before we were fifty so we still looked relatively youthful. I have a bit of a horror of men past middle age standing up playing songs they did forty years ago. I just think another reunion would be a bit sad. But I’m in touch with a few of them and I wouldn’t rule out a party or a local gig somewhere, but in terms of a professional entity, I would be very surprised if the Soft Boys happened again.

Rocker: Are most of your shows solo acoustic these days?
Robyn: Yes. Having a band is an expensive hobby. The old thing of having band, making record and going on tour would be ludicrously expensive for somebody like me. I still do the occasional band show for an event. I’m extremely lucky to be functioning. I’ve gotten away with it this far. Especially with everybody disappearing this year. At this rate you don’t know who will be around. Are all the talented people getting out first? I don’t know.