I’ve been a Beach Boys fan for a long time and, to be honest, I never gave Carl Wilson’s place in the band much thought. Brian was the fragile genius, Dennis was the crazy one, but who was Carl Wilson?

I’ve been a Beach Boys fan for a long time and, to be honest, I never gave Carl Wilson’s place in the band much thought. Brian was the fragile genius, Dennis was the crazy one, but who was Carl Wilson? All I knew was that he played guitar, sang lead on “Good Vibrations” and God Only Knows, and died of lung cancer at 53. But how did he fit into this broken, messed up and weirdly wholesome trio of brothers? And what role did he play in the Beach Boys? 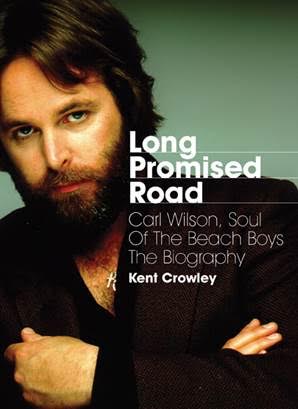 Any discussion of the Beach Boys has to start with their father and first manager, Murry Wilson, a minor songwriter with industry connections, who was so proud of his three sons, he couldn’t help physically or mentally abusing them. He drank (as they used to say), was prone to depression and looked to his sons to fulfill his own musical ambitions. The contrast between the Beach Boys’ wholesome image and their dark and damaged lives make them, in my eyes, the perfect candidate for being America’s Band.

The early part of the book beautifully captures the beach culture in which the Wilsons’ and band members grew up. Crowley delves into California surf culture, and spends a good deal of time on the evolution of surf music as typified by Dick Dale’s guitar heroics (of Lebanese descent, Dale pioneered integrating the Arabic music scales and tremolo-picking style with the electric guitar and a lot of reverb, and preceded Jimi Hendrix with the use of the Fender Stratocaster’s whammy bar).

Until the Beach Boys came along, surf music was guitar-based dance music with a hard edge – and although the Beach Boys scored a local and quasi-national hit with “Surfin’”, (it topped at #74), they could hardly play their instruments – leading die-hard Surf fans to consider the Beach Boys to be lame-ass imitators and wannabes. But after a series of hits including “Surfin’ Safari”, “Surfin’ USA”, and “Surfer Girl” they had transformed the genre from guitar-based instrumentals, to a vocal-oriented pop formula as infectious today as it was in the early 60s.

The book was proving to be an excellent supplement to everything I knew about the Beach Boy, and here are a few fun facts I picked up:

* While still high school kids, they were hired by a promoter to serve as backup band to Lou Rawls and Sam Cooke.

* Thanks to Brian, the Beach Boys were the first major recording artists to write, perform, and produce their own music.

* The day after JFK was assassinated the Beach Boys cancelled their show and that night Brian and Mike Love, both 19 at the time, wrote “The Warmth of the Sun.”

Up to this point, Crowley’s commentary was tolerable, but what did I learn about Carl? I learned that he was chubby, a good guy, that he was a peacekeeper, and that, at 17, Carl became the band’s musical director when Brian stopped touring. And that’s pretty much it.

Consider this: By the time Carl Wilson was 22 years old (1968) he was, essentially, the leader of an oldies band. His instincts as peacemaker and caretaker were no doubt challenged by his bothers; Brian, a genius-cum-nutcase composer, and Dennis a troubled soul whose judgment was so impaired he willingly shared his home with Charles Manson and his clap-ridden family of psycho-chicks and murderers. Although Carl was a conscientious objector during the Vietnam War, the hippies, protestors, and dropouts never considered him or his music cool. He was not even in the prime of his life and, as far as rock and roll relevance goes, Carl Wilson was largely passé.

Unfortunately, the author doesn’t explore how that singular fact defined the man’s private and professional life? Or how he reconciled himself with this conflict? After a lifetime of easy and early success, how did he face failure? And was he affected by his lack of relevance?

All in all, Carl comes across as the kind of guy who is destined to play a supporting role in his own life. His early years are dominated by his father, his adolescence by his oldest brother, and his latter years (he died at 53) by problems with the band, his marriage, his brothers cracking up or dying, and finally with his own bout with drugs and alcohol. Even so, he’s remembered for being a solid family man, a man of intense conscience, and caretaker to the children his brothers and band mates left behind. Given his background, he was a positive force, but being a standup guy doesn’t always make for dynamic reading.

Sadly, Crowley never quite penetrates Wilson’s psyche; never builds an inner life; and never comes close to touching upon his soul (as suggested in the book’s title). It seems that Crowley was so intent on protecting Carl’s place in rock history (or defending the lameness of his and the Beach Boys’ post-1967 output), that the book ends up reading more like a love letter by an adoring fan than an objective account of a potentially interesting man.