Earlier this month, Los Angeles Magazine announced that Rodney's English Disco - LA's seminal glam nightclub founded by KROQ DJ and "Mayor of the Sunset Strip" Rodney Bingenheimer in 1972 - would be brought back to life in a new exhibit by Dennis Hoekstra at LTD Los Angeles.

Earlier this month, Los Angeles Magazine announced that Rodney’s English Disco – LA’s seminal glam nightclub founded by KROQ DJ and “Mayor of the Sunset Strip” Rodney Bingenheimer in 1972 – would be brought back to life in a new exhibit by Dennis Hoekstra at LTD Los Angeles. 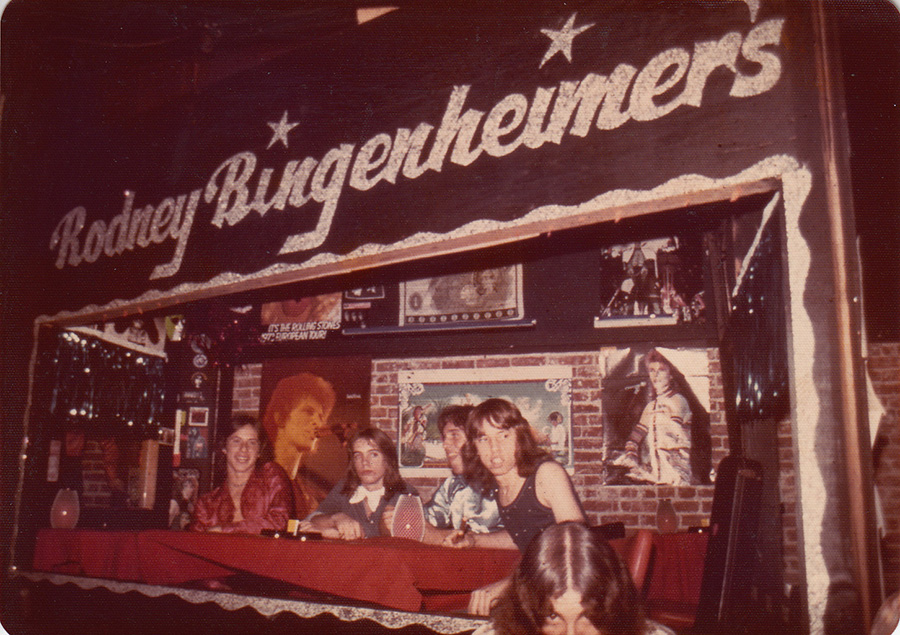 In a response to the exhibit, which will run through July 2016, Runaways founder and lyricist Kari Lee Krome offered this memory of Rodneys on her Facebook page which she has generously allowed us to reprint here.

I still have dreams about Rodney’s, 42 years later.

I first went there when I was 12 years old. The minute I entered the club , heard this strange music I never experienced before, and saw the fabulous creatures gliding about, my life was forever changed. I drove my family nuts, begging and cajoling rides from anyone who was either kind, or aggravated enough to take me, just to shut me up. I searched high and low for the music in my boring suburban town. I stole Rock Scene, Star, and Creem magazines from the liquor stores and mag racks. I cut my hair, I changed my clothes, and my fantasies were now consumed by rock and roll.

This place had such a massive effect on my consciousness that I have the same dream over and over: Rodney’s club is no longer a club, but perfectly recreated as a museum. I see it as I drive by, jam my car into park and run into the club. It’s open but nobody is there. I wander around looking at every poster, every piece of tinsel, inspect all the nooks and crannies. Suddenly Suzi Quatro’s “Devil Gate Drive” roars from the speakers, and I see Rodney in the DJ booth smiling, his hair curling towards his cheeks like an elfin cherub, turning knobs and putting his hand in the air with a thumbs up. I dance around in my memories, the mirrors reflecting my adolescent longings back to me. There’s nobody there but me. No one comes, no one is excited about the music, nobody dresses up, no one cares. It’s a different world now.

I walk outside, and the harsh Los Angeles daylight glares at the people walking around dressed as if they were ready to go camping. I want to crawl back into the safety of the cool dark mirror ball of Rodney’s. I turn back around and it’s gone, fading from my sight like a shimmering mirage. The wind blows a dust cloud of glitter and candy wrappers around.

I wake up, and feel a terrible sadness. It was really that good.

Kari Lee Krome was the co-founder of and a songwriter for The Runaways.  Her latest release is “Kari Krome is Teenage Frankenstein”