The Prefab Messiahs: The Resurrection Is Now

Is it just a coincidence that one time Wormtown’s finest, The Prefab Messiahs, are releasing their first album of new material in about 30 years just in time for Easter 2015? It can’t be, can it?

Yet the new album “Keep Your Stupid Dreams Alive” is a bunny-basket full of very groovy eggs. A tambourine slapping, guitar rattling, cheer-along toe-tapper sure to please those who had their appetite for the band re-whetted by the band’s 2013 compilation “Devolver.”

We talked to the chocolate rabbits in charge: Xerox and Trip to hear more about the band’s resurrection and future miracles they have up their sleeves.

Rocker: I was hoping you could give us a background on the Prefab Messiahs, because I know you started quite a long time ago.

Trip: We started at Clark University in Worcester in the fall of 1981. Doc and I were in our second year. Xerox had just gotten back from his junior year abroad in England and reconnected with his friend Egg Al (Nidle). They put up signs around campus reading “talentless guitarist and drummer seeking bassist and lead guitarist to form post-new wave pop pseudo-psychedelic band.” Doc and I had been rubbing shoulders with art weirdos and experimental musicians during our freshman year, so we were up for something of that description.

Xerox: Yes, that’s basically it. I wanted to start a band even though I could only play two different bar chords and owned a guitar that couldn’t be tuned. Some sort of thing with some sort of anti-80s cultural message mixed with some self-depreciating nostalgia for (then) lost 60s jangly garage pop mixed with Ramones-y snarling new wave. Whatever actually came out when we played was more or less accidental given our level of experience and resources. We went through some rapid development phases, losing that original member… Egg Al was a clever wordsmith and originally supposed to be the lead singer until it became clear he (A) had no interest in it and (B) could never sing the same lyric or melody twice. That was sort of our Syd Barrett Pink Floyd phase. By default I became the lead singer and as a cartoonist, basically the songwriter. But The Prefabs was always very much a creative collective. We carried on, fell into the Wormtown scene, hung around the local community radio station, ran through a vast series of drummers. We managed to be outsiders with both the college crowd and the townies (which were pretty antagonistic worlds.) 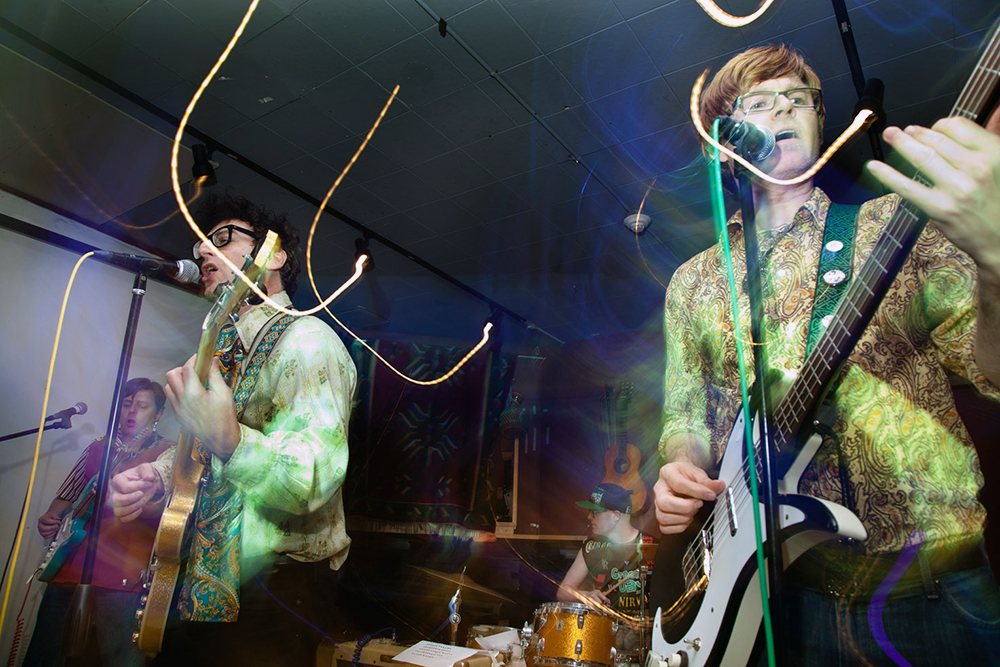 Rocker: Did you consider the band broken up or on hiatus?

Xerox: We broke up. I’d gotten out of college by then, already stayed in Worcester for half a year to keep the band going (and because I had absolutely no clue what else to do.) I think there was a general sense of frustration at not knowing how move forward, a lack of support… being stuck. Mike and I ended up in Boston and had a short-lived band called The New Improved that played a few gigs around 1985 but without Kris it didn’t really jell. By then we were all pretty much in Boston but all moved on to different stuff. The Prefabs seemed like another life, even though it was only a few years past.

Rocker: How did the band end up re-forming?  Or do you even consider yourselves reformed?

Trip: We broke up in early 1983, and did one-off reunion shows in 1998, 2003, and 2008. After doing a 30th anniversary mini-tour in 2012, we decided that we’d had such a great time that we needed to record some brand-new tracks. I guess I consider us “reunited” as of that point, even though we’re split between Boston, NY and Memphis.

Xerox:  Strange to say I think we all reached a point (musically at least) where we sort of realized that we had nothing better to do with ourselves than The Prefab Messiahs. The Prefab era was a really formative, intense period for all of us and in retrospect it really was sort of what we wanted to do all along. I’d began wondering what Prefab music might sound like in the modern era and there seemed to be some interesting answers so I started sending demos to Kris and Mike to see what would happen.

Rocker: How did the recordings for Burger come about?  Did you find them or did they find you?

Trip: The new record is a co-release between them and (Boston-based) KLYAM Records. I’m not sure which of these happened first… at some point Burger emailed me about (outsider psych legend) Bobb Trimble — whom I help manage — saying “We love Bobb!!”… so I worked with them to put out an album of Bobb’s first-ever NYC show. I also told them “You might also like this ’80s garage-psych-pop project I was in.” Around the same time MMOSS was touring in California, and told Burger about us. At any rate, Burger ended up putting out our ’80s anthology ‘Devolver’ in 2013, which set the stage for them to put out the all-new stuff.

Trip: The old recordings were done in many different ways…mostly live to cheap cassette decks, although ‘Devolver’ included two songs from a “real” studio (“The 16th Track” and “Desperately Happy”), and one from a low-budget home studio (“Don’t Go to the Party”). So, the new tracks were made pretty differently — all recorded the same week with Doug Tuttle and Jesse Gallagher in Jesse’s project studio Nightime Sunshine. However, all the basic tracks were recorded on reel-to-reel tape — and Doug and Jesse had lots of interesting ideas on capturing and processing those (and the overdubs).

Xerox: I’d been home-recording songs since after the Prefabs and for some reason (mainly because I really liked remembering how I felt when I was in the band) a few years ago started thinking about a kind of “The Prefab Messiahs Today” type project. Meanwhile Kris had been slowly massaging interest in the band back to life with the “Devolver” re-release. So we ‘suddenly’ found ourselves more and more in touch and thinking about the band. Logistically we couldn’t get together and jam out new material… but that was never really how most of our old songs developed anyway… usually there was a basic song structure and lyrics and if that sparked any in-band interest we would work it up into something ‘final’… each part interpreted and played by each member. So by providing song demos, that process became virtual… out of maybe 20 potential tracks I worked up… and by the time the band physically reunited to rehearse and record, the songs really evolved and became owned by the Prefabs. We definitely didn’t want to record anything new that didn’t seem to capture the original vibe… which, weirdly, was like never forgetting how to ride a bike. We just slipped right back into it. The new songs and the old songs, though separated by 30 years (and a lot of experience) mesh together as part of the same vibe… which was the whole point.

Rocker: Many of our readers will probably remember Xeth’s 90’s cartoon Queer Duck, what has been going on in the world of cartoons for you since then?

Xerox: I’ve been involved in animation since the late 90s. After I moved to NYC I was lucky (for once) and got a big boost being part of the first dot-com animation boom, posting original cartoons like BULBO and PAPU and then being able to help develop and direct projects like the Queer Duck webseries and feature (animated in my old apartment on the Lower East Side) for Showtime. That was written and created by a guy who is one of the top writers on The Simpsons. And I got a taste of working at other relatively high levels in that world (the movie Ice Age.) But of course, just like in the music biz, you don’t really have a lot of control over what happens to your projects or exactly how your career develops, especially if your goal is basically to never work in a cubicle taking orders. So my animation career has some odd parallels with my experience in The Prefab Messiahs: Flurries of success and excitement followed by mind-bending obscurity. But, you know, “Keep Your Stupid Dreams Alive”… maybe years from now the animation no one is paying attention to now will be more appreciated.

FYI… my favorite recent project is an original series I’ve been messing with called RANSACK RABBIT… I do all the writing, music, voice, animation, design… everything:
https://www.youtube.com/user/distractionland

Rocker: I love the video you did for “Weirdoz Everywhere”, in that for me it captures a sort of retro ethic (Ronald McDonald! Reagan! Trip!).  I feel  like I want to see it on Night Flight, and I mean that in a good way.  Where would you want this video to be ideally seen and what would you want someone to take away?

Trip: It’s a great video because after just a few seconds you’re sucked into the stroboscopic quicksand of it. It was just posted (March 11) to BRGR TV, Burger’s YouTube channel that has over 9800 subscribers. That’s a great start, I’d say. Xerox can talk about the making of it, but I’d want someone just to be entertained and dizzied by it — with a bit of spittle forming at the edge of their mouth.

Xerox: I’ve actually got 4 videos done for the new album, for Weirdoz, Bobb’s Psychedelic Car, College Radio and Keep Your Stupid Dreams Alive. The idea was to do some atmospheric motion graphics and whatever else I could figure out. KYSDA is the my favorite right now… it has the most real animation… and it’s also the title song and album theme. Kris has some schemes for when and where to release the vids… but eventually they’ll all at least end up on our youtube channel. I hope to do videos for the other songs too… it’s a matter of time.

Rocker: Now that the record is done, what’s next?  More playing out?

Trip: Yeah, definitely — as we can. A few small tours each year, and more recordings. We already have another album in the early planning stages.

Xerox: I think this record was the record we had to do first if we were going to do a new record… but I can imagine what the follow up record would be/would have been… so hopefully we’ll explore that direction soon.

Rocker: In some ways, the title Keep Your Stupid Dreams Alive rings a bell with me when it comes to Rocker and what we’re about, because we are about supporting artists and fans to keep on going.  What does that title mean to you, or to your band?

Trip: The main meaning is just how it sounds, although it’s framed flippantly for that certain Prefab dark-humor flavor. It’s about the realizations you get from re-evaluating what’s important to you, and responding to them even if they seem like they’re going against the grain of societal expectations.

Xerox: All The Prefab Messiahs can offer is this essentially ridiculous experience we’ve had that every other poor sap playing in every other band that doesn’t become a rock star might have. We’re a genuine ‘come back’ band that never ever ‘made it’ in the first place. It’s stupid! But should you not do it? Give up ‘being’ just because a clock is ticking somewhere? It’s really about any creative activity, any attempt at some self-actualization. Life experience tells me you should do it… whatever ‘It’ is… just be aware of how funny you might look in the mirror. 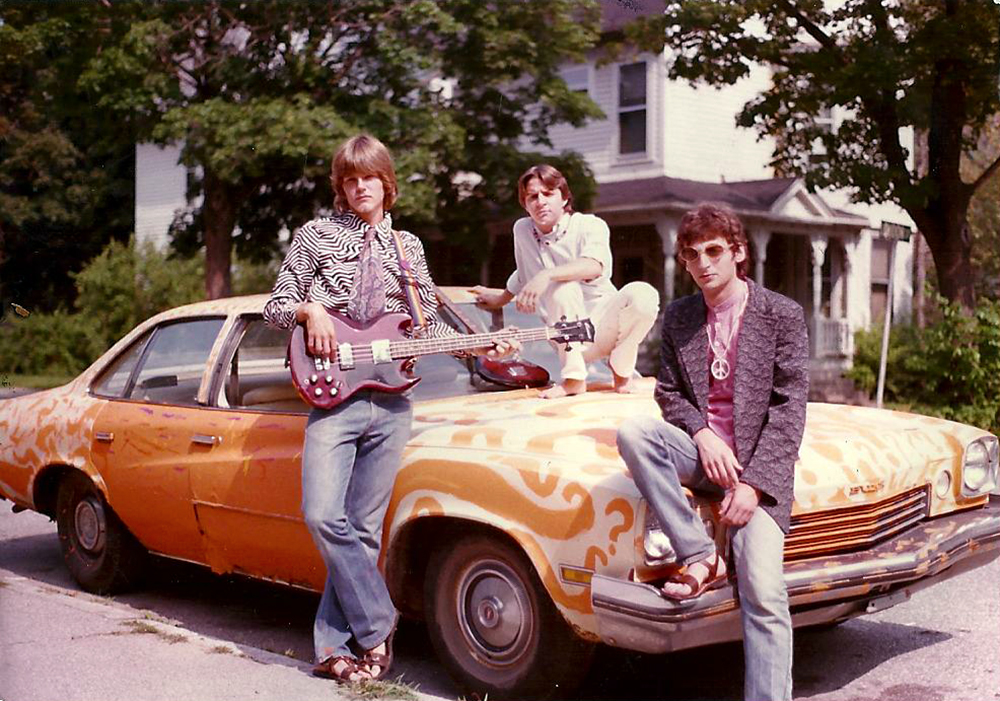