The Five Kinds of Rock Movie You Find at SXSW

With all due respect to the ever-expanding Interactive aspect of SXSW (as well as upstart offshoots like SXSports), it’s the Music and Film Conferences that remain the heart of the 10-day festival.

With all due respect to the ever-expanding Interactive aspect of SXSW (as well as upstart offshoots like SXSports), it’s the Music and Film Conferences that remain the heart of the 10-day festival. The intersection of those two fields has produced some of SXSW’s most memorable moments, like the premiere of Big Star: Nothing Can Hurt Me and its accompanying tribute concert. When you’ve been attending the festival as long as I have, you tend to notice the rock movies falling into certain recurring categories. For the 2015 festival, here are the five kinds of rock movie you find at SXSW:

THE LABOR OF LOVE

In 2010, director Wes Orshoski premiered his rock doc Lemmy at SXSW. Five years later, Orshoski is back with a tribute to the seminal punk band that never quite achieved the heights of the Sex Pistols or the Clash. THE DAMNED: Don’t You Wish That We Were Dead is an admittedly ramshackle DIY affair brimming with the punk spirit as it chronicles the original goth-punks from their 1976 single “New Rose” through their impossibly convoluted lineup changes over the years to the present-day incarnation that includes original guitarist Captain Sensible and vocalist Dave Vanian. Orshoski is an unabashed fan, but doesn’t shy away from the personality conflicts that have created a seemingly permanent rift between the band and founding member Rat Scabies. If anything, the film may have been too honest for Captain Sensible, seeing it for the first time at the SXSW screening. Sensible left the theater briefly during the screening and returned with treats to distract those around him from the “rubbish” onscreen, but was eventually cajoled into climbing onstage and participating in the Q&A. Orshoski’s film is a must-see for Rocker readers, as our intrepid editor-in-chief Erin Amar is seen interviewing the band during a segment shot at the Middle East in Cambridge. [Aw shucks, Thanks Scott! –Ed.]

Veteran producer Bill Pohlad (12 Years a Slave, The Tree of Life) tries his hand at directing with Love & Mercy, which examines the life of the Beach Boys’ Brain Wilson from two alternating perspectives: his ‘60s heyday, when Wilson’s pop ambitions drove him to craft “teenage symphonies to God,” and his ‘80s seclusion, when every aspect of his life was controlled by his psychotherapist, Dr. Eugene Landy. In a decision reminiscent of Todd Haynes’ 2007 Bob Dylan film I’m Not There, Pohlad has cast two different Wilsons: Paul Dano as the younger version and John Cusack as his older self. The ‘60s segments are far more successful, as Dano makes for a credible tortured genius driven to translate the sounds in his head to recordings over the objections of tradition-minded bandmate Mike Love. The ‘80s scenes suffer from severe biopic-itis, as the love of a good woman (Elizabeth Banks) helps Cusack’s Rain Man-like Wilson overcome Paul Giamatti’s cartoonish Landy.

THE CULT ODDITY
Rockumentaries tend to rise and fall with the personalities at their center, which creates a problem for Theory of Obscurity: A Film About the Residents. There are no personalities in the band, or rather, none we know about. The avant-garde group from Shreveport, Louisiana is famous for its secrecy, with its members performing in disguise (most notably with giant eyeballs on their heads). Director Don Hardy, Jr. isn’t much interested in piercing the veil of secrets, although it seems likely that there’s some overlap between the membership of the Cryptic Corporation, the band’s management team, and the Residents themselves. Instead he tries to get at the group’s appeal through interviews with fans like Matt Groening and Penn Jillette, with mixed results. As with fellow fringe acts such as Negativland or Captain Beefheart, the lure of the Residents can be difficult to put into words. It’s clear the fans respond more to the band’s conceptual savvy than its musicianship, as almost all of them are quick to point out the Residents can’t play their instruments. Concert footage from the band’s 40th anniversary tour has its compelling moments, but those not already in the cult are unlikely to be converted.

There’s nothing particularly wrong with Sir Doug and the Genuine Texas Cosmic Groove, the Doug Sahm documentary directed by Joe Nick Patoski, author of biographies like Willie Nelson: An Epic Life and Stevie Ray Vaughan: Caught in the Crossfire. Patoski’s film hits all the highlights, from the early days of the Sir Douglas Quintet, when Sahm and his Texas cohorts briefly passed themselves off as part of the British Invasion, to the heyday of ‘70s Austin as a melting pot of hippies and rednecks, to Sahm’s later days as part of the Tex-Mex supergroup the Texas Tornados. There are vintage performance clips (many from Austin City Limits, natch), interviews with former bandmates like Augie Meyers and Flaco Jiminez, and insights from family members including musicians Shawn and Shandon Sahm. But Sir Doug never takes on the wild persona of its central figure; viewed near the end of a festival brimming over with different flavors of rock doc, it’s all too conventional, as if produced from a PBS template.

Remember record stores? Remember Tower Records in particular? If the answer to both those questions is “No,” you probably won’t have much use for All Things Must Pass. Since you’re reading Rocker, however, the answer is probably “Yes, and I miss them terribly.” Colin Hanks falls into that category, and his documentary is a blast from the past recounting the rise and fall of the venerable music chain. From its humble beginnings in the back of the Sacramento drug store owned by founder Russell Solomon’s father, Tower expanded first to San Francisco, where its warehouse-like flagship store became an epicenter of the Haight-Ashbury scene in the ‘60s. Its Sunset Strip location became a favored hangout for ‘70s musicians, including Elton John, who would drop by every Tuesday morning. By the ‘90s, Tower was a worldwide phenomenon, but its brain trust failed to account for the rise of the internet and the file-sharing revolution, leading to the chain’s eventual bankruptcy. Hanks’ film is enlivened by the personalities of Tower’s long-tenured employees recounting the freewheeling early days of coke-fueled all-nighters doing inventory, and their unlikely transition to corporate leaders thanks to being in the right place at the right time.

Scott Von Doviak is the author of many books on film including “Hick Flicks: The Rise and Fall of Redneck Cinema”, Stephen King Films FAQ: All That’s Left To Know About the King of Horror on Film, and If You Like The Terminator… Here Are Over 200 Movies, TV Shows, and Other Oddities That You Will Love. 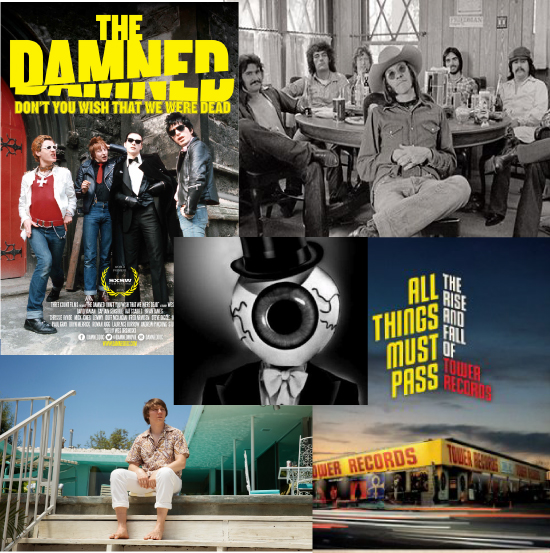