Our favorite former Jellyfish on the re-release of the band’s classic albums, playing with Beck and more!

Is it odd that the first truly great releases of 2015 are actually decades old reissues?  Not if you consider both from the neo-pop nineties band Jellyfish.  To celebrate the fact that “Bellybutton” and “Split Milk” have just been re-released in remastered double CD deluxe editions (Four CDs!  Fifty-one bonus tracks!), West Coast Bureau Chief Keith Valcourt sat down with Roger Manning Jr, the band’s mastermind, to discuss Jellyfish’s short but brilliant life.

And Beck.  We also chatted about Beck. 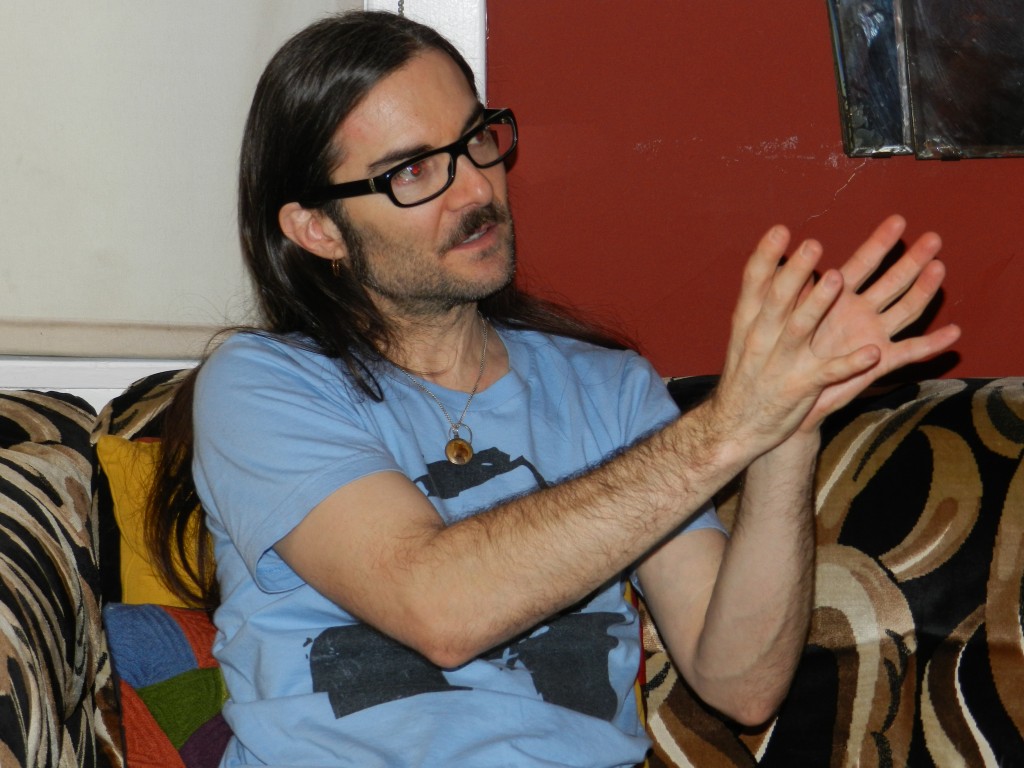 Rocker: When you and Andy Sturmer left the band Beatnik Beach, was the plan to start Jellyfish?
Roger: The sound, style and genres Andy and I were creating together were 180 degrees away from what Beatnik Beach was doing.  We also knew there would be a visual side to the group.  The way we wanted to portray ourselves live and in videos and photos was a natural extension of the music.   Lot of that was being formulated simultaneously.

Rocker: What was the songwriting process between you and Andy?
Roger: Andy and I would come up with chunks of songs and play them for each other.  He would come in and say, “I have this idea.”  He would play, and if I was intrigued – most of the time I was – I would be inspired and immediately go to it.  The song “That is Why” is a perfect example.  Andy had the chorus done.  I came up with the verse and the bridge in his presence and we finished the song in about fifteen minutes.  I’m not bragging, but that is how easy it was when you are inspired that much.  He played the chorus and it was instant.  I thought, “I’m not going to get this out of my head.  I want to help finish this.”  Then he would mumble some lyrics, and we would harmonize the bridge.

The song on “Spilt Milk” called “New Mistake” is another example of where Andy showed up and he had the verse completely done.  I thought, “That’s catchy and solid, but it sounds like it’s gonna go somewhere else.”  I kept coming to this piano-Supertramp-shuffle thing, even though the song was first written on guitar.  It came together right there, a perfect case of a 50/50 collaboration.  Once a song was ninety percent done musically, Andy would run with the lyrics.  He would sometimes consult me on lyrics, but he was much more advanced lyrically than me.  He just had to get into his little cave, into his shell and into his psyche and pull the lyric out.

Rocker: When you went back and listened to the remastered albums did you discover anything new?
Roger: Basically just fine tuning.  As I have matured, learned new things and gained wisdom around production and arrangement there are all kinds of intelligent education comments I could bring to this.
I stand by all of it.  I don’t think any musician would tell you they wouldn’t go back in time and fix things if they could.  Fortunately I don’t think anything is wrecked or ruined, or that we missed the mark.  Lord knows we obsessed and stressed on them the first time around.  That stress lead to Andy and I having our first major personal fall out during the making of our second record “Split Milk.” Part of that was fueled by the stress and expectations we put on ourselves for that record.

I’m thrilled and blown away with the way people are still so enthused about these records and the offshoots and solo CDs that came from them.  A lot of my solo records feature material that didn’t make these two records twenty years ago.  I go through the vault and find a lot of unfinished ideas that were all inspired by this era with my creative partner.  Certainly there are other things that have inspired me since Jellyfish, but at the end of the day, if I’m on a desert island, the core sound and vibe that I want to be listening comes from these more than the other.

Rocker: Do you have a favorite of the two albums?
Roger: For me “Spilt Milk” was the vision of what we set out to do fully realized.  Everything Andy and I would stay up late dreaming and talking and fantasizing about we went for on “Bellybutton,” which I was proud of.  But on “Spilt Milk” we saw all those ideas seen through to fruition.  If I have to choose it’s my preferred album to this date.

Rocker: Any chance of a Jellyfish reunion?
Roger: I don’t see how.  It’s funny, but since we all went our own separate ways I have worked, in some capacity, with every member of Jellyfish except Andy.  Jason and I had a whole separate band with TV Eyes, which I’m terribly proud of.  Will Sharp, who managed Imperial Drag, called me in the mid 2000s, maybe 2004 or 2005, and said he spoke to the Coachella people and they wanted a Jellyfish reunion.  He asked if I wanted him to pursue that.  I said, “Go feel it out.  But I don’t believe there is enough interest from the band members to do it.”  I think he heard through Andy’s lawyer that no amount of money was of interest to him.  Thanks, but no thanks.

One of the things that started to happen on the road near the end of the band was that Andy was not excited about all the attention from the public that he was receiving.  That attention doesn’t always sit well with musicians who enter the pop world; Andy Partridge, Syd Barrett or Brian Wilson all being prime examples.  He was one of those people who was not excited about that part of the business.  I know many people that work with him in film and TV and they always tell me how happy and successful he is.  I reached out to him in 2011 and I felt it was long overdue.  In doing some personal growth I felt I had some amends to make with him that were going to be healing for myself, and for both of us ideally.

After a lot of thought and guidance I reached out to him.  It wasn’t impulsive. I’m very happy I did that and I think Andy was happy I did that as well.  I think he was happy to read what I wrote. He didn’t talk much about it after I did that, he just said, “Thank you very much for this.”  If I had the time I would clone myself and put Imperial Drag and Moog Cookbook together.  I’m so blessed with people wanting to hear more and more, but it’s a juggling act.  Since then we have only had brief email interactions, mostly of a business nature.  I’ve had no desire to say, “Hey man, let’s get the old writing team together!”  because I’m very fulfilled with my current life.  When I do have time between my projects, the things that pay my bills and keep me creatively fulfilled, I enjoy making solo records.

Rocker: Are you are still playing with Beck?
Roger: I continue to work with him, but it is at his discretion.  Sometimes he calls the whole band in.  Other times he says, “I’m gonna make this new album on my laptop.”  When it comes to playing live with him, I really enjoy the touring we do.  There is talk of some summer shows starting in May.  He is in the middle of a new record.

Rocker: Are you involved?
Roger: Not yet.  But if he wants keyboards I’m there.  He could call me this afternoon and say, “I need you for five days next week.”  Or not call me at all.  I’m ready when he does.

Rocker: What else are you up to musically?
Roger: One of the things that started happening last year, which I’m terribly excited about, is arranging orchestrations, string and brass. for pop stuff.  I’ve done it on my own records, but to put yourself out there, hear a stranger’s music and turn it into something is a delicate dance.  How do I complement this song but add my unique contribution to it all in a timely fashion for ex-amount of dollars?  I worked on the Paramore album, The Young The Giant album, and I’m working with Nate Ruess from Fun.  He’s working on a solo record.