If you missed Devo performing their earliest songs on their recent tour, no worries: this new film puts you right in the action.

In 2014, new wave pioneers Devo suffered a terrible loss when guitarist Bob Casale, aka Bob 2, died of a massive heart attack.  Many feared his death would signal the end innovative band’s four decade run.  How could Devo move forward after this tragedy?  The answer was unexpected.  In order to move forward, the band had to look back; all the way back to their earliest formative years in the basements and garages of Akron, Ohio, where they started playing experimental noise driven punk.  They called it Hardcore Devo.  Gerald Casale, the band’s singer, bassist and real life brother to Bob 2 explains, “Before he died, Bob had been talking about us touring and only playing the material we made from 1974 to 1977.  To honor his memory we did just that.”

The Hardcore Devo tour that followed only featured eleven select dates and sold out in seconds.  The good news is the profits went to Bob’s family.  The bad news?  Many of us missed it.  Regrets?  I’ve had a few, and missing the Hardcore Devo tour was among them.  Thankfully, director Keirda Bahruth and her crew were smart enough to film the band’s show at The Fox Theater in Oakland, California, and the result is the brilliant new documentary “HARDCORE DEVO LIVE!” I was lucky enough to be at the West Coast premiere alongside Devo founding members Mark Motherbaugh, Gerry Casale and Bob Mothersbaugh.

HARDCORE DEVO LIVE! is not your run of the mill concert film.  It has an immersive feel with multi-camera angles and clever editing making a real difference.  You really feel you are there, smack dab in the middle of the crowd at the live show, not just watching a movie about a band.  All that’s missing is a sweaty, bloated, mouth breather in an energy dome pogoing next to you.

Songs like “Mechanical Man,” “Jocko Homo,” “Uncontrollable Urge” and the band’s legendary cover of the Rolling Stones’ “Satisfaction” sound better than they ever did on the Devo tapes I had in high school.  Youthful energy in songwriting combined with wisdom and experience of playing together for years proves to be a powerful combination, but certainly credit for the film’s brilliance has to be shared between the band and the film’s director Keirda Bahruth.  After the screening, I caught up with her. 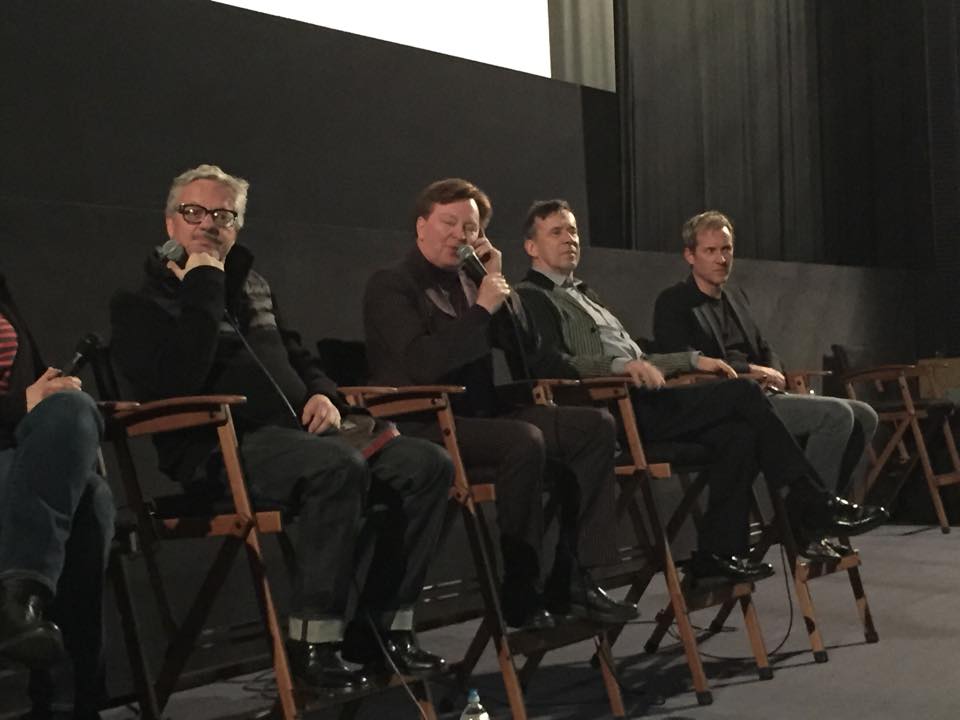 Rocker: Why did you decide to make a film about DEVO?

Bahruth: My company, Shaker Films, was approached by MVD Entertainment to make the film in May 2014, so I can’t take credit for the genesis of the idea.  MVD was one of the distributors on a previous film I directed called “Bob and The Monster,” and we had discussed doing a project together if the right situation ever presented itself, which it eventually did.

Rocker: Were you a fan of the band beforehand?

Bahruth: I was, but I was still unfamiliar with the “Hardcore” demos, so the process of discovering those songs was really fun. The content of those songs are so crude and politically incorrect that it was just shocking and hilarious to me. I fell in love immediately.

Rocker: What was the biggest challenge in shooting the band live?

Bahruth: I had not seen the show before going up to Oakland to film it, so I was watching YouTube videos to get a sense of what I was covering. That made me pretty nervous. I also had several conversations with Jerry Casale and he was incredibly detailed and informative about what to expect. There was a narrative built in to the live show already so making sure all those little subtleties were picked up was important and there was also a lot of ambient lighting in the first half of the show which can be challenging from a cameras standpoint.  Fortunately, DEVO is such a well-oiled machine that what I was expecting was exactly what I got. There were very little surprises, which made my job a bit easier, however, the stage diver during Uncontrollable Urge was a happy surprise.

Rocker: How many cameras did you use to shoot it?

Bahruth: We used a total of 11 cameras.

Rocker: You managed to shoot the film in a way that makes the audience feel like they are at the concert and not watching a film. How did you do that?

Bahruth: I think a big part of that, is that I love music so much and I love filming music. It’s such an incredible high to be participating in some small way to this primitive exchange between musicians and their audience. It’s also important not to get in the way of that exchange. This is their show, it’s their expression, so manipulating that with too many edits can interrupt what they are communicating to their fans, and that is not something I was interested in doing. I wanted my footprint to be light.

Another thing is that it’s important to hold a shot. When we are experiencing live music, our eyes don’t cut up the experience into little edits so I tried to mimic how we watch a concert, or how I watch a concert unfolding in front of me. I wanted to stay as true to that experience as possible. Having a talented editor is also crucial and Rick Ballard is one mean machine. He has such a long history recording music and playing music, so stitching this experience together came very naturally to him. We spent hours watching and marking every little move we loved. That part of the process was really fun for both of us.

Rocker: What impressed you most about the band?

Bahruth: Everything. I was impressed by the songs, the performance, the art, all of it. As someone seeing this stuff for the first time, I was just wide eyed, like a kid riding through a perverse version of “It’s A Small World” for the first time. The absolute bizarreness of “Mechanical Man” into the driving blues of “Auto Modown” to the hilarity of “Baby Talkin’ Bitches” and horror of “Social Fools” and “Oh No.”

The call and answer ritual of “Jocko Homo” got me so riled up that I almost forgot my purpose and was just immersed in the scene. “Are We Not Men?…WE ARE DEVO” with that thumping music behind it was almost transcendent. I realize how hyperbolic that sounds, but it’s actually true. I was lost in it all.

That’s why it was so important that this tour be documented because only 10 lucky cities were witness to this, but now it is there for everyone to experience. I feel very fortunate to be a part of it all.