Jim Peterik: Eye Of The Survivor

You may not know the name Jim Peterik but you know his songs.  First, as lead guitarist and singer of Ides Of March, Jim wrote, sang and played guitar on the rock radio (and car commercial) staple “Vehicle. As the lead guitarist and primary songwriter for Survivor, he wrote the mega hits “High On You,” “The Search Is Over” and “Eye Of The Tiger.”  Along the way he also wrote songs for everyone from 38 Special (“Hold On Loosely”, “”Caught Up In You”” and “Rocking Into The Night”) to the Beach Boys (“That’s Why God Made Radio.”) to the theme to the movie Heavy Metal (Sammy Hagar).

Peterik recently penned an autobiography of his rock and roll life titled: “Eye Of The Tiger.”  I caught up with him in Huntington Beach, California backstage at all-star jam that included members of Ambrosia, Loverboy, Pablo Cruise, Chicago and Toto. We talked about everything from his time in Survivor (including that call from Sylvester Stallone) to the longevity of Ides Of March, to the tragic recent death of Survivor singer Jimi Jamison. 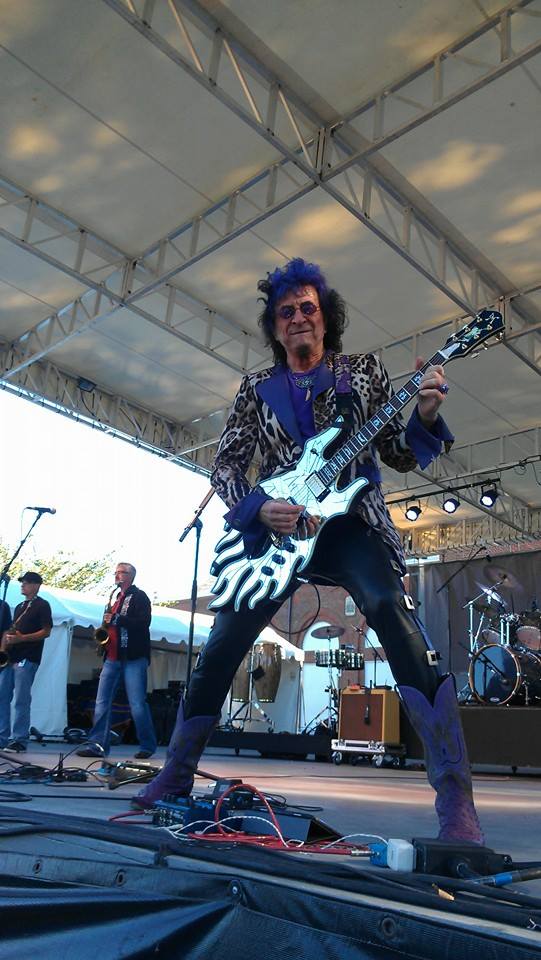 Rocker: What inspired you to write the book now?

Jim: I felt it was the perfect time to really talk about my life and what it was like.  You’re the first person to ask me that question.  I had a lot of stories to tell.  I’m a huge fan of rock autobiographies.  I eat them like candy.  I don’t think there is one I haven’t read.  I admire the ones that have a sense of humor and where the artist comes through.  I don’t like ghost written books.  I wrote every word in the book – I had an advisor who kept me on track, but I wrote every word.  My goal was for my personality to come through.  I wanted my place in the pantheon of rock autobiographies.  I knew I wasn’t as big as Eric Clapton or Keith Richards but I had a story to tell.  The story of a guy from Berwyn Illinois who had a dream and who caught the big brass ring.

Rocker: Did you discover anything that surprised you?

Jim: Yeah, how much anger I had.  Every story, doesn’t need drama, but when it has drama it makes it more real.  I could have sugar coated a lot of things but no.  That’s part of the arc of a life. The ups and downs, getting bullied, and the power struggles in a band.

Rocker: You’re talking about the fights between you and Survivor co-writer Frankie Sullivan?

Jim: With Frankie that dichotomy of the way he was versus the way I am helped define who I am.  As it is with most writing teams there is always one who is the sweetheart to the press.  And one who is the rebel.  Of course I was the guy who wanted to bend over backwards to everyone because I felt so lucky to be where I was.

Rocker: We’ll get into Survivor, but I would like to start where you did with the band Ides of March.  When the band formed you were a teenager.  You were only eighteen when “Vehicle” was a hit.  What was it like to have a national hit as a teenager.  How did you handle that?

Jim: Very well, surprisingly.  The Ides of March were a family and we were very grounded in what we wanted to do, and that was music.  When we were invited to this giant party with Led Zeppelin we were like, “What are they doing?  What is that going up their nose?”  We knew what it was but we weren’t even tempted.  We just wanted to make the music.

Our first tour was in 1966 on the road playing shows with The Almond Joys, who became Allman Brothers. It was mind blowing to be on the road.  We had a top seven record in Chicago with the song “You Wouldn’t Listen,”  a very much a Kinks meets the Hollies wanna be song.   We had two vans that kept breaking down but it was a great time.  I would do it again.

Rocker: Most of these books are full of debauched tales of sex, drugs and rock n roll but you avoided the temptation of the sex and drugs.  Is that the key to your longevity?
Jim: I think so.  I really do.  I always had this built in limiter where I knew my gift was more important than anything else.  We all have a gift.  I’m not saying I’m a genius.  All I knew is I had music and I wanted to protect that.  I didn’t want to get high.  I tried it.  It didn’t work.  If it had worked I would probably kept doing it.  But my creativity didn’t want that.  While guys were partying I would be in my room with an acoustic guitar trying to write the next album.

Rocker: You’re known as a guitarist, but you sang lead in Ides Of March, why not sing lead in Survivor?

Jim: I was the lead guitarist and lead singer in Ides Of March.  Frontman.  The guy that talked to the audience.  And I enjoyed that.  That’s the way I intended it to be with the Jim Peterik Band which became Survivor.  But when we got singer Dave Bickler I realized this really isn’t the Jim Peterik Band anymore.  So we looked for a name.  We went through the usual horrible names, and I picked Survivor.

Rocker: The story in the book about how Sylvester Stallone called you and that led to you writing “Eye Of the Tiger”  How did Stallone know your phone number?

Jim: He got the message from Tony Scotti of Scotti Brothers records.  They were a family, if you know what I mean.  They knew some people who knew some people,…  But it was a great label.  Great guys,  who were so loyal to us.,  Frank Stallone happened by the studio and Tony gave him the Survivor “Premonition” record.  Sylvester heard it and said, “I want that sound.”  He then asked Tony for my number.  That’s how it happened.

Rocker: In Survivor you worked with two singers Dave and Jimi Jamison.  Which was your favorite?

Jim: So different.  I would have never written songs like “Poor Man Son” or “Eye Of The Tiger” for Jimi.  They were suited for Dave’s voice.  Same goes for “The Search Is Over” which was so well suited for Jimi.

Rocker: Why did you part ways with Survivor?

Jim: I got back with them in 1992 when Dave came back.  We were battling Jimi Jamison who was touring with his own version of the band.  In 1993 we played Germany.  Things were going good but then it got gradually more splintered.  By 1996 Frankie drew a line across the stage and said, “Don’t cross that line.”  And I never did again. It just became very torturous to be in that band.  I had enough.

Rocker: Sadly, Jimi Jamison died at the end of summer 2014.  Were you still in touch?

Jim: He became very hard to reach recently. I didn’t know what that was about.  One day, about two weeks before he died, he called me and left me a message.  He didn’t sound good.  He said, “Jimbo give me a call.  I just wanna hear your voice.”  I could tell something was not right.  I called him back and left him a message.  Said, “I miss you.  Let’s get together.”  Next thing you know.  I got the news and I was just floored.

Rocker:  The Ides Of March just marked a 50th anniversary.  How many original members are still in the band?

Rocker: The song “Vehicle” has a life of its own.  Could you ever have imagined something you wrote in your youth would live on?

Jim: Crazy.  You never can know that.  I never thought “Eye of The Tiger” would be around thirty years later.  I thought, “It’s a nice song, and it’s in a movie.  Number one for seven weeks, cool.”  But the longevity astounds me.  I gotta write another one of those! 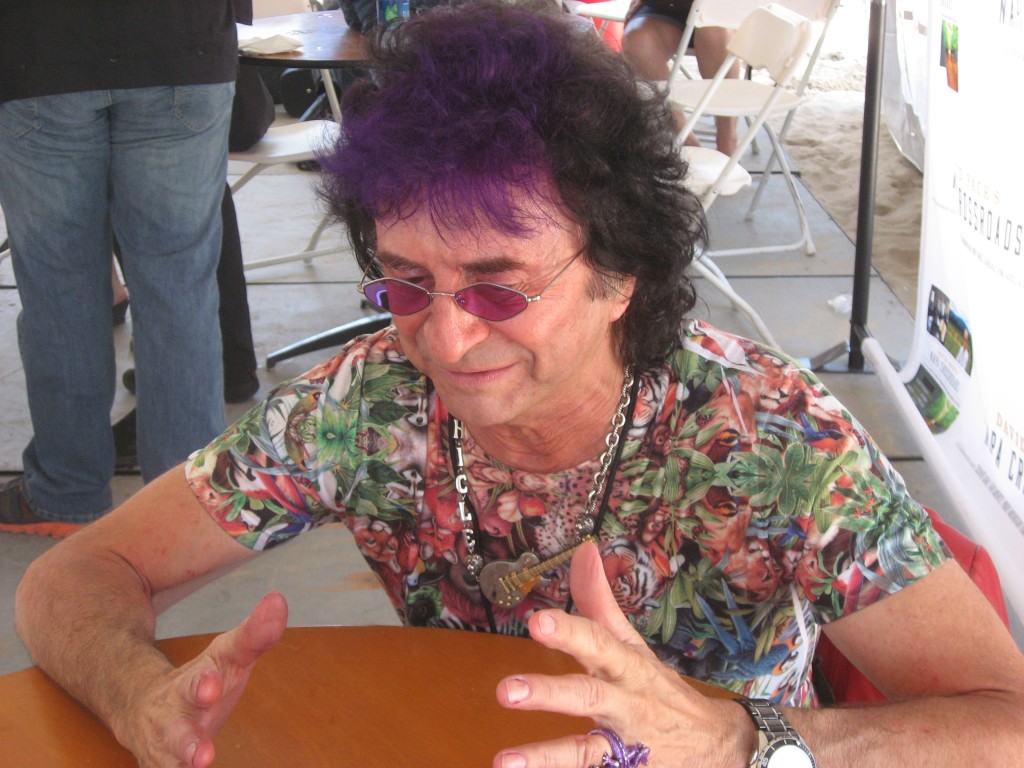