Boise Does it Again: Treefort Music Festival Blooms in 2014

Ignore, for a moment, the horrific politics of Idaho’s legislature in 2014, and focus instead on what the small city (population 212K) really has to offer: a thoughtful, clever, well-planned music festival that has grown, in its third year, into a dynamic vision come to fruition: Treefort has arrived.

Boise Idaho does it again.

Ignore, for a moment, the horrific politics of Idaho’s legislature in 2014, and focus instead on what the small city (population 212K) really has to offer: a thoughtful, clever, well-planned music festival that has grown, in its third year, into a dynamic vision come to fruition: Treefort has arrived.

People may comment on Boise becoming the Next Something: Portland, Williamsburg, SxSW, but that is entirely off base. You see, the folks in Boise that want the life those places offer simply move there: to Portland, to San Francisco, to New York. The ones that stay (or move) here are here because they like Boise the way it is. Maybe they don’t like big cities or traffic or overpopulation; maybe they like things a little bit calmer; maybe they like a smaller community of creative types so that you can really get to be known in a scene. You see, Boiseans and Treefort aren’t trying to be anything other than what they are. It is an admirable trait: be here now.

With more than 350 bands playing in 17 venues around the city—all in walking distance—over 4 days, plus associated events in other arts with a Film Festival, Storyfort, Hackfort and more, this is a brash undertaking for this little outpost of culture.  Yet, as a tree should, at this point in its life, in 2014 Treefort grew at a rapid rate. It got stronger. It branched out. It took its place in the surrounding landscape. And this year, it bloomed.

The number of activities and bands is nearly overwhelming, but the pre-fest access to hearing and reading about bands on the website and the pocket-sized Trail Guide Booklet give you some clues as to where you want to be, when. We like to pick a few bands that anchor the day, then float in between, get recommendations, give new sounds a try.

I found, in the end, that my experiences over the 5 days organized themselves into a theme based on first letters of band names: the overall experience was of Distinctive Meaningful Boogie.
El Dopamine

So. This is how it begins. The night before the festival officially starts, there’s a pre-show, a showcase of the History of Rock in Boise. This is for the folks who were around before it all came to town, who laid the groundwork for what is to come in the days to follow. These were the kids who listened to the music when it wasn’t mainstream: fuck, it wasn’t even called “alternative” yet. They went to shows and started bands and put out records and tapes. Give these folks some credit: none of this would exist without them.

I didn’t go to this particular high school, but no one’s mad at us for being there. We get to see the bands that meant so much to our friends. It’s all well and good and has a fine reunion-y feel until el Dopamine takes the stage and shows you what a band can be.
“Welcome to Old Man Fort,” says frontman John O’Neil as he and his bandmates tune up in style, wearing suits and ties. We know these guys are good musicians: we see them in other bands around town all the time. But put them together as one and they show you how it is done.

You have to admit it: it’s pretty easy, these days, to play punk or metal or folk or write some catchy poppy tunes. There’s a formula that exists. You can play around with it and make it your own, but at a certain point, you will sound like somebody else. Just a little bit; maybe not on purpose, maybe just for the sake of description, but “like” nonetheless.

Not these guys. These guys know something and can execute it precisely. You have to have lyrics that are cutting and smart but that have some heart behind them: it has to mean something. It can’t just be “fuck you.” The way to be masterly is to be able to say, “So, fuck you and here’s why.” I’ve never seen this done any better than these guys did it. It set the bar pretty high for the rest of the fest.

Also tonight: Caustic Resin, a band of myth, with their legendary on-stage infighting. No fists are thrown this time, but the fury that goes between guitarist Brett Netson and bassist Tom Dirtweed is frenetic; songs are stopped, heads are shaken, words are yelled, but when they hit their mark they are transcendent. The crowd is there with them, willing them, and the rewards are enough. Netson’s son Trevor plays second guitar on a few songs: a nice generational touch. 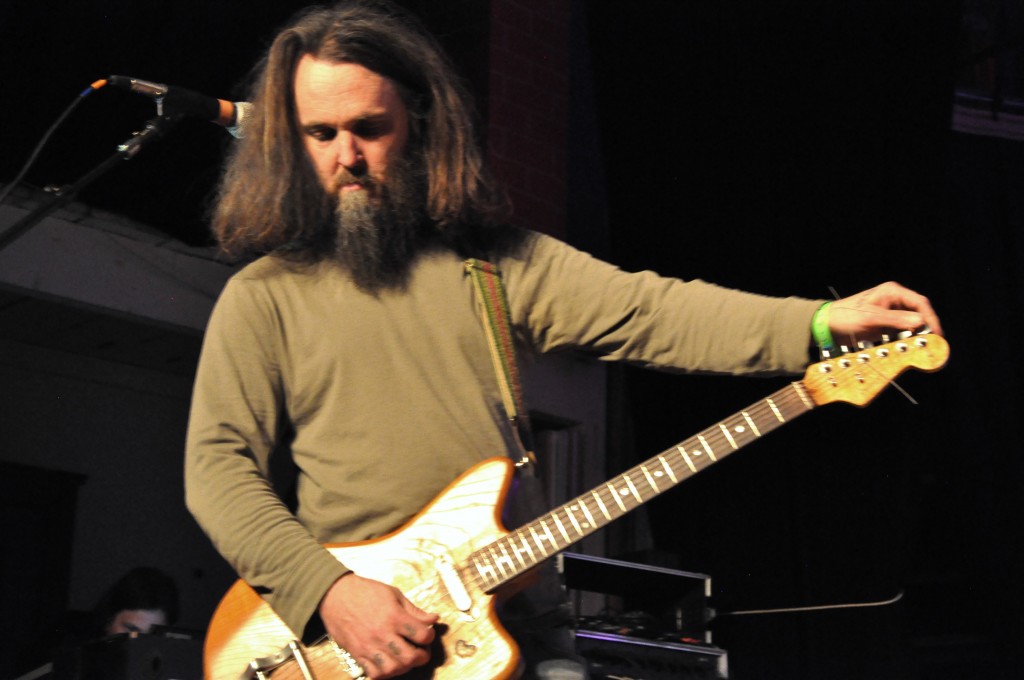 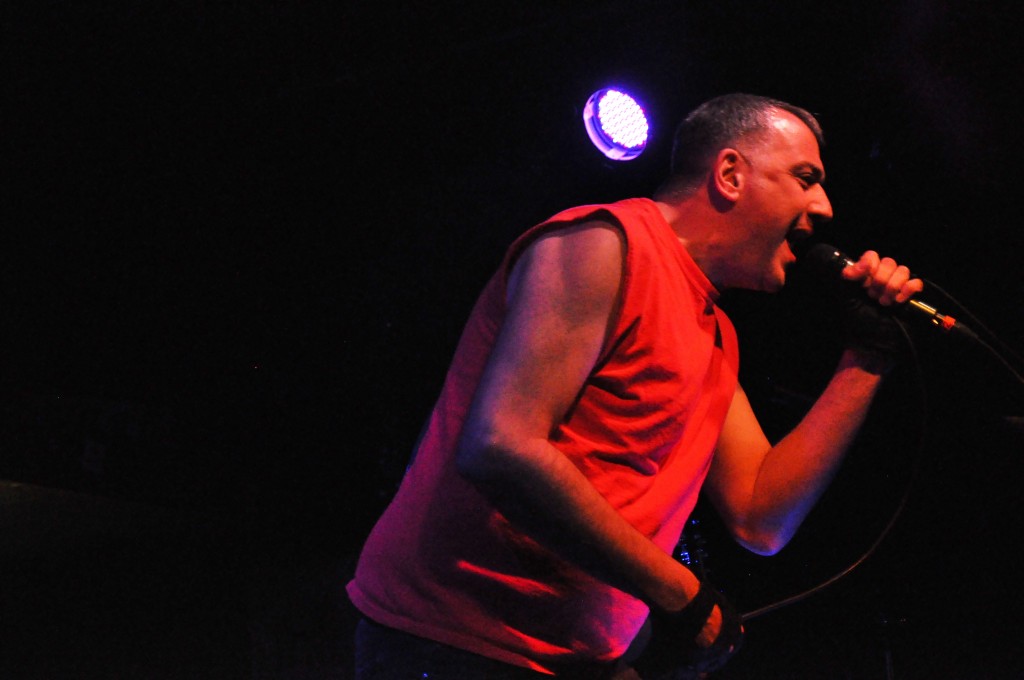 Thursday is when it all becomes official and the jam-packed schedule of events begins. It’s nice that everyone gets to put on their own thing and has some pride of ownership in the whole of these moving parts, but really, it’s about the music. There are so many choices that it’s hard to get humming. It’s time to get back to basics.

That means the Dwarves – punk rock made and played like it’s supposed to be done by dudes that have been doing it for 30 years. No over-tattooed bullshit. The Dwarves.  Done.

The festival is in full swing by Friday. Everyone seems to know how this works: crowds file in to see the band, then they file out to head elsewhere. It’s a testament to fine planning, but it’s also a sort of phenomenon: people actually know how to do this festival-attending thing.

On the streets, in the venues and at the shows, everyone is friendly. It’s one of the things that I like about Boise, although it still makes me slightly nervous sometimes. Even with the increase in population, the vibe is the same. The out-of-towners notice and begin to say “hi”, too.

We head to check out Gaytheist, because how can you not go see a band called Gaytheist? It’s a good call, because it turns out they kick ass: a nice tight 3 piece playing the music that punk rockers play when they learn how to play: kind of math-rocky, with complicated rhythms and time changes and rad lyrics yelled well. The singer, a mini Gary Floyd, picks up on the properness of the whole undertaking, and even though they are ready to play at 8:15, he says they won’t start until they are scheduled to at 8:30 so as not to upset any of the program-watchers who have scheduled their night so carefully. The order works and everyone plays along: no one falls out of the Fort.

We head to the all-ages venue the Crux next. We sit through a poppy band from Seattle, which prompts the quote, “This band loves the 90s, the clean nineties, where none of your friends died.” They have fancy haircuts, and everyone looks clean and now we know we are at a rock festival – because you have to sift through some mud to find the golden nugget.

That nugget is Divers. Holy shit this band is great. They sound just a bit like the Mescaleros and a lot like any number of bands that you will never get to see again. But these guys are here and they are now and they are earnest and it is their own. I’m not afraid to raise my fist to a song when it is deserved, and during this set it goes up a lot. There is a joyful pit where more than one hug is thrown and I find myself really happy for the kids there who didn’t get to see the Clash or the Replacements or any of those bands that really meant it when they said it. I’m wary of comparison at this point and so ask the frontman, Harrison Rapp, after the show who he would most like to be compared to: Paul Westerberg, Joe Strummer, or The Constantines.  “I would add Ted Leo” he responds, and he’s not far off. 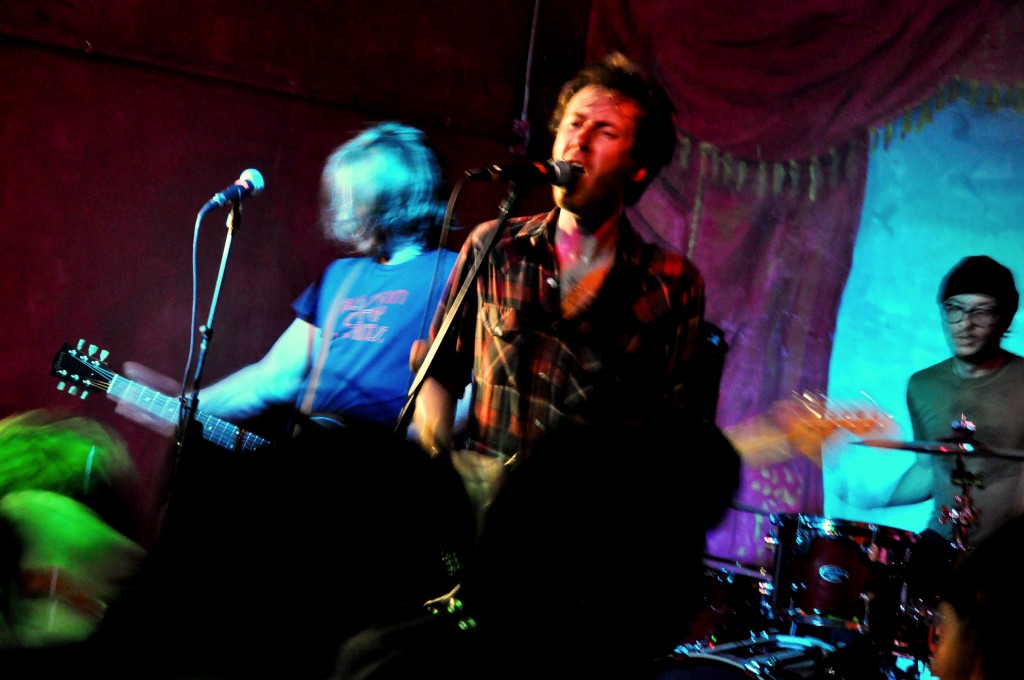 Saturday is another day, and no one is even close to ready to quit yet. We venture outdoors to the main stage. But first, we go to Rhoades Skate Park under the freeway, where 10 bands are all playing the same song simultaneously. It’s called Band Dialogue II, composed by Seth Olinsky. That many bands playing in that setting is chill-inducing, and the skateboarders just keep riding right along.

Budos Band is made for a main stage. A seven-piece from Staten Island wearing their uniform of black on black, these guys play a smooth funky groove. It’s not too much: you don’t dance to it, you just boogie. There was actually one band member who played only the tambourine. But the focal point was the bass player, wielding his instrument like a weapon, Gene Simmons without the theatricality: laying it down.

Michael Earl Craig and Magic Mouth and Built to Spill

Things start to blur a little at a certain point, so Sunday is a good time to hear the poet Michael Earl Craig read at Storyfort. This guy is good, and delivers the gift of the phrase “Practice saying, ‘Fresca, please.” Edges are fraying so it’s good to sit and listen to one voice. Words and meaning matter.

Riding bikes home, we hear music coming from somewhere just off the street and take a half-block detour to find two guys playing dense bluesy guitar and heavy hitting drums on the street: not advertised, not planned, just rocking. We stay with the other wanderers who heard the call and answered.

It’s the little things like this that are going to keep Treefort thriving. No one is mad if offshoots happen; rather than feeling like it is taking away from the main events, they are tolerated, even encouraged. We are here to be creative and supportive, and this is not just lip service to make a buck. This is the spirit that pervades, and it will be a saving grace as the festival grows.

What else can we possibly do? It is a common feeling on this last day, but people still drag ourselves out. We can’t pay any more attention unless you make us, so some bands get a short shift. One that doesn’t is Magic Mouth, a disco-soul outfit out of Portland. These guys, led by a soul singing maestro up front, remind us to boogie.

And that’s the way to end the night: dancing with friends and strangers alike. We finally make it over to el Korah again, where it began 4 nights ago, and where Boise’s own Built to Spill has been anchoring last 3 evenings to overflow crowds. There’s room tonight. The play a set of all cover tunes, guitar god Brett Netson floating into and over the crowd. They play and we dance: the Clash, Captain Beefheart, the Smiths. They invite us onstage, all of us, and we dance together.

And that, my friends, is how you end a festival, Boise style.