In late 1979 there was no bigger band in America than The Knack.  Their debut CD:  “Get The Knack” ruled the charts led by the infectious hit “My Sharona.”   Prescott Niles was a vital part of that power pop quartet.  Defining their sound for several under rated albums.  He remained with the band until their last show in 2008.  Rocker’s Keith Valcourt caught up with the man behind one of the most famous bass lines in history at The First Annual Rock & Roll Autograph Show in Los Angeles. 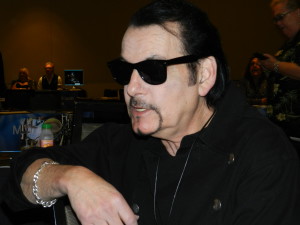 Rocker: Have you had a lot of contact with the fans over the years?

Rocker: What is the most common thing they say to you?
Prescott:  Most people, still to this day, say, “I really love your song (“My Sharona”) what’s it about?”  What’s a Sharona?  At first it was a mystery.  Sharon in Sharona in Israel.  Which means rose.  I’m not sure why people always ask, “What’s a Sharona?” Sometimes I explain it’s about a girl.  Another time I said, “I’m glad you asked me.  It’s one of those devices.  It kind of vibrates and makes girls excited.” The guy said, “I thought so.”  That was a Candid Camera moment.  I could tell them it meant whatever I want. And I did.

Rocker: What is the strangest thing you have ever been asked to autograph?
Prescott:  I’ve signed somebody’s buttocks:  The.  Knack.  On word on each cheek.  I don’t know.  One guy gave me a bill once, like, a phone bill.  I asked, “Why am I signing this?”  I’ll sign anything.  I don’t know I’ve been through a lot of shit.

Rocker: From the outside it appeared the band came out in 1979 and exploded very quickly.
Prescott:  When we got signed people assumed that Capitol groomed us and made us into what they wanted.  No.  We put hard work in before we got signed.  Capitol was just one of the many companies that were bidding for us.  Polygram offered us a million.   We went with Capitol for a hundred grand because we liked the Capitol thing.  We loved the logo and all grew up with The Beatles and The Beach Boys.  The whole company was behind us from the guys in the mail room to the president. They would all come to our shows.  We really made the right move.  Because if you take a million dollars upfront you can owe a million dollars.  And nobody knew at the time if it was going to sell or not.  Having Mike Chapman as a producer was all I need to know.  He was working with Blondie at the time.  Then he was working with us.  When he told us in the studio, “You’ve got a number one hit here.”  We believed him.  When it got to be number one I gave him the biggest hug in the world. Mike Chapman had a lot to do with the band’s confidence.

Rocker: Is it true that Capitol didn’t want to release “My Sharona” as a single?
Prescott:  True.  It was obviously the hit.  They shipped the album to radio without a single.  The album went to number one before the single.  They had to rush release “Sharona” after that.  Which shows you that the audience and the listeners helped dictate the single back then.  Which was fine with me because it became what it became.

Rocker: Your bass parts of “My Sharona” and “Get the Knack” really stand out.  Was it a conscious decision to have the bass sound be out front instead of in the groove?
Prescott:  On “My Sharona” it had to be.  To me the drumming on “My Sharona” is what made the song. Bruce (Gary ) was one of the greatest drummers I’ve ever played with.  And he truly doesn’t get enough kudos for how great he was.   That beat, I’ve played with a lot of drummers that replaced him in the band, that beat is unique.  What he does in the middle is not easy to do.  His sound, the way he tuned his drums, his technique made the song. Yeah my bass was good.  The guitar solo was brilliant.  It’s an iconic solo that Berton (Averre) never really got credit for.  It really is a hard song to play.  Like the group never got credit for what great musicians we were.

Rocker: Everyone knows “My Sharona.”  Does it bother you that the song overshadowed the bands other songs and albums?
Prescott:  I re-listened to the first album again the other day.  The rhythm tracks are great.  All the songs.  I defy anyone in the rock/pop new wave era to even stand up to it.  I’m not talking about my own ego.  The vocals.  The guitar work.  The parts we played.  Great.

Rocker: Do you have a favorite Knack album?
Prescott:  “Round Trip” the album we did with Jack Douglas.  Jack came in and said, “I think you’re a great band.”  We were the first band we worked with after John (Lennon) passed away.  He was a little out of it at times, but then he played a lot of outtakes of him and Yoko fighting, which I loved. “Road Trip” for me is the best Knack album.  The drum sound, the bass sound– all incredible. “Get The Knack” is great because most of the album was done in one or two takes.  We did basic tracks with minor overdubs. Recorded the whole thing in two weeks.  Because we could duplicate it.  “My Sharona” was done in one take with a little guitar overdub and Doug (Feiger) punched in some vocals. That was it. Because if you got it and you played it enough, It’s got it’s magic and you capture that.

Rocker: Who were your musical heroes?
Prescott:  John Entwistle growing up.  Later on Chris Squire.  Jack Cassidy from the Airplane (Jefferson). McCartney.  James Jamison.  All these guys got into my brain.  I tried to incorporate all the styles into my performances.

Rocker: As of late you’ve been playing with Dale Bozzio in Missing Persons?
Prescott:  I’ve been playing with Dale.  Doing some stuff with Micki Free and Carmine Appice. That’s a real power trio.  I’ve played with Carmine several times over the years.  Love Carmine.  I saw Vanilla Fudge play when I was seventeen years.  Tim Bogart was a fucking phenomenal bass player as well.  I’ve also been playing with the Classic Rock All starsss with Mike Pinera from Iron Butterfly, Albert Boshow the drummer from Blue Oyster Cult and Goldie McJohn.  I do shows with them.  Never thought I would be playing “Don’t Fear The Reaper,” “In Da Gadda Da Vida,” “Magic Carpet Ride” and “My Sharona” in the same set. Plus I do session work and my kids have a band called “Gateway Drugs.”  My daughter Olivia plays guitar, my son Gabriel plays guitar and sings.  But he’s actually an amazing drummer.  Noah plays guitar and sings.  They have become what they wanted to become.  I didn’t make them do it.

Rocker: When was the last time you played with The Knack?
Prescott:  The last gig we did was 2008.  That was the last gig.  We played the Warner Center in Woodland Hills then a show in Hemet and that was that.

Rocker: Doug Fieger died in 2010.  What was your relationship like with him at the end?
Prescott:  Doug was a control freak megalomaniac.  To put it lightly.  He made a lot of great decisions.  A lot of bad decisions…  We turned down playing the Grammys.  You figure that?  We had two nominations that year. I could give you a list of things that if we have done – including a movie with Dick Clark – we would have become more famous.  Berton and I are still friends.  We both love classical music.  When The Knack toured, Berton and I would always room together because none of us would want to room with Doug or Bruce, because they were wacky.  Bruce and I had a good relationship.  He was one of my mentors.  We played in a fusion band before the Knack.  Bruce was the greatest drummer in the world.  Doug was a complex character.  Once he got into the AA program, he saved so many lives, gave of his time…   Really, it made a better person out of him.  I respected him, and was with him at the very end.  It’s a pleasure to still be here and keep rock and roll alive.