He may not have any Earth Wind and Fire tickets for you and your little brother, but actor Robert Romanus, best known as “Mike Damone” from “Fast Times At Ridgemont High”, has a cool new coffee joint, Bob’s Espresso Bar, which offers up java, snacks and nightly entertainment on Lankershim Blvd in the heart of North Hollywood’s (NOHO) arts district.  If you are in Los Angeles, this intimate joint is the perfect place for your next late night hang,  West Coast Bureau chief Keith Valcourt sat down with Bob over tea (Hot, not iced. I saw what happened to Jennifer Jason Leigh) to discuss his coffee clubhouse, acting career and band Pappa’s Kitchen. 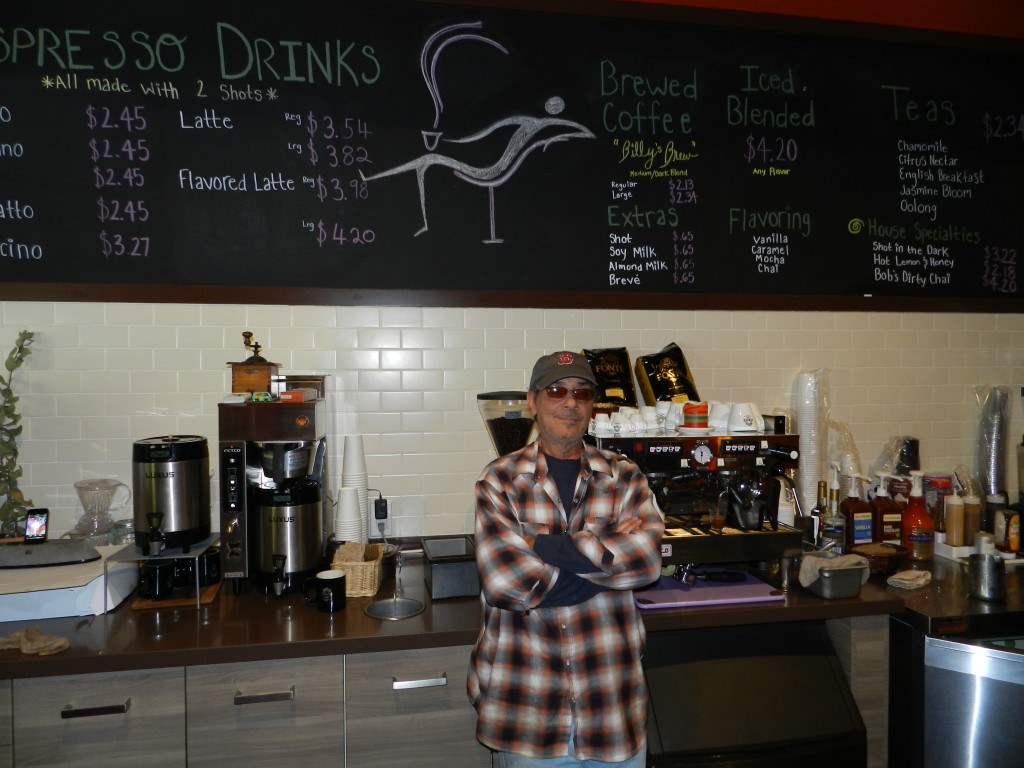 Rocker: Let’s talk about your acting career a bit.  Your first major role was in “Foxes.”  How did you get that part? And what was it like?

Robert: Well I auditioned for it.  Got cast in it and it was horrifying experience because I had no idea what I was doing as an actor or technically.  The very first scene that I had in “Foxes” is the concert scene.  There is a crowd of about two hundred people and I have to walk down this long hallway, hit a mark and say my line to Jodie Foster.  But I didn’t know what a mark was.  It took twenty-eight takes.

I put everybody on overtime. It was horrifying.  The next day the director, Adrian Lyne, came in and said, “Listen Scott I know you can do it.  I saw you do it yesterday.”  Then I had my second scene and it went well.  I was on my way.  Three years later I got my next job.

Rocker: Obviously that next job was “Fast Times At Ridgemont High” which became a classic. Did you guys have any idea when you were making the film it was something special?

Robert: No.  Who would have known?  You never know that.  When you think it is going to be huge it turns out like shit.  You can have the best script, the best actors and the best director, the best of everything and still nothing.  You gotta have a little bit of mojo to make it special.  “Fast Times” had that little bit of mojo.  It was like fairy dust that made it all work so well.  People love it and it has lasted so long.  You couldn’t predict that.

Rocker: Your character Mike Damone was a bit of a dick.  Was it fun to play the bad guy?

Robert: It is always fun to be the bad guy.  Especially for me, because in life I am such the nice guy.  Break that dude out once in a while.  I enjoyed it.  They’re fun.  Good guys are fun too.

Rocker: Which do you prefer?

Robert: Honestly it doesn’t matter to me.  I will make the good guy interesting.  And fun.  Give him a sense of humor.  Make him as interesting as the bad guy.

Rocker: Actors always say how awkward sex scenes are.  How was doing the love scene with Jennifer Jason Leigh?

Robert: It was uncomfortable for the first ten minutes.  But once you’re walking around naked in front of people for a few minutes it’s not a big deal.  Everybody has seen me and I’ve had all the embarrassing moments I’m gonna have.  So let’s get on with the show.

Rocker: Were you typecast after “Fast Times?”

Rocker: Was there anything you turned down and now look back with regret?

Rocker: You were the guitar teacher in “The Runaways” movie.  How did that come about?

Robert: Total audition.  I think I got it because I’m a musician.  If you tried to make sense of this guitar lesson it wouldn’t work unless you knew how to play guitar.  I had a little experience so I was able to put it into real words.   Then it sort of flowed.  It was a lot of fun.  I got on the set with Joan Jett.  She’s scary.

Robert: Did she really?  You don’t want to piss her off!  But that was really kind of fun.  I worked with Kristen (Stewart) and the director.  Once again the scene was there but it wasn’t quite there.  We just rehearsed it, went over it a few times.  Worked it to where it went a little more smooth.  Then went in and shot.  Great.  One day, then back to the espresso bar.

Rocker: Of all your acting gigs do you have any favorite roles?

Robert: I hate to sound boring but there is never a moment in my acting career that I didn’t enjoy thoroughly, no matter what the circumstance.  I could be outside in a t-shirt pretending it’s summer in the dead of winter, freezing my ass off, but as soon as you say “action” it’s hot and sunny.  That just feels great and I enjoy that so much.  The most fun roles I’ve ever had have been in theater, because you have more of a chance to stretch and do other things.  Stakes aren’t as high.  There may have been bad days but every role has been a precious experience.

Robert: Loved C.H.I.P.S.  Here’s a funny story about that gig.  They had me riding a motorcycle and I told them I could ride.  My first scene with on the motorcycle I’m on a freeway on ramp.  I’m supposed to go down the ramp.  Camera is there.  The guy yells action.  Now this was a high performance bike, I was used to Honda 360s, a smaller, slower bike.  He yells action!  I hit the gas, popped a wheelie and headed straight for the camera man.  Everything tipped over.  Thankfully nobody really got hurt.  But from that take on it was this:  “Ready?”  I would be sitting there with my helmet on with the visor up.  I said, “Yeah, yeah lets do this thing.”  I’d lover the visor and then the director would yell “Cut!  Okay lets bring in the biker.”  They wouldn’t let me ride it again, which was smart of them.

Robert: I guess.  I haven’t really paid attention.  I just did “Cougar Town.”  I’ve got a couple little things.  I don’t really keep track of it.  This place, “Bob’s Espresso Bar”, has really occupied ever ounce of my energy and time for nine month.  If I get a nice gig in-between…  I know I did “Legit.”  That’s a really fun show.   I am always looking for work.  It’s what helps me support this place.

Rocker: When did you open up “Bob’s Espresso Bar?”

Robert: We’re in our ninth month. We opened on January 21st.

Rocker: What inspired you to do it?

Robert: Well, I love coffee, first and foremost.  I like coffee houses.  I’ve always had this fantasy of the coffee houses from the sixties with all this great music and entertainment that came out of them; comedy and so forth.  I love music, comedy and art.  I switch out the art here on the walls once a month for new local artists.  I like artists who don’t have any other place to show their work.  I’ve always been one to go to a coffee house instead of a bar.  Not really a drinker, I always drink coffee.

Rocker:  For you then, this space is about things happening like music and performance?

Robert:  It’s very much about that.  I would love this to be a place where people say, “Let’s go down to Bob’s tonight and see who is playing.”  They know the act is going to be good, whether it’s comedy or music.  I’m building that.  I like to try a lot of new artists.  My ultimate goal is that you people come around to see what’s going on, and will get a coffee and discover something cool.  Some kind of entertainment that doesn’t cost you much.

Friday night is stand up comedy.  The other night Bill Burr came in to say hello and he got up and did ten minutes, It was awesome!  I’d like to get somebody popping in like that every once in a while. I get twenty-five to thirty comics for the open mic, no audience, just the comics.  But that’s sort of the way it goes.  We also have spoken word.

Rocker: Why did you pick this location–North Hollywood?

Robert: Well, I was living up the street and I was looking for a place like this.  I couldn’t find it in the neighborhood.  A real coffeehouse where you could hang out.  This to me feels more like a clubhouse, a place to come and hang out.

Rocker: Are you here every day?

Robert: I’m not here every day, all day.  I was for maybe the first six months.  Now I have a small staff.  I am almost always here in the evenings because I need to be here to run the P.A., run the sound system to make sure everything goes the way it should.  I’m usually around from two in the afternoon till closing.  You can find me here a lot.

Robert: Second Saturday of the month.  We have 7 CDS, so we just jam on our music as long as the people stay around.

Rocker: How would you describe the band’s music?

Robert: I like to call is acoustic rock.  It’s not really Americana, it’s a little funkier than that.  We’re influenced by people like John Hiatt, JJ Cale and Van Morrison.  But we have a sense of humor too.  It’s coffeehouse music.  (Laughs)

Robert: Yes, that’s exactly right.  It started back in 1979. We were both singing waiters at a place called “The Great American Food & Beverage Company.”  Ricky Lee Jones worked there and Severin Brown.  There was a talented pool of inspiring singer/songwriters.  That’s where we met.  Then some years later when we were both going through divorces, around 1996, we decided to get together and write, just stream of conscious stuff.  “My wife she’s a fucking….”  Then after doing that on Tuesday and Friday nights for years we have actually written some good songs.

Rocker:  It’s still the two of you guys who first met in 1979?  How do you stay working together?

Robert: I haven’t found anyone else that would play with me, obviously.  (laughs)  It’s true!  We have grown quite a bit in 17 years.  We each bring something kind of different to the table., so it’s a nice table.  I’m a little more a musician than I am a lyricist.  Steve is a good musician be he’s also a bit of a wordsmith.

Rocker:  What order do you rank your passions of acting, music and the espresso bar?

Robert: In order of passions, music has always been my real passion.  It’s where I started as a young kid playing drums.  It’s sort of what I connect to.  Acting would be second because it is very much music.  You get the same connections and stuff.  Then the espresso bar.  I needed a job.  An income stream.  Trying to figure things out.  I’ve got three kids.  I figured I could either be working at an espresso bar somewhere or I could try to open one and turn it into a cool little spot.  It’s hard.

Rocker: Sure 90% of new restaurants fail.  So you’re a brave man for doing this.

Robert: Or I’m an idiot.  (Laughs)  I’m still here. It’s nine months and everything I own is in it.  But I’m not so in debt that a little gig wouldn’t pull me out of it.  One day I think this place will be a nice little income stream.  Not that I’m gonna retire on it.  But it will be a destination for good coffee, good company and good entertainment.  I see the potential here.  It’s my mission to make this thing work.  I may be so fucking smart when this is all over.