The Return of PiL – Live at Royale, Boston 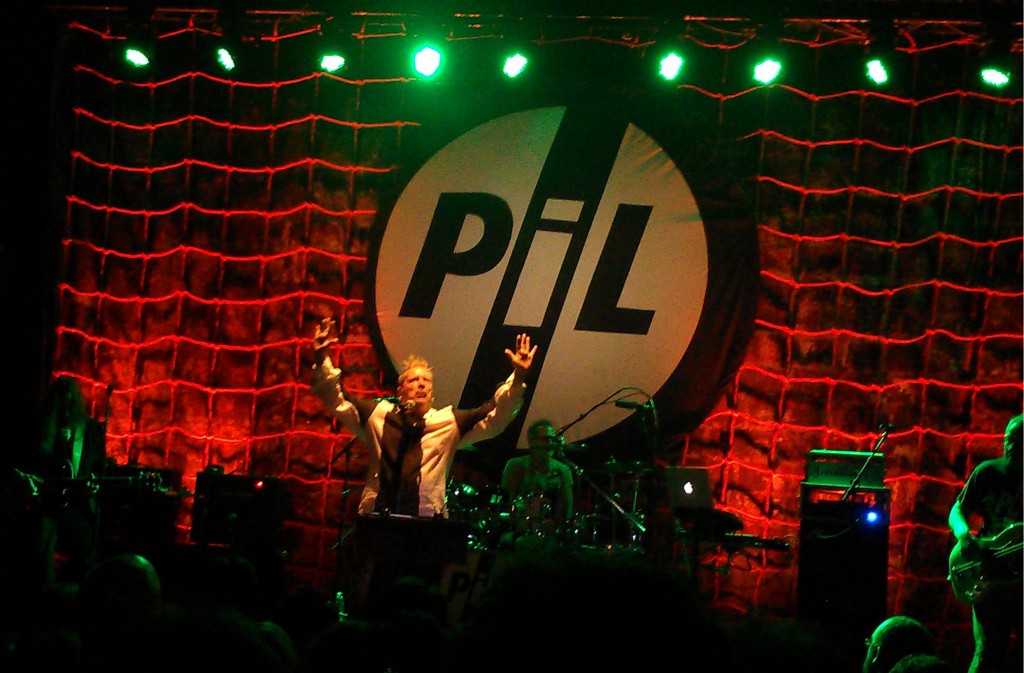 Last time I saw John Lydon in Boston, he was playing a not-very-inspiring show with the Sex Pistols; a show that proved that even the greatest cultural screeds can come back as party music. Fate is a cruel thing: First you’re striking fear into the heart of the British Empire, then you’re splitting a bill with the Dropkick Murphys.

But maybe that was Johnny Rotten, fictional character, and not John Lydon, puppet master. Because Lydon once fronted a fearsome little band called Public Image Ltd., who made some rather startling records thirty years ago. That version of PiL—with Keith Levene mangling a guitar, Jah Wobble magnifying a bass, and Jeanette Lee apparently doing something—combined Krautrock and deep dub influences with a corrosive worldview; Lydon keened and yowled because proper singing wouldn’t convey quite enough disgust.  PiL got more user-friendly and less wonderful as it went along, even scoring a couple of hits before fizzling out in 1992.

And that was it, until Lydon—after a decade-plus of near-retirement—got some quick money from a butter commercial in the UK, and sunk it into resurrecting PiL.  Which isn’t the same as reuniting the band, because none of the well-known alumni are aboard: lead guitarist Lu Edmonds and drummer Bruce Smith were in the late-‘80s PiL, bassist Scott Frith is new, none ever played with Levene/Wobble. And Lydon’s butter money is likely half-melted by now, because the quite solid new album (the self-released This is PiL) barely raised a ripple, and the shows have been decidedly less than sold out. At the Royale in Boston, he drew roughly half the crowd that had come for Adam Ant seven nights earlier.

Which didn’t stop him from treating the show as a victory lap. Opener was the transitional single, “This is Not a Love Song” (originally Levene’s last with the band, though he was wiped and replaced with horns on the 1984 hit); it was a killer hook then and remains one now, and its satire still connects. First time around its central lyric—“Big business is very wise/ I’m crossing over to free enterprise” sounded like a final kiss-off to hippie idealism; now it sounds like a Republican campaign song. It’s an even better song if you’ve heard the bootleg Levene-produced version—and the band obviously had, since that’s the version they played. It’s more spare and guitar-driven, without the whiteboy funkisms.

That was the first sign of what this PiL is all about: Harking back to the first edition of the band. “Albatross” followed, even longer than the ten-minute version on Metal Box but retaining its lurching and ominous groove—You can’t make party music out of this. Lyrically it was sparer than the original, but Lydon didn’t forget the central line: “I know you very well/ You are unbearable.” Plenty more cathartic moments followed: “Flowers of Romance”, all drums and Mideastern ambiance (and true to the record, no bass); “Religion,” with references to church sex scandals; “Death Disco” with the screeching “Swan Lake” riff. Intense? Sure. Nostalgic? A little, but it helps that this material never got much of a live airing the first time and alt-rock radio ignored most of it. And the band took every occasion to stretch things out: Let’s face it, this is a jam band, but in the best exploratory sense.

As for Lydon, it’s hard to take your eyes off him: Even with a few additional pounds and the world’s last remaining orange Mohawk, he’s got the piercing stare down to an art. And for someone who used to spit at the notion of rock stardom, he’s quite the charismatic performer—whether leading sing-alongs (“Anger is an energy….What is anger!?”) or gesturing to include the audience when singing “What are friends for?” on “Disappointed”.  His new nicer-guy image was somewhat blown at the start of the encore, when he got nastier than necessary in putting down a woman who’d unsuccessfully tried to jump the stage(It was curious that he berated her for being drunk since Lydon swigged liberally from a gallon bottle of what looked like good bourbon; anyone that close could’ve probably gotten a contact buzz). But he made amends by singing off, after a long encore, with “We are PiL, and we do it because we love it!” By all evidence he meant it, man.