P.J. Soles will forever be the Riff Randell, the character she played in “Rock & Roll High School.”  An earnest songwriter trying to get her tunes to punk legends The Ramones, she was the cool chick with the awesome clothes who got to blow up her high school.  Lusted after by men of a certain age and idolized by girls who wanted to be her, she was the dictionary definition of cool.  She was Riff Randell.  Although P.J. also starred in a slew of other films, most memorably the original “Halloween” alongside Jamie Lee Curtis, in our hearts she remains Riff.

West Coast Bureau chief Keith Valcourt caught up with P.J. At the 8th Annual Johnny Ramone Tribute, a star studded yearly event held at the Hollywood Forever Cemetery – where Johnny and bandmate Dee Dee are buried – to discuss the rock and roll life.

Rocker:  What do you remember about the first time you met Johnny Ramone?
P.J. Soles:  Johnny Ramone?  Aaaw.  I thought he was so cute.  That’s what I remember. And shy.

Rocker:  Legend has it he was a surly guy?
P.J.:  No.  I didn’t see that.  When we first met, all of us, I’m speaking of the cast members, I think it was the first day of filming.  The band came to the set and were very quiet and shy.  I wondered what was going on there. We hadn’t seen them in concert yet, we had only heard their cassette, and we were all taken aback about how quiet they were.  We ran a couple of lines in the first scene in the hallway and they couldn’t get it out.  Then there was a powwow and the director Allen Arkush said, “Were going have to cut a couple of these scenes because I don’t think it’s gonna work.”  That was day one.

That same day.  I also remember when we broke for lunch they went and sat in a trailer.  We wondered why they weren’t in line for lunch.  I grabbed Johnny and said “Come on you can have lunch.” He said, “Oh, we don’t have to eat there.”  I said, “Yes, you do.  You’re cast members and allowed to eat there.”  They reluctantly came out.

Rocker:  Did they finally relax on set?
P.J.:  Yes and no.  Mostly, they stayed by themselves.  What was so endearing was even the times that they did have dialog, even though they goofed it up, it was kind of cool.  It worked for their characters.

Rocker:  How did you land the role in “Rock & Roll High School?”
P.J.:  Oh gosh, I went on four auditions for the part.  Allan Arkush told me afterwards that he and co-writer Richard Whitley had seen me in “Halloween” and the two of them liked me.  So I went up.

On the fourth audition Rosanna Arquette was there too.  She said, “What are you doing here?”  I said, “I’m here for the final audition.”  She said, “Well the part is mine.”  Oh really?  (Laughs) Then I went in.  At the end Roger Corman said, “Just put a little bit more blonde in your hair and you got the part.”  Then I walked out past Rosanna and kinda just gave her a smile like… “The part’s mine”.  She has been at a couple of these memorial events.  I don’t know how she feels.  She’s never been that warm.  I think she probably feels she would have been more of a punk Riff Randall where mine was more of a sweetheart.  I stuck to the fact that I was a songwriter.  Not a groupie.  I wasn’t into meeting the band so much as wanting them to play my song.

Rocker:  Why does every generation re-discover “Rock N’ Roll High School?”
P.J.:  It’s awesome.  I think it’s just so funny and campy.  The fact that The Ramones are in it makes it special.  Any other band I don’t think it would have had the longevity.  They added an element of sort of danger and awe.  Coupled with a group of high school kids that blow up the high school at the end.  It was a perfect combination.  What kid hasn’t wanted to blow up their high school?

Of all your acting work which role was your favorite?
P.J.:  It’s definitely “Rock & Roll High School.”  I had the biggest part.  I had the most fun.  You got to remember back then we shot films in three weeks.  Twenty one days.  You did one of two takes and moved on to the next set up.   We had a lot of fun.

Do you have a favorite Ramones Song?
P.J.:  I think “Lobotomy” stands out.  I just love the way Joey sings it. I don’t know, I like all of theirs but that one stands out.    And “I Wanna Be Sedated.”  I guess I should have answered well “Rock And Roll High School.”  (Laughs)

What are you up to these days?
P.J.:  Well actually Riff Randell has become a songwriter.  I have always written poems and songs with various husbands and nothing came of it.   My boyfriend has a country band called Cheap Rodeo.  I have written the lyrics to five of his songs.  I’m very proud of those songs and I can’t wait for the CD to come out. 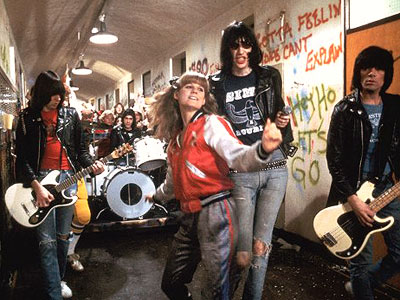