Do they know it’s Christmasannukahtime At All? 26 Rocking Gifts for 2014

Is it that time again?  PRESENT TIME?  Sorry if we seem a little EXCITED, it’s just, we love us some presents down Rockerzine way.  And with that in mind we welcome you to our 3rd Holiday Goodie Guide!  Whether you’re giving or getting we found plenty of cool stuff to be excited about this year so without further ado… go get them gifts! Thanks to this year’s contributors Erin Amar, Kelly Cammile Patterson, Amy Prohaska, & Keith Valcourt

These groovy guitars are made from repurposed material like motor oil and surf wax cans. Just imagine playing Sleigh Ride by The Ventures on this bright yellow guitar. If you’re going to order one of these babies, please do so on a Friday cause for every guitar sold, they donate one to a youth music education organization. – AP 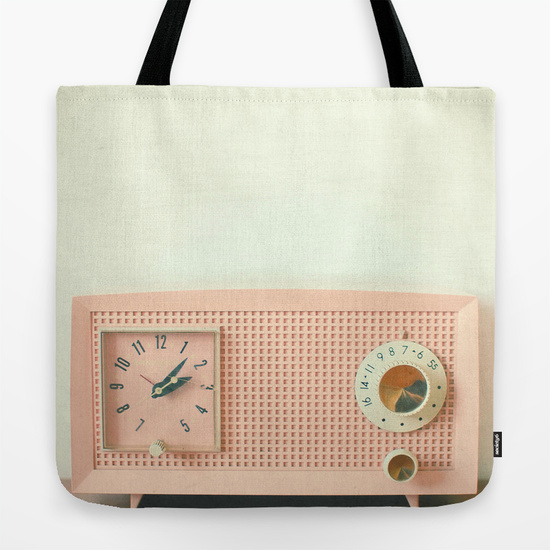 For your favorite bag lady. This tote bag is so cute and retro. Complete with an image of an old school clock radio in Barbie pink, who wouldn’t enjoy carrying this around? – AP 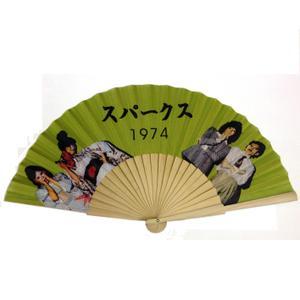 It seems hard to imagine that it’s been 40 years since Russell Mael of Sparks let fans know “This Town Ain’t Big Enough for The Both of Us / and It ain’t me who’s gonna leave!”

Show your devotion to the brothers Mael with one of these FAN-tastic FANS (get it?) which features art from the Kimono album cover, Sparks written in Japanese and is made with traditional Japanese hand folding techniques.  Bonus: female Sparks fans of a certain age will also find these extra useful for keeping cool – in more ways than one – namely during hot flashes (talk about playing to your base). 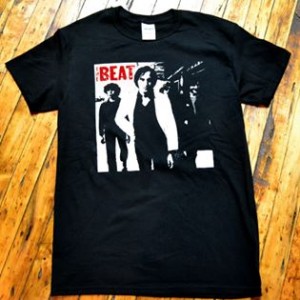 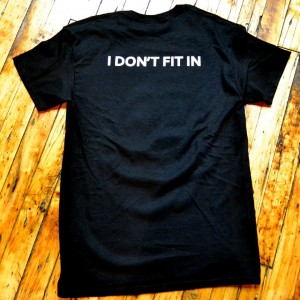 The King of Pop nailed it when he plastered the back of his new T-shirt with “I Don’t Fit In”, the title of the 2nd song on The Paul Collins Beat’s anthemic 1979 debut.  What a fine way to let your friends know not only do you love this legend of power pop, but you’re happy to stand out as one of “the cats who are so in”.  -EA 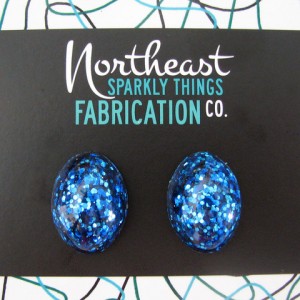 Has someone on your shopping list requested sparkly jewels and diamonds are beyond your budget?  With collections like The Tropical Collection, The Turntable Collection and The Cocktail Lounge Collection, there are so many pretty colors to choose from and they’re all sparkly.  -AP 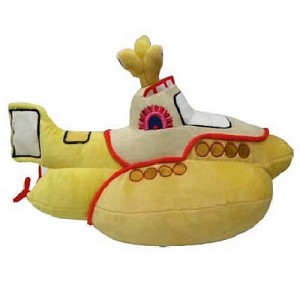 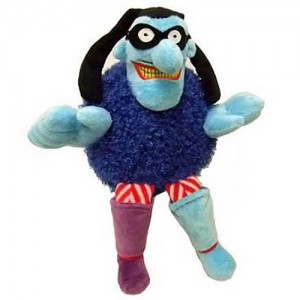 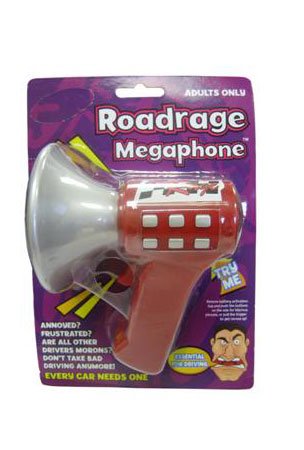 Here’s a toy for the road rage-afflicted on your gift list.  They can choose between censored and uncensored versions and feel a little less alone while navigating the atrocious drivers (i.e. everyone else) on the roads! – KP 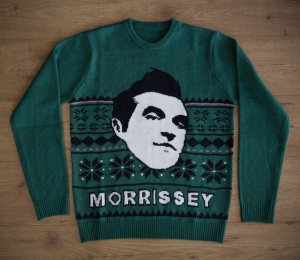 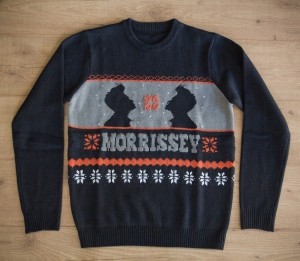 Need a present for your girlfriend in a coma? We know we’re serious about this sweater and heaven knows we wouldn’t be miserable if we found this under our tree this year. – AP 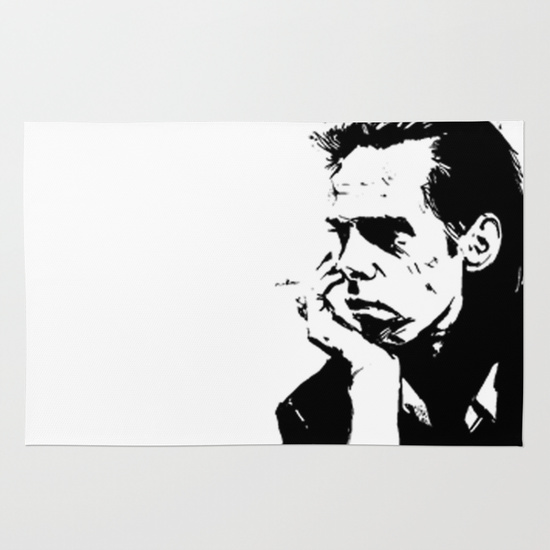 Do you have any bad seeds on your holiday list this year? Don’t go with the old stand-by of coal in their stockings, check out these Nick Cave rugs, ‘cause you can’t truly have the Bad Seeds without Nick Cave – AP

“Don’t despair, Just because it’s Christmas” Fear’s Lee Ving once soulfully implored his fans, before moving on to his true message for the holidays.  Now you too can echo his sentiments with this fancy fleece FUCK CHRISTMAS sweater from Atom Age Industries.  Imagine the fun when you wear this to Christmas dinner, or even temple! – EA

It should come as no surprise that while silly bands all over the globe churn out T-Shirts, Canada’s Sloan is putting out a truly useful item for their fans to display their devotion – the Sloan Toque.  This new design, with pom-pom and snowflakes, harnesses both the power of winter and the power of rock to keep you warm this season. – EA 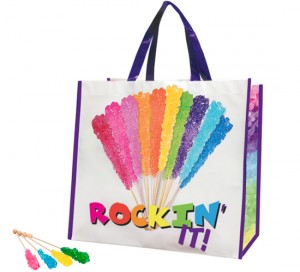 Reusable shopping bags are here to stay, so why not use one with rock candy swizzle sticks on it?  Dream of stirring the tropical beverage that awaits you as you wait in endless checkout lines! – KP 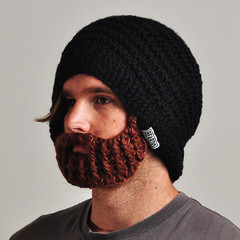 It’s a hat, it’s a beard, it’s a beard attached to a hat. It’s a great way to battle the cold wind and look oh so stylish.  – AP 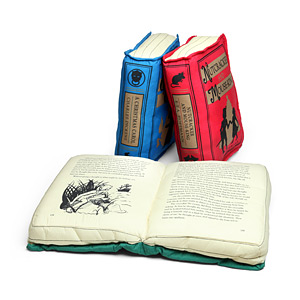 For your favorite sleepy bookworm. These pillows in the shape classic novels are great gifts for the literati as well as the sleeperati. – AP 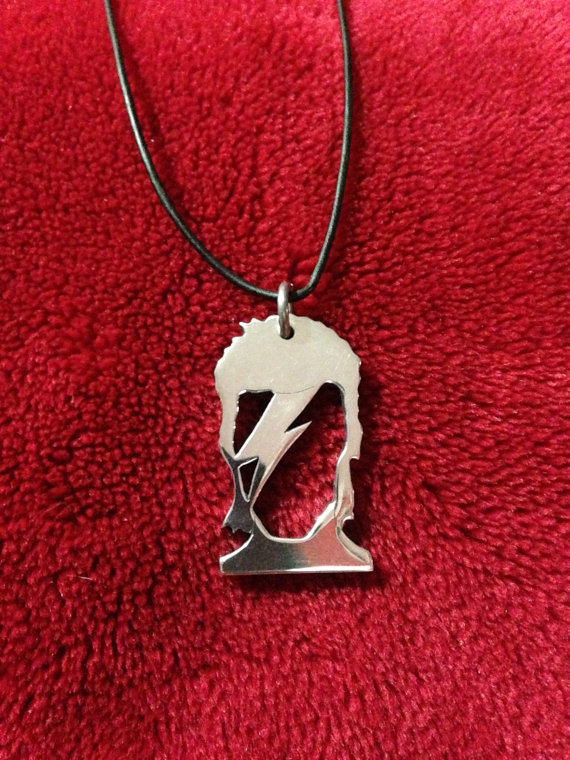 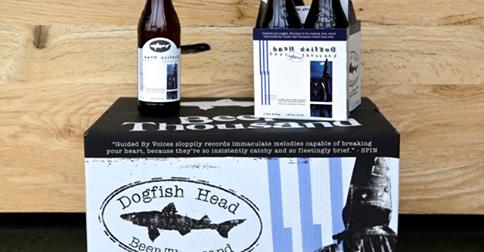 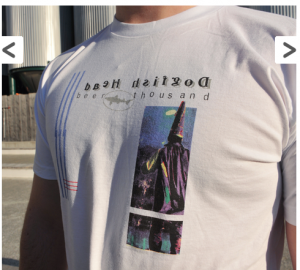 Dogfish Head created a beer in honor of Guided By Voices’ album Bee Thousand’s 20th Anniversary. Guided By Voices, and in particular founder Robert Pollard, are pretty darn synonymous with beer and with drinking beer on stage so this honor is well deserved. Dogfish Head Beer Thousand is in limited production but check out the beer finder and see if there’s any left in your area.  Also, there’s always the very cool t-shirt. Perfect for beer geeks and music geeks alike. – AP

Did you realize you can get almost any image made into a custom rubber stamp? And it’s cheap?  Lend legitimacy to the most foolhardy of projects and thoughts while the recipient happily stamps away! – KP 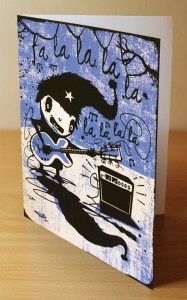 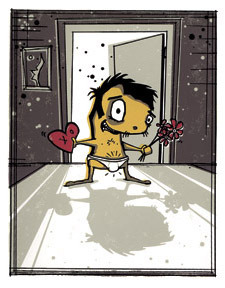 The art of Connecticut’s James Polisky is sweet and evil, sugary and creepy, and that’s what we like.  His website is full of hand screened haunted cutie pies gracing an array of clever including these nice rock and roll holiday cards and prints including our favorite – Mr. Romance – an image that basically resembles every man you ever went out with.  Well, we hope he does.  He is Mr. Romance after all…. – EA 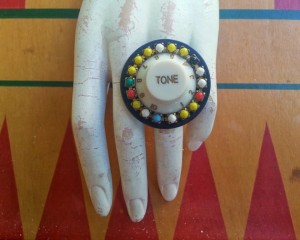 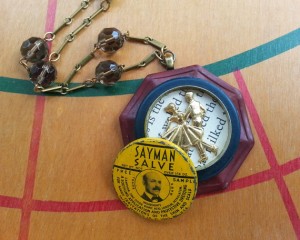 Mei-Ling Uliasz has a great eye for vintage pinbacks, knobs and ephemera she pieces together into little works of art some might call jewelry and others of us just call genius.  There’s blinged up Guitar knobs in pendant and ring form for your favorite rocker pal, but there’s also a fantastic assortment of vintage inspired collage necklaces each with a personality as clever as you.   Worst possible outcome of visiting her Etsy page?  This could become a habit. – EA 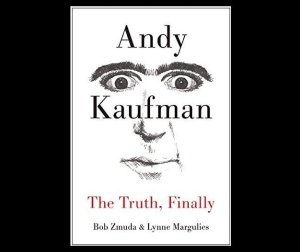 Andy Kaufman was never easy to figure out.  Was he the lovable “Latka” from “Taxi?”  The obnoxious jerk who wrestled women for fun and sexual gratification?  The ultimate lounge lizard Tony Clifton?  The answer is YES!  And NO!  And Maybe?

To mark the 39th anniversary of his death (which he may or may not have faked) Kaufman’s inner circle aka con-conspirator Bob Zmuda and Andy’s girlfriend Lynne Margulies come clean, releasing what they feel will be the final word on Kaufman’s wacky life.  The book reveals the deepest darkest secrets from inside the warped mind of a genius, but be forewarned, Sausage is delicious until you visit the meat packing plant and see how it is made.

The most shocking moments come in regards to Andy’s sex life.  We know from past books he liked hookers and spent quality time at the Bunny Ranch, but this new tome reveals he was also bisexual and possibly gay.  We also learn that Andy may have died of AIDS, not cancer – that is if he died.  Zmuda outlines several conversations between him and Andy where Kaufman asked how to fake his own death.

At its heart this book is a love letter to the ultimate prankster from the two people who cared for him the most, both who have dedicated their lives to not only preserving his legacy, but growing his small body of work into that of legend.  Neither of them want Kaufman to be dead.  Although Lynne seems to think he is.   Bob holds out hope against hope, often pleading in theses pages for his dear pal to return.  “Andy Kaufman: The Truth, Finally” is a most read from comedy fans, Kaufman fanatics and conspiracy theorists alike.  – KV 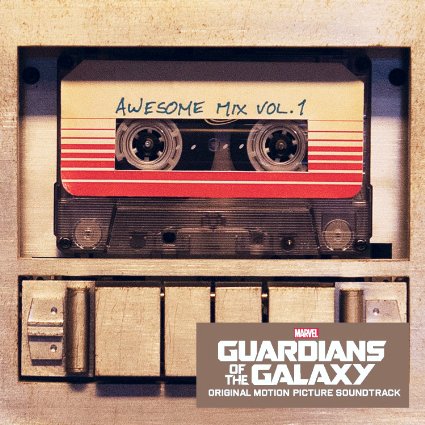 From the opening notes of Ooga-Chakka-Ooga-Ooga aka “Hooked on a Feeling” by Blue Suede, to The Runaways rockin’ “Cherry Bomb”, this soundtrack is an awesome mix of guilty pleasure songs and perfect gift for anyone who remembers AM Radio when there used to be songs on AM Radio. – AP 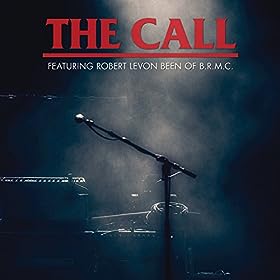 When The Call’s singer Micheal Been died of a massive heart attack while on tour with his son’s band Black Rebel Motorcycle Club, it signaled the end of his underrated college rock band.  So how on earth could they have booked a show to play L.A.’s legendary club the Troubadour in 2013.  I wondered that myself as I walked into the joint that night.  What happened next was magical.  Been’s son Robert Levon stepped in to fill his dad’s slot as singer and bass player and floored a packed house.  At moments he seemed to be channeling his late father as he wailed through the tunes.  The one time only show is captured here on a CD and DVD. It showcases the band and Been ripping through Call classics including “I Still Believe,” “Everywhere I Go” and “I Don’t Wanna.” – KV 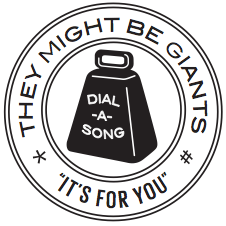 More than 30 years ago the two Johns of They Might Be Giants armed merely with a crappy answering machine made the world’s first “Dial a Song” number.  Oh what fun it was and as they advertised “Free, when you call from work.”  Now in the computer age the band have upgraded to a new system that lets you forgo all that messy dialing – a new song arriving in your mailbox every Tuesday for a year, all for a discount price. – EA

Okay, I’ll admit it.  In college I was addicted. Every Saturday morning I would sneak down to the lounge and indulge.  I had to have my fix.  My drug of choice?  Pee Wee’s Playhouse!  The subversive and ground breaking Saturday morning program was technically a “kid’s program,” but Pee Wee’s Playhouse was more than that.  Like Sid & Marty Kroft before them, Paul Reubens and company created a trippy cult classic that attacked your senses with wild character and music by Danny Elfman and Devo’s Mark Motherbaugh.

Unlike most re-issued and remastered TV show box sets, which offer nothing more than a few bonus features and slight picture improvement, this set is a visual masterpiece with stunning sound and images so vivid they literally jump off the screen, plus hours of bonus interviews, featurettes and more. So much more.  The entire series is here, including the holiday special. So, go ahead and release your inner child.  Get “Pee Wee’s Playhouse: The Complete Series” on Blu Ray.  – KV 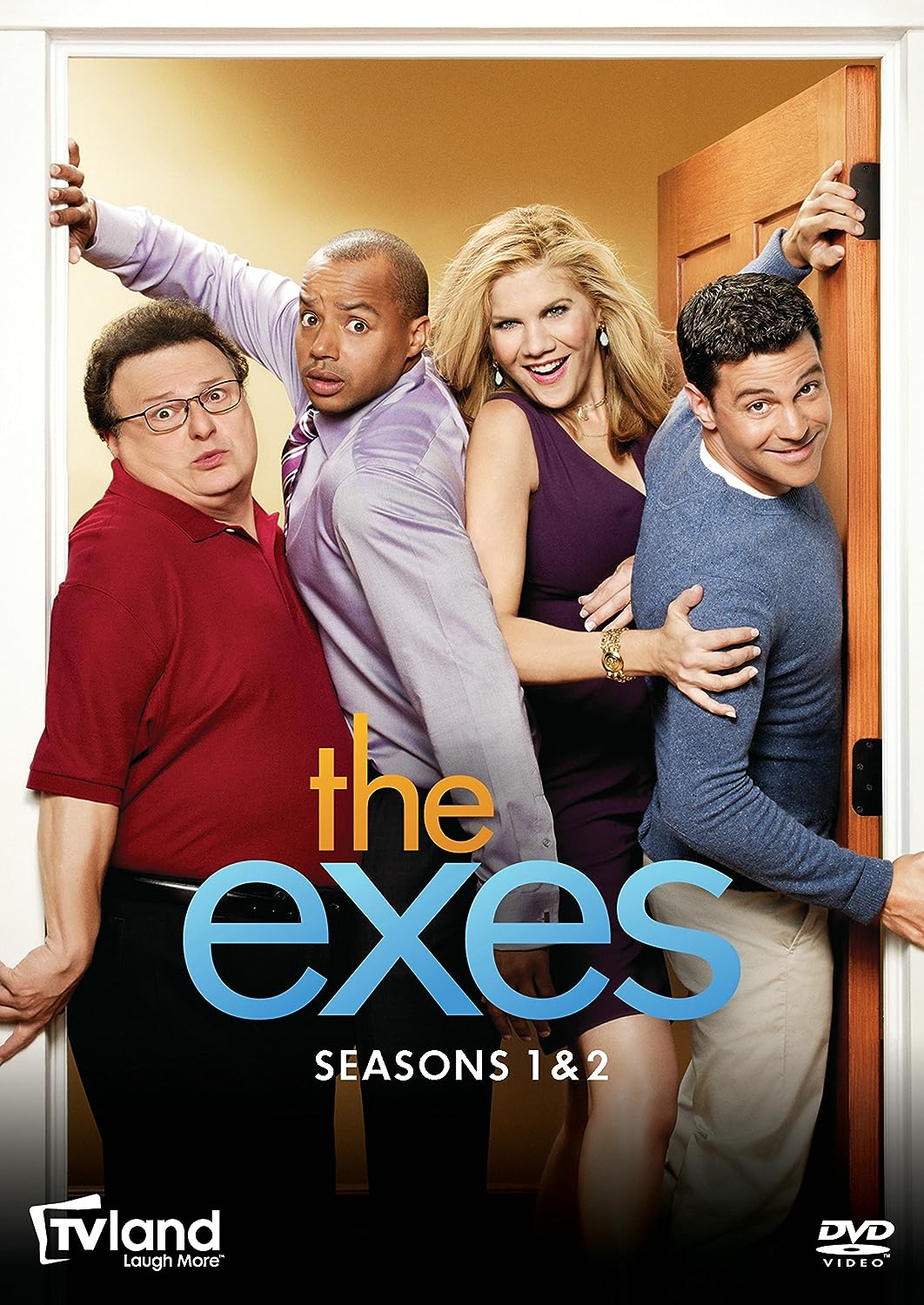 TVLand’s sitcom The Exes is the funniest show on TV right now that you have never seen.  Don’t believe me?  Check out this 3 DVD set of the show’s first two season.  The Exes features modern TV comedy giants. And I’m not just saying hat because yours truly guest starred on an episode in season 2.

Donald Faison from “Scrubs,” Wayne Knight from “Seinfeld,” Kristen Johnston from “Third Rock From The Sun” and the ultra versatile David Allen Basche.  And me.  Combine that much talent with some of sitcom TV’s best writers and you’ve got a whole lot of funny. – KV