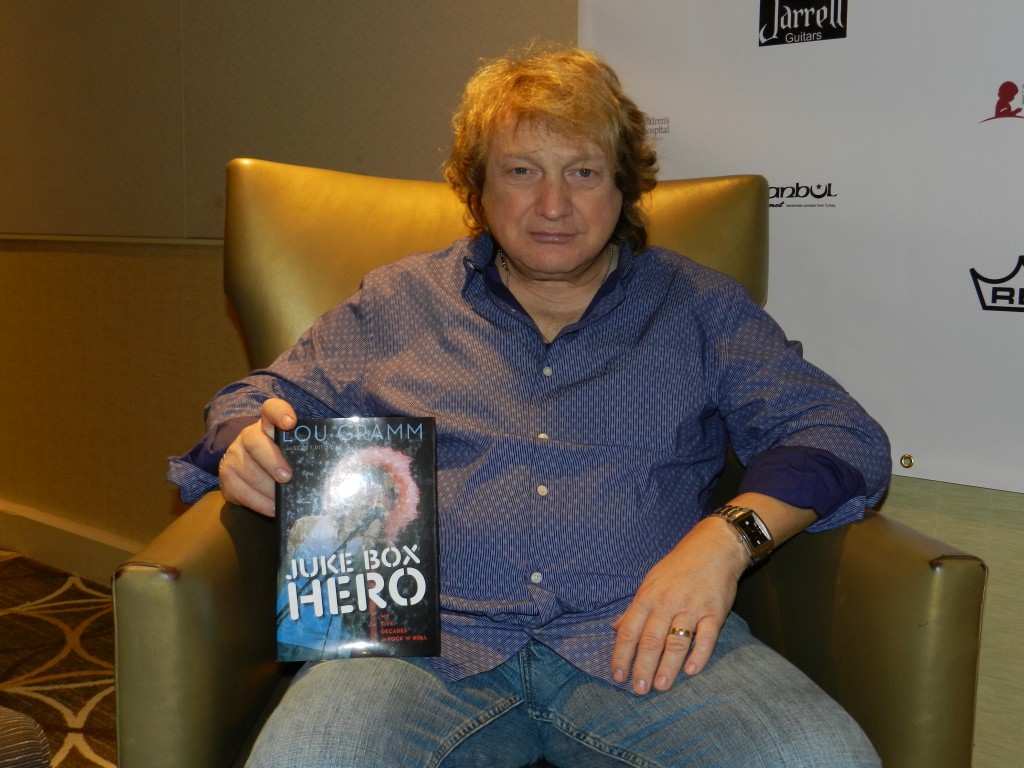 As the lead singer and co-songwriter in Foreigner, Lou Gramm was responsible for creating the anthems of our youth.  “Cold As Ice,” “Jukebox Hero,” “Hot Blooded,” “Double Vision,” “Dirty White Boy,” “Urgent,” “I Want To Know What Love Is,” “Feels Like The First Time” and “Waiting For A Girl Like You” are just a few of the dozens of hits made possible by his amazing voice and unparalleled talent.  Lou Gramm is easily one of the top 5 greatest lead singers of all time, selling over seventy million records worldwide.  When he was diagnosed with a brain tumor in 1997, it seemed that Gramm’s rock star life was over.  As he battled back against the tumor and drug issues, he was replaced as the frontman for Foreigner.

Almost two decades later Gramm is back! Clean, sober and born again, Lou is touring with his own band and promoting his recently released autobiography “Jukebox Hero: My Five Decades In Rock n’ Roll.”

West Coast Bureau Chief Keith Valcourt caught up with the rock and roll survivor to talk about his battle, biography and a possible (long overdue) reunion with former Foreigner band mate Mick Jones.

Rocker: You wrote so many amazing songs.  Do you have a favorite?

Gramm: I have a few that I appreciate a lot: “Jukebox Hero” for sure, “Head Games ,” “Waiting For A Girl Like You,” and “Double Vision.”  There’s quite a few where I not only remember writing them, and how much fun it was to record them, but I still get a huge kick out of playing them live.

Rocker: With so many hits, how do you decide what songs to play live?

Gramm: We have about half a dozen basic milestone songs we always play.  Then we juggle things around them periodically to make sure we’re not doing the same show every night.  It is easy to settle into a particular set if it’s a really good one.

Rocker: Why do you think your songs have such staying power?

Gramm: I know that when those songs were written we took great pains to not follow trends, to not make them follow the path of the flavor of the day.  We wrote songs that we hoped would stand the test of time.

Rocker: When you sat down to write your autobiography “Jukebox Hero: My Five Decades In Rock n’ Roll,” did you discover things you didn’t remember?”

Gramm: I wrote the book with a friend of mine Scott Pitoniak, who is a sportswriter.  He’s written a number of books over the years that sold very well and are respected in the world of sports literature.  This was slightly out of his element, but I could see the similarities enough to know that he could do a great job.  We began getting together once week at my studio and we would talk for 4 to 5 hours.  He had a lot of questions for me that made me recall things that I hadn’t recalled in twenty years.  As you talk, the memories start flowing.  And so do the emotions.  It was really a cathartic experience.  I would leave those writing sessions shattered.

Rocker: Was there anything too painful to put in the book?

Gramm: Not really.  I think anything that there was to talk about in my life or my career was broached.

Rocker: You survived a brain tumor.  How is your health these days?

Gramm: It’s been a while now, and recovery has been slow.  Four or five years after the operation, I was still not firing on all cylinders.  It is what it is though.  While the operation was a success and my life wasn’t in danger, the damage done by the tumor left me less than whole, that is, in terms of functioning as a normal human being.  I had to really work on putting the pieces of my life back together, doing certain day to day things and re- teaching myself.  Because of the tumor my memory of certain things was very spotty.  It was really unfortunate because the area where it was the most spotty were the lyrics to my songs.

I used to be the kind of guy who ran all over the stage.  But after my operation my equilibrium was off.  I wasn’t running anyplace.  I was planted in one place the whole night and I had lyrics pasted to the floor all around me.  It wasn’t that I would forget everything.  I would start the song and the third line in the second verse was just blank to me.  When that point came, I would look down to a certain piece of paper and there it was for me.  I would sing that line and the rest of the song I’d be okay.  Now the memory is getting better and better.  I think my condition is better and better.  I’m feeling stronger.  I dropped a lot of weight that I had gained from the steroids I was taking.  Although I am feeling better I’m getting a little older too.  No more jumping off the lighting rigs for me.

Rocker: Does it bother you that Foreigner has continued without you?

Gramm: I understand that Mick (Jones) is very proud that he started that band and that he still wants to keep the name going.  But the trouble is that now because of his health issues, some nights there is not one real Foreigner in the band.  Yet they still continue playing.  He goes out occasionally and will do half the show.  I feel bad that he has had health problems.  I know he knows now what it was like when I was having problems.  Back then management and he were insistent that we continue touring when my doctors told me I had no business being on the road at all.  Sometimes he plays.  Sometimes he doesn’t.  Sometimes he’ll play half a show or not at all.  When I was in that critical situation it was a little different.  But it’s not fair to the fans.

Rocker: I imagine you have signed a lot of autographs.  What is the strangest thing you’ve ever been asked to sign?

Gramm: The strangest thing I had to sign was a great big woman’s breasts.

Rocker: Were the breasts big or the woman?

Rocker: Are you working on a new solo CD?

Gramm: Possibly.  We have about a half dozen songs written that we are looking and listening hard to. We may put out an E.P. at some point. Also sometime in September I think Mick (Jones) and I are going to get together, which I’m really looking forward to.  We’re gonna see if some of the old magic is there without any catches, glitches or preconceived determinations.  We’re just gonna get together and write.

Rocker: How did this reunion come about?

Gramm: I think when we got inducted into the Songwriters Hall Of Fame in 2013 and we were rehearsing to play live for that show, we had a chance to have lunch and just talk.  I could feel the friendship rekindling again.  Without rushing into anything.  He has his own band.  I have my band.  But I think all we’ve done together and all we’ve been through…  We just kind of loosely committed to seeing if any of that magic is there.  I’m excited about it.